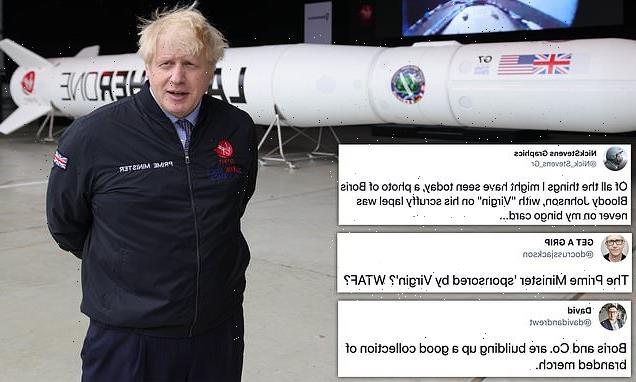 ‘The PM sponsored by Virgin’: Boris Johnson is mocked for his ‘branded merch’ as ministers arrive for G7 in US-style matching bomber jackets

Boris Johnson has raised eyebrows after arriving for the G7 Summit in a U.S. Presidential-style bomber jacket with the words Prime Minister embroidered on the lapel, along with the Virgin logo.

Social media users were quick to question why Mr Johnson appeared to be ‘sponsored by Virgin’ as he made a trip to the company’s rocket, LauncherOne, at the Spaceport at Newquay Airport, Cornwall, yesterday.

The choice of jacket was made even more conspicuous by Transport Secretary Grant Shapps’ matching garb, as he accompanied the PM on the visit ahead of Friday’s G7 summit.

David Taylor tweeted: ‘Boris and Co. are building up a good collection of branded merch.’ 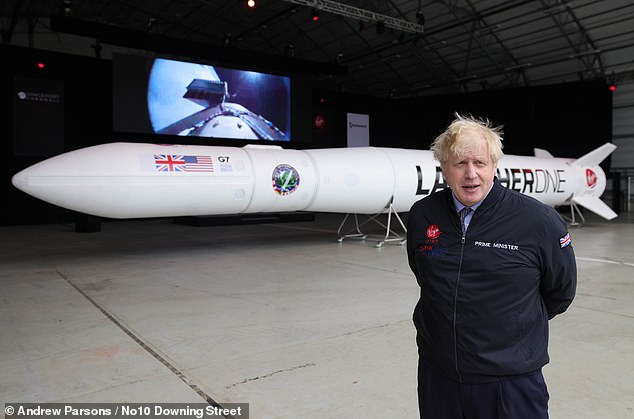 Boris Johnson has raised eyebrows after arriving for the G7 Summit in a U.S. Presidential-style bomber jacket with the words Prime Minister embroidered on the front, along with Virgin logo

A close up of the bomber jacket’s embroidery, which social media users have said makes the PM look like he is ‘sponsored by Virgin’ 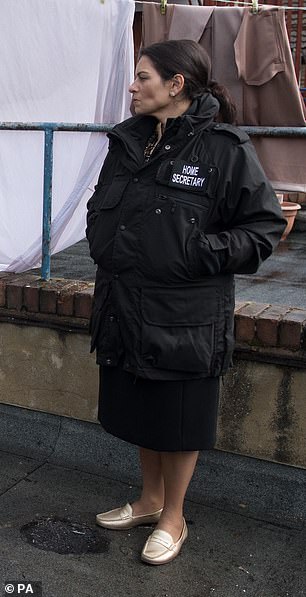 Priti Patel during a National Crime Agency operation in east London, May 2021

While Nick Stevens wrote: ‘Of all the things I might have seen today, a photo of Boris Bloody Johnson, with ‘Virgin’ on his scruffy lapel was never on my bingo card.’

Priti Patel was the first minister to be seen sporting her own ‘branded merchandise’ earlier this year, with social media users criticising her choice to wear a coat with her role ‘home secretary’ embroidered onto the lapel as she attended a raid at an address in east London in May.

Mr Johnson’s bomber jacket also echoes a coat worn by US president Donald Trump and his predecessors, who are each presented with a personalised US Navy flight jacket with their name and ‘Commander-in-Chief’ written on it when joining the role.

Similar jackets were worn by Barack Obama and his predecessor George W Bush, who wore one during a summit with then prime minister Tony Blair.

It is not known if Johnson will wear the jacket to greet Mr Biden today, who he is scheduled to have face-to-face talks with – the first time the two men will have met in person – before the G7 Summit formally gets underway on Friday.

Following Mr Johnson’s visit to the spaceport Virgin Orbit tweeted: ‘We were honored to join our friends from @SpaceCornwall & @spacegovuk to host Prime Minister @BorisJohnson , Sec’t of Transport @grantshapps , & MP @stevedouble today in Spaceport Cornwall, site of the #G7Summit. Together, we’re closer than ever to bringing launch to Britain.’

The Virgin Orbit LauncherOne is poised to bring the first satellite launch to Britain within the next year or two, with the UK Space Agency investing £7.8m into the development of Spaceport Cornwall.

And the UK’s space industry could be set for take-off, as Spaceport Cornwall has been named a ‘favourable potential return location’ for future missions.

An agreement has been signed between Cornwall’s horizontal launch site and Sierra Nevada Corporation’s Sierra Space, located in the US – with Virgin founder Richard Branson previously claiming this will ‘stimulate the space economy, strengthen the US-UK partnership, and inspire a whole new generation of space lovers.’ 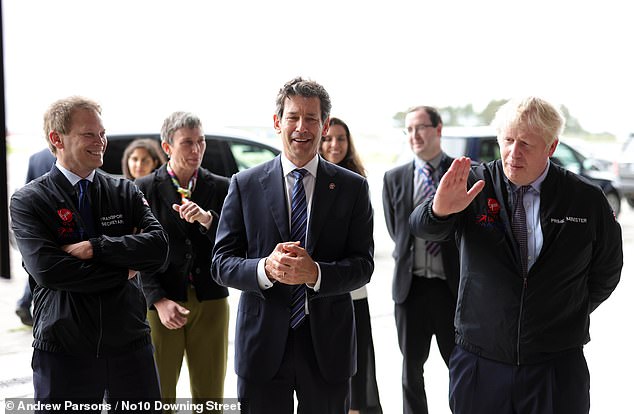 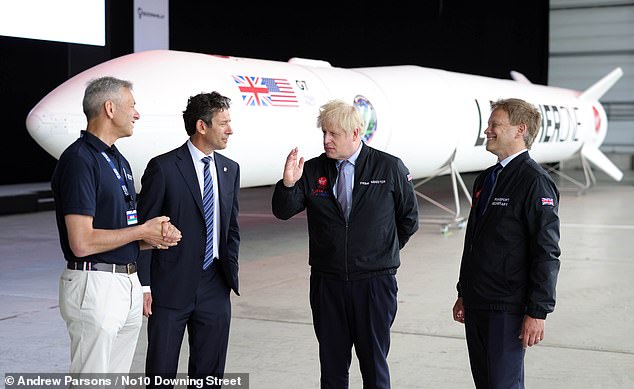 This memorandum of understanding (MoU) covers exploration of future collaboration opportunities and explains that the two companies have a ‘shared vision to democratise space’ – i.e. participating by lowering the cost of access to space.

But the move could also be beneficial for the environment.

Both companies are focused on communicating the vital role satellites can play in combating global climate challenges that world leaders are set to discuss at the G7 summit in Cornwall this week.

The signing of the MoU follows discussions between the two companies over the past two years, as well as the completion of the concept of operations (CONOPS) undertaken by Sierra Space regarding the suitability of Spaceport Cornwall to be a return location for its runway landing, Dream Chaser.

In an exciting advancement for the UK space industry, the study found Spaceport Cornwall to be a top candidate – and this is likely to lead to a more detailed landing site study ahead of Cornwall being named a planned return location for future missions.

Melissa Thorpe, head of Spaceport Cornwall said today: ‘We are delighted to welcome representatives from Sierra Space to Cornwall during the G7 Summit, and to announce the signing of the MoU.

‘Spaceport Cornwall is a multi-user spaceport and it’s a great achievement to add an additional launch/re-entry partner to our consortium a year ahead of first launch from the site in 2022.

‘Satellite technology offers so much hope in combating many of the environmental challenges being discussed here this week, and we’re proud to be able to showcase the part Cornwall, and the UK is playing.’