Boris Johnson has again claimed that there will be no checks on trade between Great Britain and Northern Ireland after Brexit.

The prime minister dismissed a leaked document brandished by Jeremy Corbyn last week which suggested that some checks would take place.

Brexit secretary Stephen Barclay has also indicated there will be checks, and fears of a ‘border in the Irish Sea’ were among the reasons which led the DUP to vote against Mr Johnson’s deal.

However, the prime minister told Sky News today that the leaked documents are wrong and that there was ‘no question’ of checks taking place unless goods were moving on to the Republic of Ireland.

Asked by interviewer Sophy Ridge if there would be checks, Mr Johnson replied: ‘No, absolutely not.

‘Unlike the previous arrangements it allows the whole of the UK to come out of the EU including Northern Ireland.

‘The only checks that there would be, would be if something was coming from GB via Northern Ireland and was going on to the Republic, then there might be checks at the border into Northern Ireland.’

Pressed on whether he was saying the leaked document was wrong, he said: ‘Yes. Because there’s no question of there being checks on goods going NI/GB or GB/NI.

‘We’re part of the same customs territory and it’s very clear that there should be unfettered access between Northern Ireland and the rest of GB.

‘This is another of these things that has been produced by the Labour party as a kind of distraction.’ 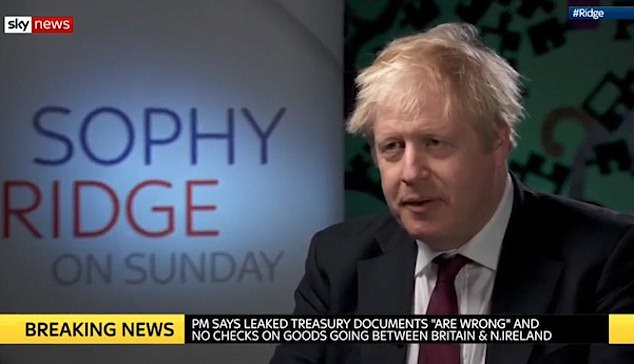 Asked if he was ‘wilfully misleading people’ by contradicting the leaked papers, Mr Johnson said: ‘No, the whole of the UK comes out of the EU.

‘We’re a UK government, why would we put checks on goods going from NI to GB or GB to NI? It doesn’t make sense.

‘So the issue is how to avoid a hard border in Northern Ireland and we can do that by making sure that there are – by having some checks on goods that might be preceding into the Republic.’

Last Friday Jeremy Corbyn said he had obtained a leaked report which indicated there would be checks between Great Britain and Northern Ireland.

‘What we have here is a confidential report by Johnson’s own government, marked ‘official, sensitive’, that exposes the falsehoods that Boris Johnson has been putting forward,’ Mr Corbyn said.

The Labour leader said the document ‘drives a coach and horses through Boris Johnson’s claim that there will be no border in the Irish Sea.’

Quoting from the Treasury analysis, Mr Corbyn said that ‘there will be customs declarations and security checks between Northern Ireland and Great Britain’. 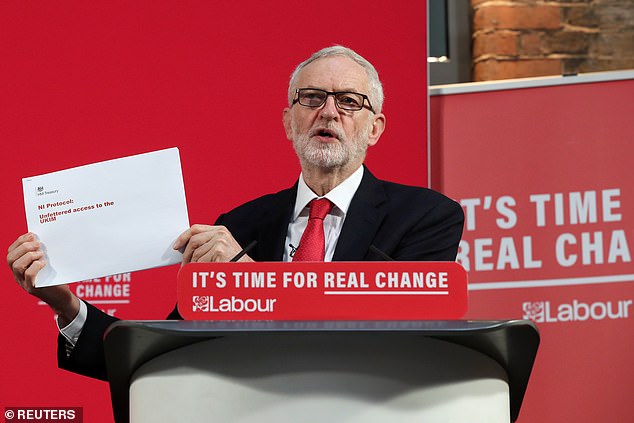 Brexit secretary Stephen Barclay said last month that ‘some information’ and ‘minimal targeted interventions’ would be required on goods travelling across the Irish Sea.

However, the PM suggested that Mr Barclay was wrong and insists there will be no such checks.

Under Mr Johnson’s deal, Northern Ireland would align with the EU’s single market rules in order to prevent checks on the border with the Republic of Ireland.

It is feared that any barriers erected on the island of Ireland would become a target of sectarian violence.

However, Mr Johnson has faced criticism from Ulster politicians who believe the deal will create a so-called ‘border down the Irish sea’.

The DUP, which had been propping up the Tory minority government since 2017, joined with Labour to block Mr Johnson’s timetable for passing his deal.

That forced Mr Johnson to agree a further Brexit delay beyond the previous October 31 deadline, and MPs voted for an election shortly afterwards.