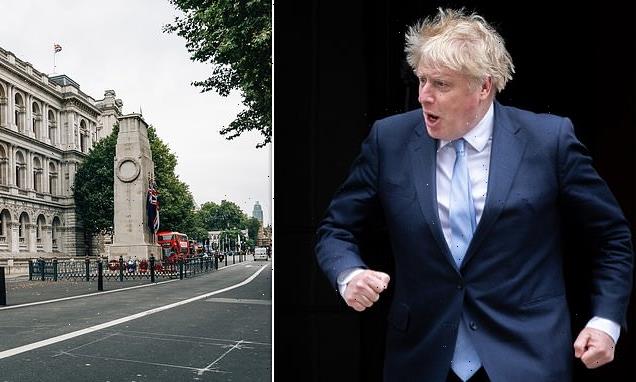 Stop raiding the fridge and get back to the office: Boris Johnson blasts ‘WFH’ culture which sees employees ‘forget what they are doing because they are eating cheese and making coffee’

Boris Johnson today began a personal battle to get millions of Britons back to the office full time as he declared working from home just doesn’t work.

In an exclusive interview with the Daily Mail, published on our new premium sister website The Mail+, the Prime Minister issued a rallying cry to businesses to help boost post-pandemic productivity and revitalise the UK’s town and city centres.

Mr Johnson even admitted that his own struggles with working from home – including ‘forgetting what it was you’re doing’ when you go to the fridge or struggling with Zoom calls – convinced him that Britain’s workforce is better off out of their spare rooms or kitchens and back at their desks.

He said: ‘We need to get back into the habit of getting into the office. I believe people are more productive, more energetic, more full of ideas, when they are surrounded by other people.

‘My experience of working from home is you spend an awful lot of time making another cup of coffee, and then you know, getting up, walking very slowly to the fridge, hacking off a small piece of cheese, then walking very slowly back to your laptop and then forgetting what it was you’re doing’.

It came as Mr Johnson revealed plans to cut 91,000 civil servant jobs and use the £3.5billion to help pay for tax cuts to ease the cost of living crisis. Today Jacob Rees-Mogg warned that union pressure to allow working from home as standard will drive investment out of the UK.

You can read the full interview with the Prime Minister now on our new premium sister website The Mail+. The Mail+ is where subscribers can enjoy the Mail newspapers and our brilliant magazines every day – AND save nearly £20 a month on the print cover price. 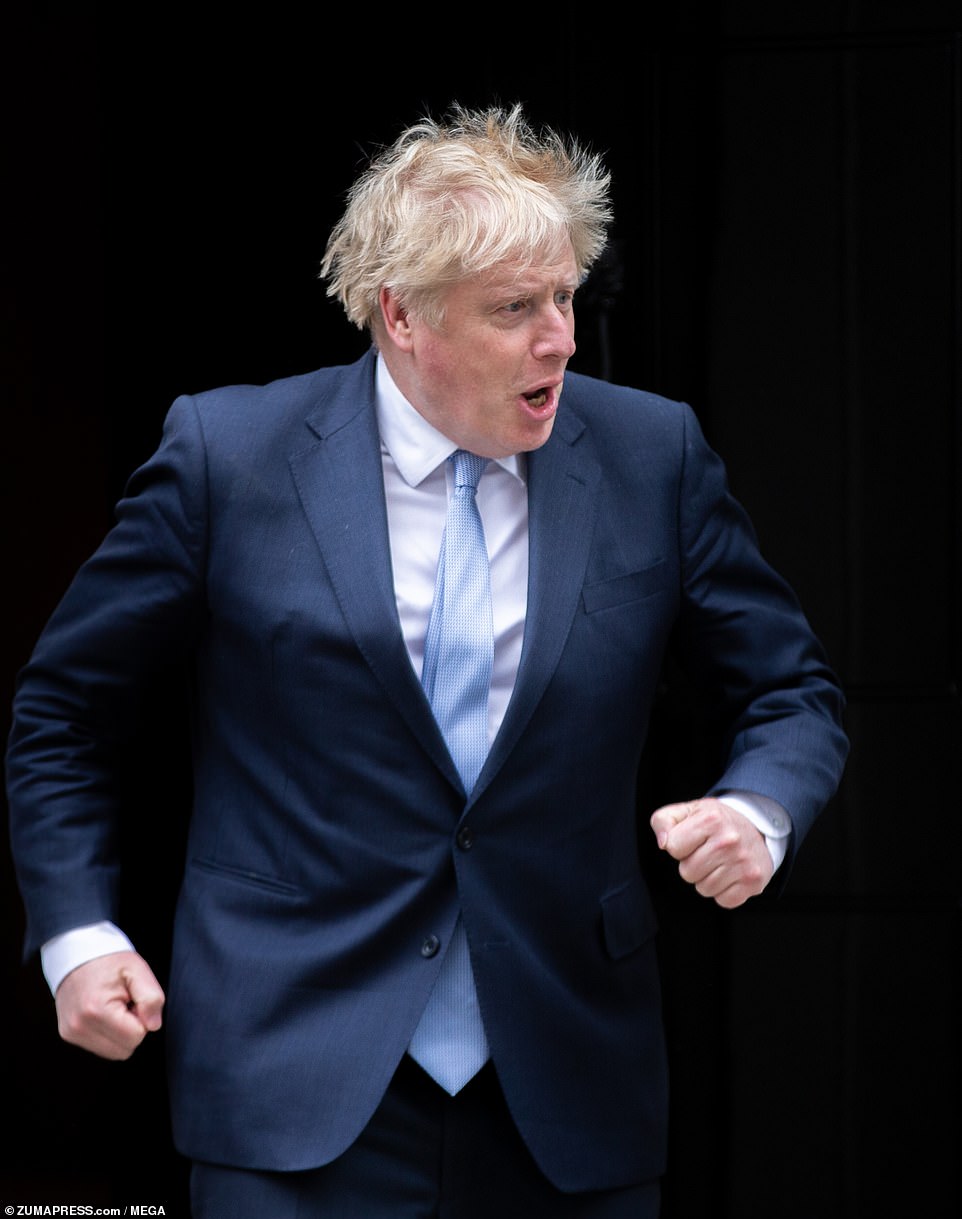 Boris Johnson today began a personal battle to get millions of Britons back to the office full time as he declared working from home just doesn’t work.  Mr Johnson even admitted that his own struggles with working from home – including ‘forgetting what it was you’re doing’ when you go to the fridge or struggling with Zoom calls – convinced him that Britain’s workforce is better off out of their spare rooms or kitchens and back at their desks

Unions threaten NATIONAL STRIKE over Boris Johnson’s plan to slimline the Civil Service and axe 91,000 jobs as Jacob Rees-Mogg says cull to save £3.5billion WILL work because Brexit is done and they are no longer needed

Union leaders threatened a mass walkout of civil servants today as they reacted with fury to Boris Johnson’s plans to cull almost a fifth of all Whitehall jobs.

The Prime Minister announced plans to axe up to 91,000 jobs over the next three years to save £3.5billion and give his under-pressure Government space for a pre-election tax cut for struggling families.

He used a ‘cost of living’ Cabinet meeting in the Midlands yesterday to order his top team to find ways to cut the headcount in all departments of Whitehall within a month, saying the Civil Service had become ‘swollen’ during the pandemic.

Mark Serwotka, head of the Public and Commercial Services union (PCS), said it would hold an emergency meeting of its executive committee next week, saying: ‘Our members will not be the scapegoats for a failing Government. We have our conference in 10 days’ time. Taking national strike action is very much on the table.’

Mr Johnson also faced opposition from his critics within the Conservative Party. Former minister Tobias Ellwood accused ministers of setting up a ‘Dead Cat Committee in No.10 spewing out a regular drumbeat of sensationalist headlines’.

‘It’s not about numbers, but outputs and productivity – the engine driving wider inspirational policy objectives that thematically sit together as a vision,’ he tweeted.

But Jacob Rees-Mogg said the PM’s decision to axe 91,000 posts within three years would simply take Whitehall numbers back to their pre 2016 levels, after they were swollen by the EU departure and Covid. 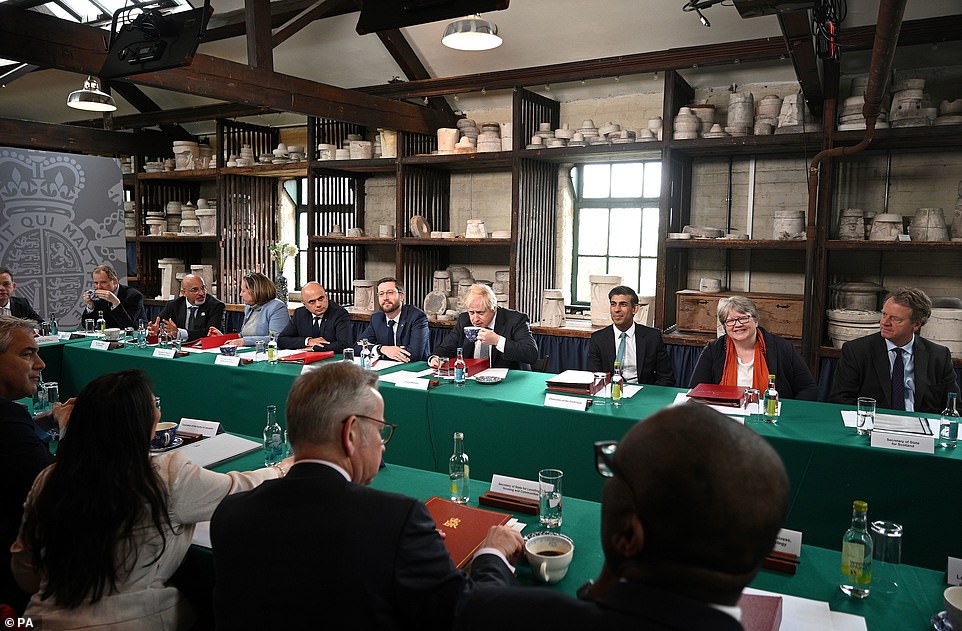 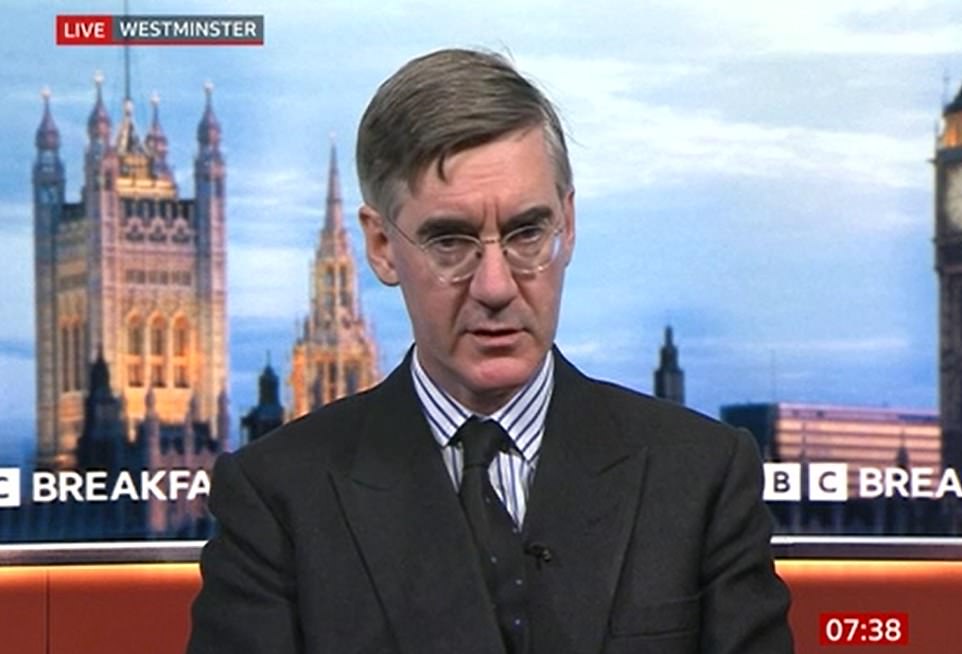 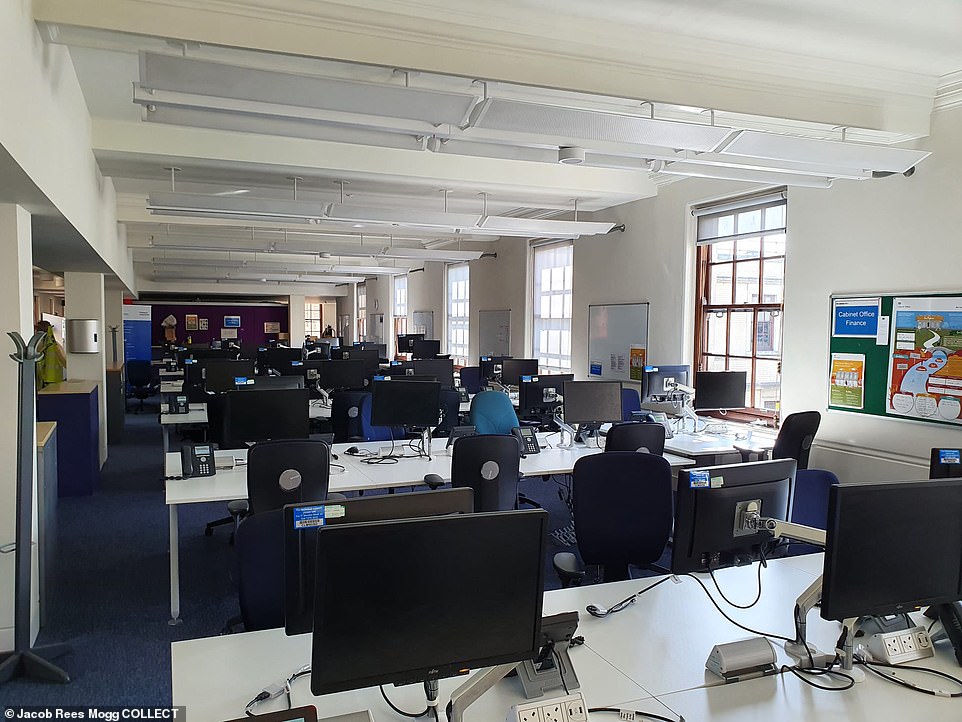 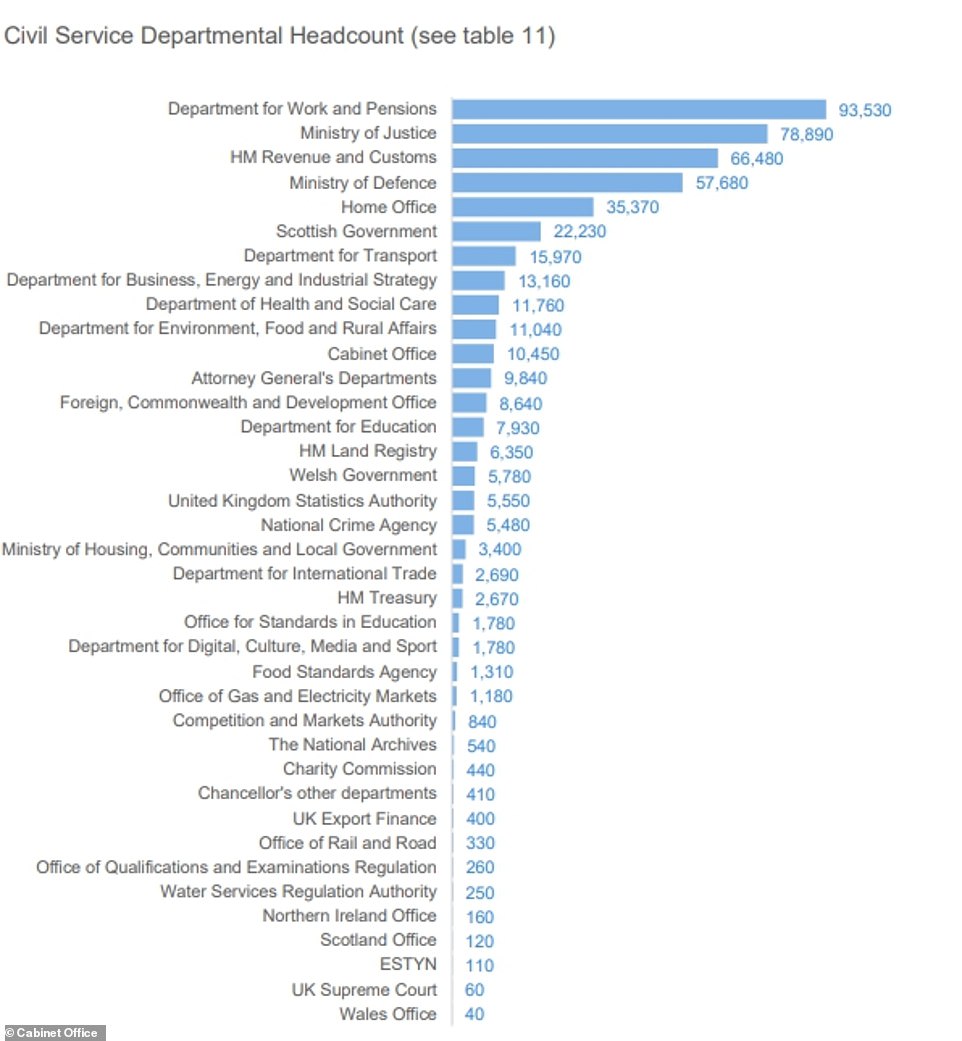 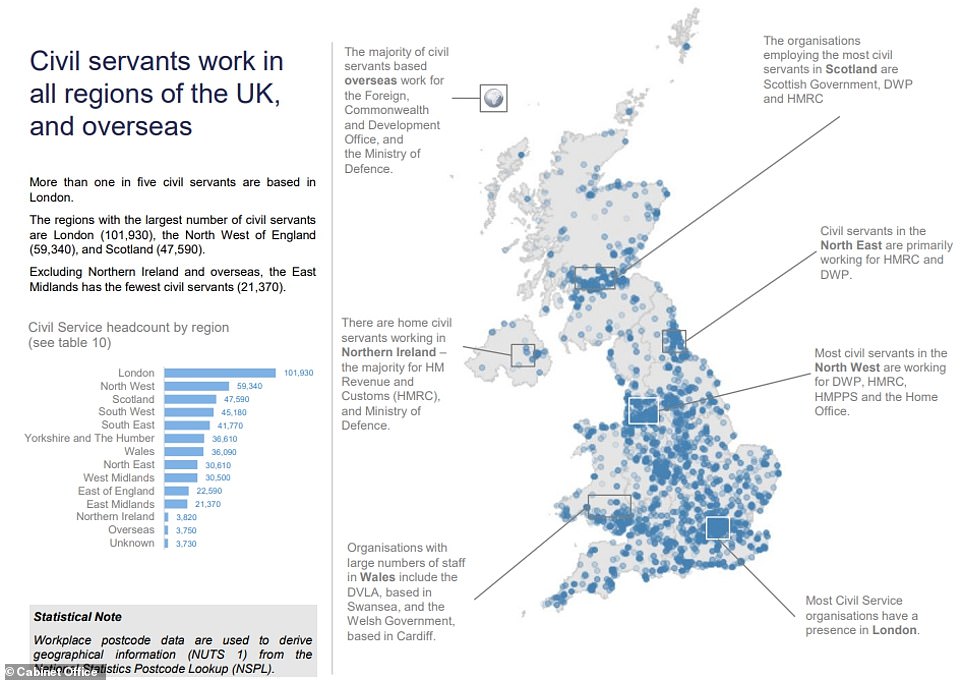 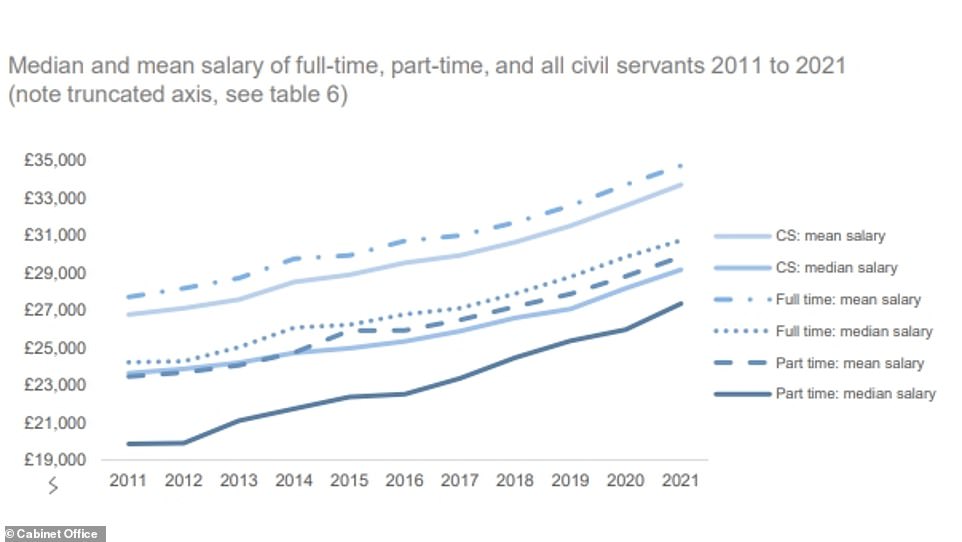 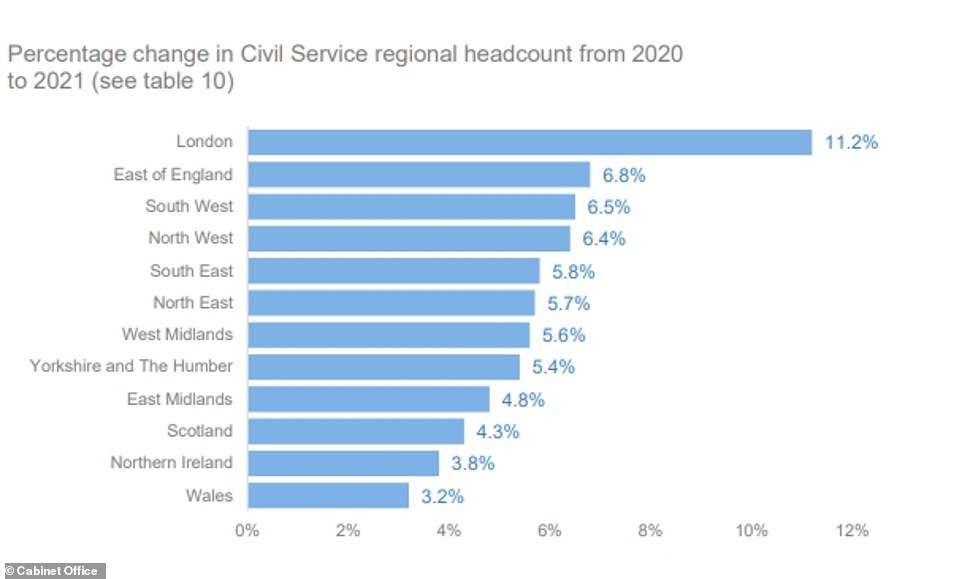 Rees-Mogg quizzed over size of his entourage

Jacob Rees-Mogg found himself in hot water as he faced questions about why he had turned up with possibly as many as four advisers to interviews defending civil service job cuts.

The Brexit opportunities and Government efficiency minister toured the broadcast studios on Friday to argue in favour of Boris Johnson’s plan of slashing around 90,000 Whitehall jobs in a bid to save taxpayers’ money.

The Cabinet minister said the cuts were designed to bring numbers ‘back to normal’ levels after extra staff were brought in to help deal with the Covid-19 pandemic and the impact of Brexit in 2016.

During his appearance on Sky News, Mr Rees-Mogg was asked whether he might consider slimming down his own operation after bringing ‘three, four’ aides with him for the interview.

But the former Commons leader defended the size of his support team, arguing that he has a ‘very wide area of public policy’ within his brief.

Presenter Niall Paterson asked the minister: ‘How many advisers did you arrive with this morning?

‘Because it looked like more than two. Three, four?’

Mr Rees-Mogg replied: ‘Yes, they don’t all work directly for me.

‘They work within the Cabinet Office.

‘Two work within the Cabinet Office and two are my special advisers.’

Mr Paterson followed up, asking: ‘Do you perhaps detect an opportunity for some efficiency savings there?’

The minister said: ‘I cover a very wide area of public policy, but there should be efficiency throughout the civil service.

He told Sky News: ‘I know it sounds eye-catching but it’s just getting back to the civil service we had in 2016… since then we’ve had to take on people for specific tasks.

‘So dealing with the aftermath of Brexit and dealing with Covid, so there’s been a reason for that increase, but we’re now trying to get back to normal.’

Mr Johnson last night told the Daily Mail: ‘We have got to cut the cost of government to reduce the cost of living.’

And he suggested the billions saved could be ploughed into tax cuts, saying: ‘Every pound the Government pre-empts from the taxpayer is money they can spend on their own priorities, on their own lives.’

Dave Penman, general secretary of the FDA union for civil and public service workers, accused the Government of ‘picking a number out of the air’.

He told BBC Radio 4’s Today Programme that part of civil servants’ jobs was to look at efficiency.

‘They’ve already committed to 5 per cent cuts in their budgets as part of the spending review,’ he said.

‘That kind of ongoing efficiency is what the civil service does all the time. But if you’re going to just simply pluck a figure out of the air and say it’s now 90,000 because there’s a convenient point in time where we liked the number, that’s not a serious way to look at what does a government want to do and how can it deliver that in the most effective and efficient way.’

The PM’s chief of staff, Steve Barclay, is also investigating plans to use new technology, including artificial intelligence systems, to improve efficiency at struggling agencies such as the Passport Office and DVLA.

Mr Johnson said the public ‘deserve better’ from organisations which have allowed huge backlogs to build up.

‘There will be lots of people who disagree with me, but I believe people are more productive, more energetic, more full of ideas, when they are surrounded by other people.’

But the PM said technology also had a major role to play in improving efficiency – and potentially cutting the cost of official documents such as passports. ‘I’m not antediluvian about technology,’ he said.

‘Things like Zoom and Teams can increase productivity, rather than just be an excuse for people to stay at home.

‘We should be asking ourselves, why does it cost so much for a passport? Often it’s because the cost has been jacked up over the years to support the cost of the organisation providing them.

‘What is the chief driver of those costs? Headcount. If we can do more with AI… potentially it could be cheaper.’

The move will put ministers on a collision course with the powerful Civil Service unions, which are already complaining bitterly about a Government drive to persuade thousands of staff to return to their desks after the pandemic.

There were fresh calls yesterday for Rishi Sunak to cut taxes after official figures showed that the economy unexpectedly shrank by 0.1 per cent in March – even before the latest round of energy price hikes last month. 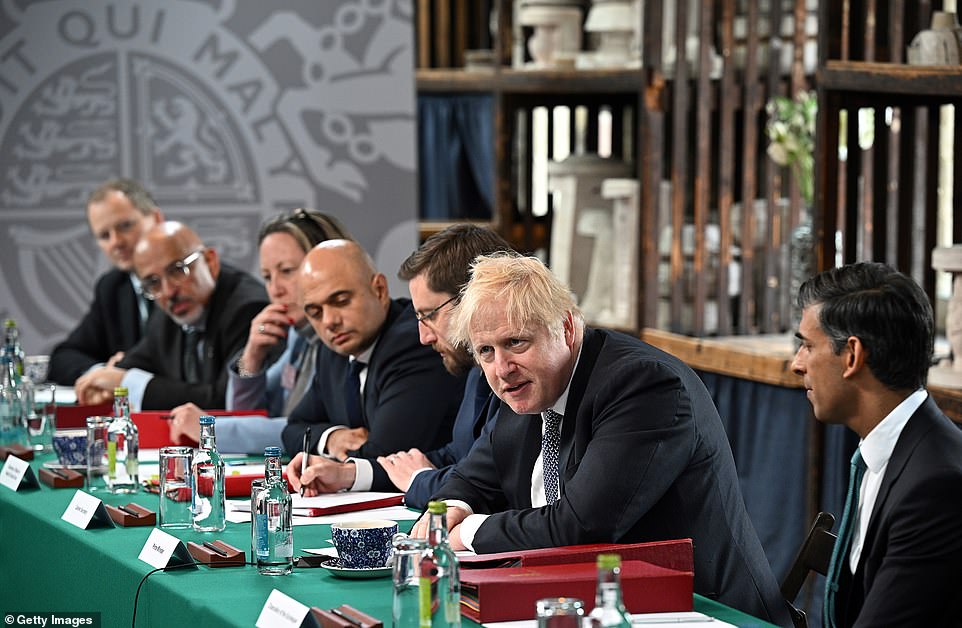 NatWest chairman Sir Howard Davies urged ministers to focus on helping the worst-off households, pointing out that the poorest fifth of the population will have to cut their non-essential spending by 20 per cent.

Meanwhile, Mr Johnson followed Chancellor Mr Sunak in saying he would look at introducing a windfall tax on the profits of energy giants to help struggling families.

BP sought to head off pressure for such a levy by announcing it would reinvest all its profits from North Sea oil and gas over the next decade back into the UK.

The PM’s plan to reduce civil servant numbers comes at a time when ministers are grappling with the so-called Whitehall ‘Blob’ over a range of issues, including Brexit.

A Government source said the Civil Service had become bloated during the pandemic and needed to be cut down.

The source said it was right that the Government makes renewed efforts to tighten its belt in the same way that businesses and families are doing.

‘All businesses are looking at ways they can reduce their costs and increase performance and government should be no different,’ the source said.

‘We have seen the Civil Service headcount rise by 90,000 since 2016. A lot of that was pandemic-related and it was the right thing to do at the time.

‘But we are past the pandemic now and we cannot let this bigger state become the new normal – we need to get back to pre-pandemic levels. 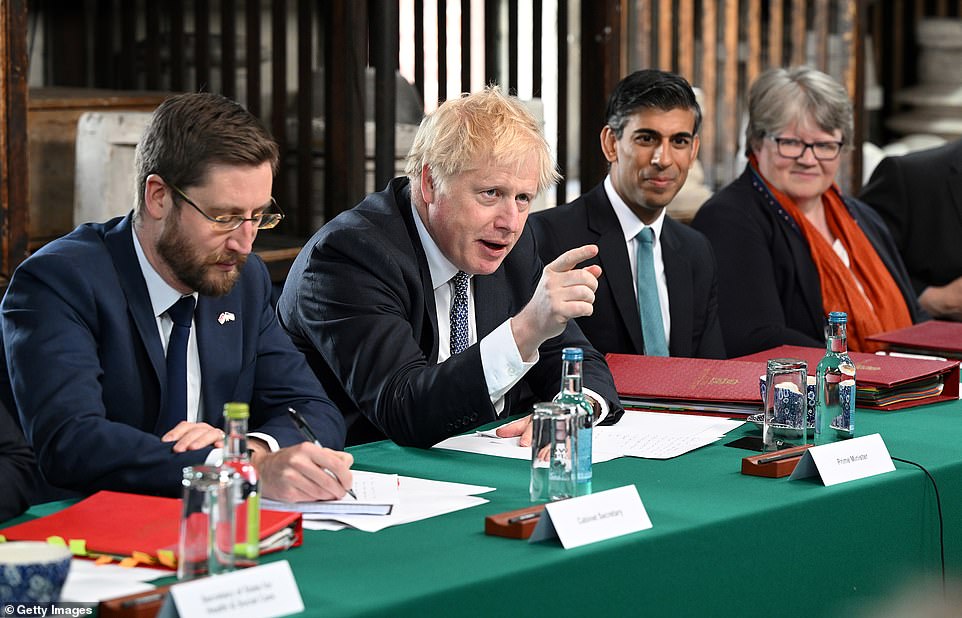 The Prime Minister has said the Civil Service became ‘swollen’ during the pandemic and more than 90,000 jobs had to go 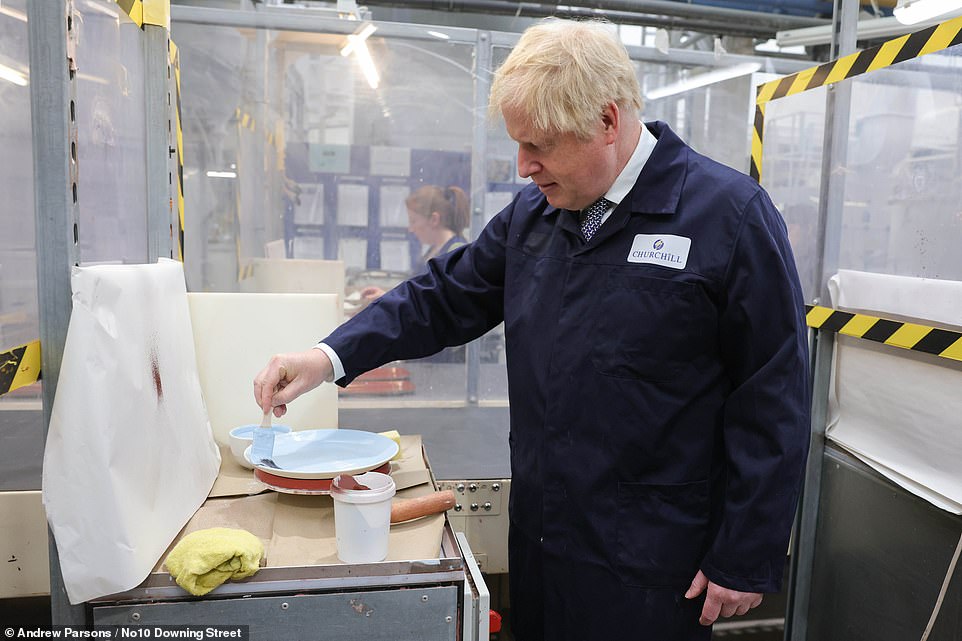 ‘It will help save a substantial amount of money, freeing up resources that could be used to help people with the cost of living.’

The current Civil Service headcount stands at 475,000, the highest level since 2010. Ministers have been given two years to reduce that total by 91,000.

Downing Street declined to put a figure on the estimated savings, but the average civil servant earns £28,100, with other costs such as National Insurance and pensions adding around £10,000 to the wage bill.

But Jacob Rees-Mogg warned the Cabinet yesterday that compulsory redundancies may be needed.

He said the cuts would restore the Civil Service to the size it was a decade ago, adding: ‘It has been done before and it can be done again.’

Mr Rees-Mogg, the minister for government efficiency, outlined the plans to the Cabinet yesterday when ministers gathered in Stoke-on-Trent to discuss ways to accelerate action on tackling the cost of living.

He said that on current projections the Civil Service was due to expand over the next three years, ‘despite the requirements of Brexit and the pandemic now receding’.

Ministers were told that 30,000 to 40,000 civil servants leave every year, meaning major reductions could be achieved through recruitment freezes.