As Demons fans will tell you, it almost had to be this way.

A dominant preliminary final win over Geelong, the best chance for a Melbourne flag since 1964 and yet the grand final will be held at Optus Stadium in Perth, more than 2700 kilometres from the MCG.

The Greeks call it pathos but for Melbourne’s long-suffering fan base, heartbreak is standard operating procedure. 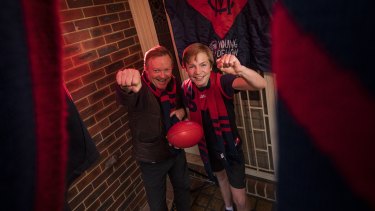 Diehard Melbourne Demons supporters Stephen and James Le Get can’t wait for their team to play in the grand final. Credit:Chris Hopkins

It’s a feeling they know all too well in the members’ stand – from the long periods without success to the early losses of club figures like Jim Stynes, Troy Broadbridge, Dean Bailey, Colin Sylvia and Robbie Flower.

Having it all their own way would have been un-Demon like.

“If you’re not a Melbourne supporter you can’t appreciate what we’ve been through in our lifetimes,” says Stephen Le Get, president of Demons fan group the Tragics.

“There’s that shared pain and the ride we’re on. They’ve got to win this thing, bank the flag.”

Melbourne fans have long given up hope of getting to WA to watch their team in the grand final. The border has been slammed shut to Victorians except for rare exemptions, with transit states such as SA, the NT and Tasmania also blocking entry.

Short of chartering a yacht and swimming to shore, there’s no way in. It hasn’t stopped Dees fans from revelling in what their team has achieved. 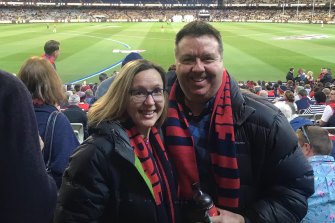 On Friday night, the Demons produced the complete performance as captain Max Gawn kicked five goals on the way to an 83-point win.

It’s given Melbourne priceless momentum going into the grand final in two weeks time, as well as the feeling of destiny that the drought will be broken – a bit like the Bulldogs in 2016 and Tigers in 2017.

“The last month has felt like this is the best opportunity for a flag,” said Mr Le Get, 52.

“This is what it takes to break the curse of Norm Smith, the Red Fox.”

The last time Melbourne reached a grand final was in 2000, when they ran into the all-conquering Essendon and lost by 10 goals. Before that was 1988 and a 96-point loss to Hawthorn.

“I was there for both grand finals,” says Mr Le Get. “The club has rebuilt itself and it makes you proud to be a Dees supporter.”

Karen O’Donoghue, 60, was born a few years before the last Demons premiership in 1964 but can’t remember it as she was too young.

Her emotional state after the win on Friday night was split between the joy of making a grand final and disappointment of not being able to go.

“I’ve been to many a game where we’ve lost and come home sad and all of that,” she said.

“You dream you are going to see your team in the grand final with your family and the people you have been to games with all your life. It’s just bittersweet I suppose.”

After being burnt so many times, Demons fans have refused to get ahead of themselves despite being near the top of the ladder all year. That doubt is now being replaced with belief.

“We just didn’t believe, we thought something’s going to fall apart, something will happen. It’s not going to continue,” she said.

“It was really only the last five games where I thought ‘this is actually happening’ – you can see the bond between players and coach.” 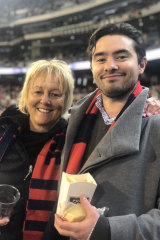 Chris Quin, 52, had flights and accommodation booked in Perth weeks ago just in case he could get there for the game.

“I would have loved it to be like 2017 when the Richmond fans won and spilled to Swan Street,” he said.

“To wait 57 years and then just get a little kick in the guts, it’s like ‘you’re Demons you can’t have it too easy’.”

He recalled going to a game 10 years ago with his daughter when the Demons were at the bottom of the ladder and being asked: “Dad, why do we support such a shit team?”

Since then, he’s watched coaches Paul Roos and then Simon Goodwin build a team that looks very capable of winning the big one.

“We’re there and feeling hopeful,” he said. “I think it’s our time.”