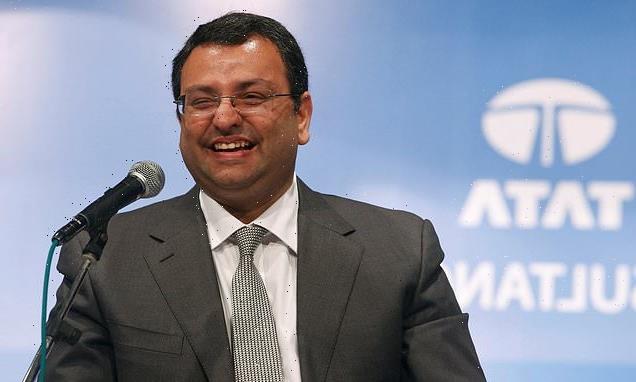 Billionaire former chairman of India’s Tata group dies in car crash: Cyrus Mistry, 54, who was ousted in boardroom coup in 2016, is killed in smash that left one other dead and two injured

India’s prime minister has led tributes to one of the country’s most prominent businessmen, who was famously ousted in a boardroom coup in 2016, who was killed today in a road accident.

Narendra Modi described the billionaire former chairman of Tata, India’s largest conglomerate which has an annual revenue of $128billion, Cyrus Mistry as a ‘promising business leader’ and said his ‘passing away is a big loss to the world of commerce and industry’.

Mr Mistry, 54, was travelling from Ahmedabad to Mumbai when the Mercedes he was in hit a divider on a bridge in Palghar at around 3.15pm today.

One other person was killed and two passengers were injured, police in India’s western Maharastra state said. Mr Mistry’s body was taken to the Kasa Rural Hospital in Gujarat for a post-mortem examination.

The news is the latest blow for the Mistry family, which lost its patriarch Pallonji Mistry just two months ago at the age of 93. 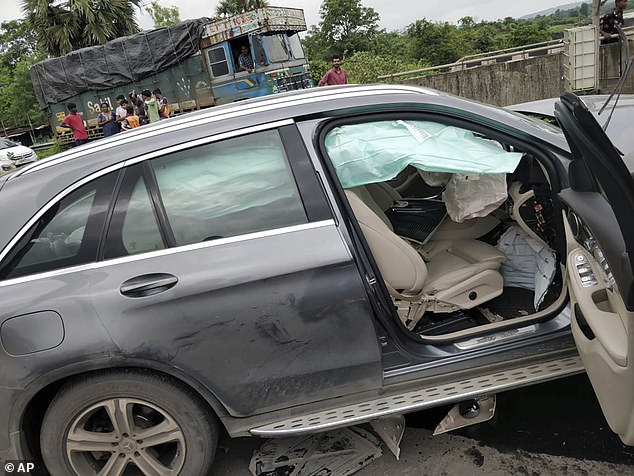 Cyrus Mistry, 54, died at the scene of a car crash today, when the Mercedes he was travelling in (pictured) collided with a divider on a bridge in Palghar 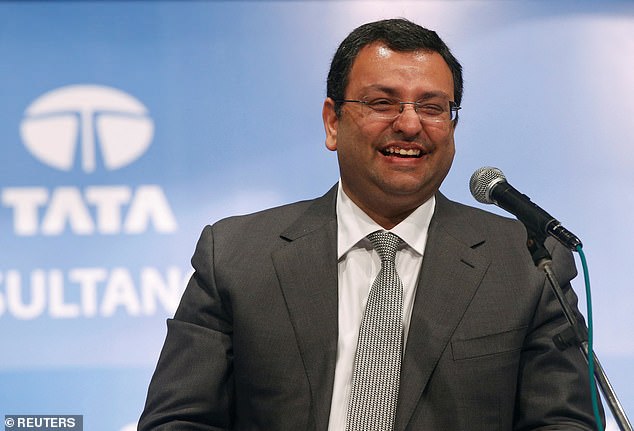 Mr Mistry was chairman of Tata, India’s largest conglomerate, from 2012 to 2016 (pictured at the company’s annual general meeting in 2014)

The family construction company, Shapoorji Pallonji, which started more than 150 years ago and today employs more than 50,000 people, has built iconic buildings including the Oberoi Hotel in Mumbai and the blue-and-gold Al Alam palace for the Sultan of Oman.

But Pallonji Mistry made his real fortune from being the largest individual shareholder- 18.5% as of early 2022- in Tata Sons, a trading group with interests in everything from construction to chemicals to communications and which owns Tetley Tea and Jaguar Land Rover.

His son Cyrus was named chairman of Tata Sons in 2012, becoming only the second top official not to bear the Tata family name. But he was publicly ousted just four years later following criticism of his performance.

The courtroom battle between Cyrus and his replacement, Ratan Tata, sparked a long-running legal battle in which India’s top court eventually ruled in Tata Group’s favour by saying that Cyrus’s ouster was legal.

Cyrus’s older brother, Shapoor Mistry, is chairman of the SP Group, one of India’s largest construction firms. The siblings, who along with their two sisters became automatic Irish citizens by virtue of their Dublin-born mother Patsy Perin Dubash, set up venture capital firm Mistry Ventures LLP in 2018.

India’s prime minister Narendra Modi led tributes to the businessman, saying that his ‘passing away is a big loss to the world of commerce and industry’

A graduate in civil engineering from London’s Imperial College and in management from the London Business School, Cyrus Mistry described himself as a voracious reader of business books and a golfer, and shared his family’s love of horses.

He is survived by his wife Rohiqa and their two sons, Firoz and Zahan.

Several prominent politicians and industrialists tweeted their condolences after news of the 54-year-old’s passing was reported including Tata Sons chairman N. Chandrasekaren, who said he was ‘deeply saddened by the sudden and untimely demise’ of Mr Mistry, who he described as having had ‘a passion for life’.

Meanwhile, Indian politician Devendra Fadnavis, the current Deputy Chief Minister of Maharashtra, paid a ‘heartfelt tribute’ to Mr Mistry, who he described as modest and a great personality.

He added that the Director General of Police had been asked to conduct a thorough investigation into the accident.