Why you shouldn’t overtake on a blind bend: Biker and pillion passenger are flung across the tarmac after oncoming car smashes into them when they try reckless manoeuvre

This is the heart-stopping moment a biker and his pillion passenger are thrown from their vehicle after smashing into an oncoming car.

Dashcam footage shows the motorcycle attempting to overtake a recreational vehicle on a blind bend before colliding with a car travelling in the opposite direction – sending the biker and his passenger rolling across the road.

The GPS co-ordinates on the car’s dashcam reveal the incident took place yesterday near Opolzneve in the Crimean Peninsula, Ukraine.

Parts of the bike and the rider’s belongings scatter across the tarmac as traffic comes to a halt around them.

Following the crash, both people who were on the motorcycle start slowly getting up.

Concerned motorists from other vehicles rush out to check if the biker and passenger are okay.

The footage was uploaded to social media, and commenters criticised the biker for the daring manoeuvre. 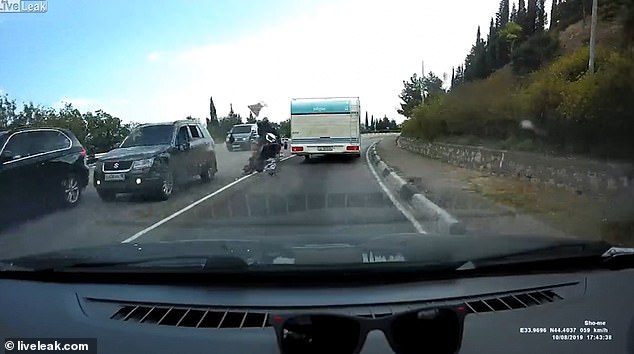 The footage was uploaded to social media, and commenters criticised the biker for the daring manoeuvre 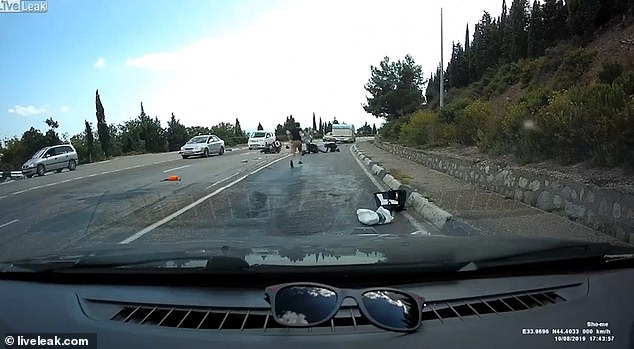 One said: ‘Well, that wasn’t reckless, that was suicidal.’

Another said: ‘Recklesss move. Thank God they had helmets on. Would be been like smashing a watermelon.’

A third said: ‘You ride like that WITH A PASSENGER?’