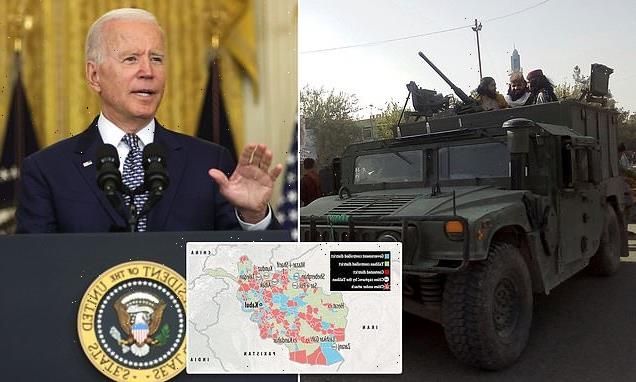 President Biden stood his ground Tuesday on the decision to withdraw all US forces from Afghanistan, shifting focus to the nation’s own military might as he said, ‘they’ve got to want to fight.’

Biden has ordered all U.S. troops out of Afghanistan by the end of August, leaving the country without the aid of US forces for the first time in two decades, as the Taliban bludgeon Afghan Security Forces and capture key cities across the nation.

‘I do not regret my decision’ to withdraw, the president continued.

‘We spent over a trillion dollars over 20 years, we trained and equipped with modern equipment over 300,000 afghan forces. And afghan leaders have to come together. We lost, death and injured thousands of American personnel,’ he explained to reporters in a news briefing.

Biden said the US would continue to heavily subsidize Afghanistan’s fight against the Islamist group, with close air support, resupplying their military, providing food and equipment and paying salaries. ‘But they’ve got to want to fight,’ Biden emphasized.

Taliban forces have shown no signs of slowing their rapid advance. In the past week they have taken six out of 34 provincial capitals.

Meanwhile, a U.S. peace envoy arrived in the Middle East on Tuesday morning to deliver a warning to Taliban negotiators as their fighters press forward across Afghanistan: A Taliban government that takes power through violence will not be recognized.

Zalmay Khalilzad, the U.S. Special Representative for Afghanistan Reconciliation, landed in Doha, Qatar, where the Taliban have a political office to tell them to commit to peace talks, which have stalled as insurgents captured city after city.

His officials are intent on persuading Taliban leaders to return to talks, but their words have been ridiculed by regional experts who say Washington is out of touch.

And the U.N. says it is receiving reports of atrocities against civilians that may amount to war crimes.

The State Department said Khalilzad was in Doha to ‘help formulate a joint international response to the rapidly deteriorating situation in Afghanistan.’

He plans to ‘press the Taliban to stop their military offensive and to negotiate a political settlement, which is the only path to stability and development in Afghanistan.’ 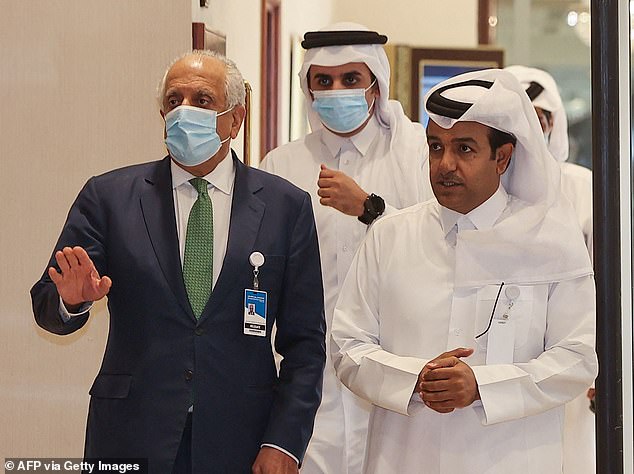 U.S. special envoy for Afghanistan Reconciliation Zalmay Khalilzad (left) arrived in Doha, Qatar, on Tuesday for talks designed to pressure the Taliban into recommitting to a peace process that has stalled as fighters advance across the country 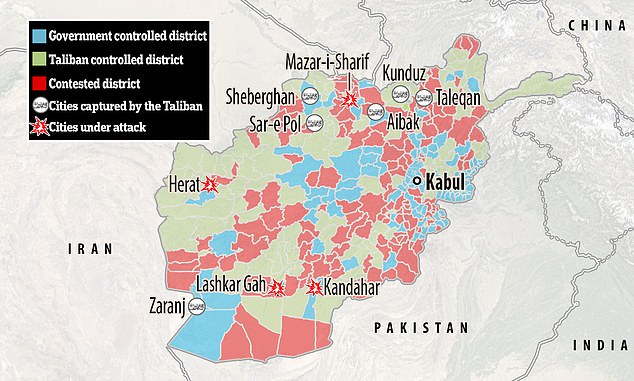 The map of Afghanistan has changed rapidly in the past week, as Taliban forces capture seven provincial cities and now control almost two thirds of the country 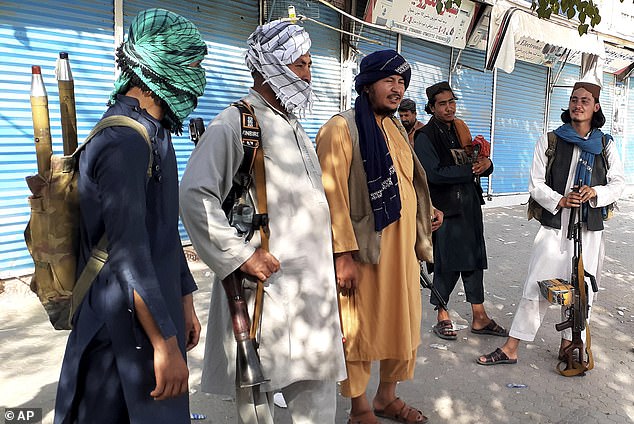 Taliban fighters stand guard in Kunduz city, Afghanistan, after insurgents seized the strategic city at the weekend as part of their rapid push across the war-torn country 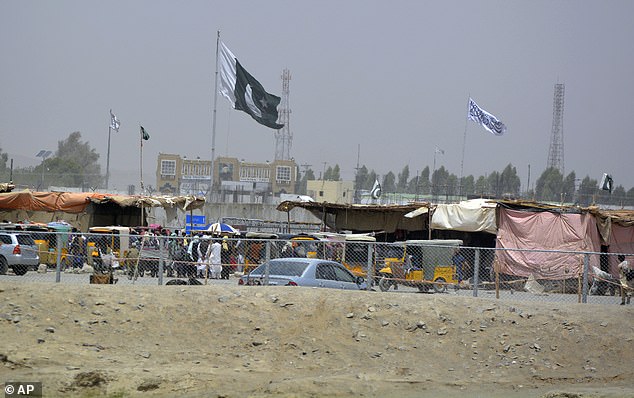 The Taliban flag flies at the Chaman border crossing, on the far side from the Pakistani flag.

On Friday, the White House added its voice to calls for the Taliban to halt their offensive when Press Secretary Jen Psaki urged them to ‘strongly consider’ the peace talks.

And the insurgents are moving in on one of the biggest prizes of all, Mazar-i-Sharif. Capturing the strategic northern city would all but end the Kabul government’s hold on the region.

The local strongman Atta Mohammad Noor promised to defend the city, saying there would be ‘resistance until the last drop of my blood.’

‘I prefer dying in dignity than dying in despair,’ he tweeted.

The UN human rights chief on Tuesday urged the Taliban to end their offensive and said her office was receiving reports of summary executions, targeting of government officials and attacks on homes, schools and clinics.

‘The Taliban must cease their military operations in cities. Unless all parties return to the negotiating table and reach a peaceful settlement, the already atrocious situation for so many Afghans will become much worse,’ Michelle Bachelet said in a statement. 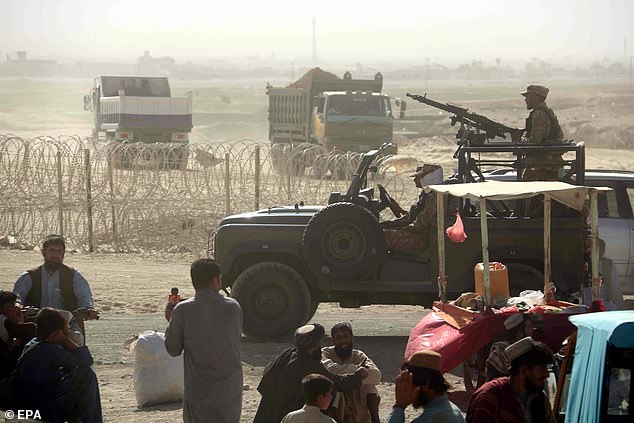 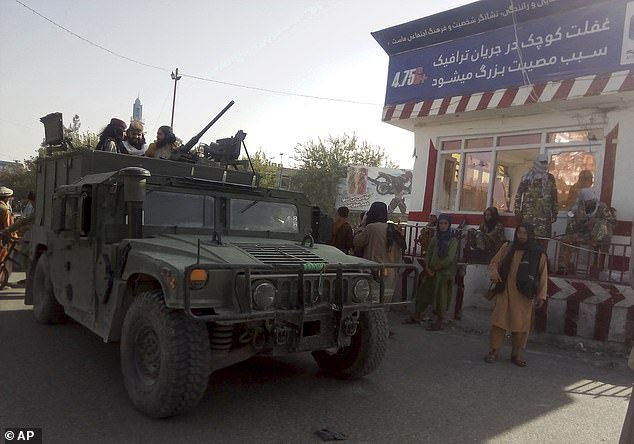 Taliban fighters man a checkpoint in Kunduz City on Monday. The militants have ramped up their push across much of Afghanistan, turning their guns on provincial capitals after taking district after district and large swaths of land in the mostly rural countryside.

U.S. warplanes have launched strikes in support of government troops in recent days but the Pentagon has yet to say whether they will continue to offer air support once Biden’s deadline has passed.

Instead, U.S. officials insist that Afghan forces are capable of standing alone after the Taliban.

‘That’s complete rubbish,’ Saad Mohseni, head of Afghanistan’s Moby Media Group, told the BBC a day later, ‘because the Afghan military was reliant on the US military for servicing, some maintenance, for planning, for training, and all of a sudden, they leave within weeks, and leaving the Afghan side on its own.

‘They can’t even service their aircraft so how could they take the fight to the Taliban, without the sort of assistance and the logistical assistance they require, which the American military basically had insisted over the last 20 years that they would fulfil.’

Kunduz was the first major city to fall to the Taliban at the weekend.

Desperate families, some with young children and pregnant women, abandoned their homes, hoping to reach the relative safety of Kabul, 200 miles to the south – a drive that would normally take around 10 hours.

Ghulam Rasool, an engineer, was trying to hire a bus to get his family to the capital as the sound of gunfire reverberated through the streets of his hometown. 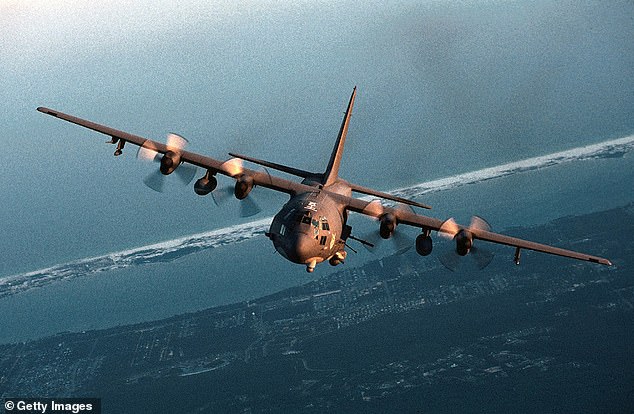 U.S. warplanes including AC-130 gunships like the one pictured have been in action supporting Afghan troops as they try to repel Taliban advances. The Pentagon is yet to say whether it will continue to provide air support after President Biden’s Aug. 31 deadline 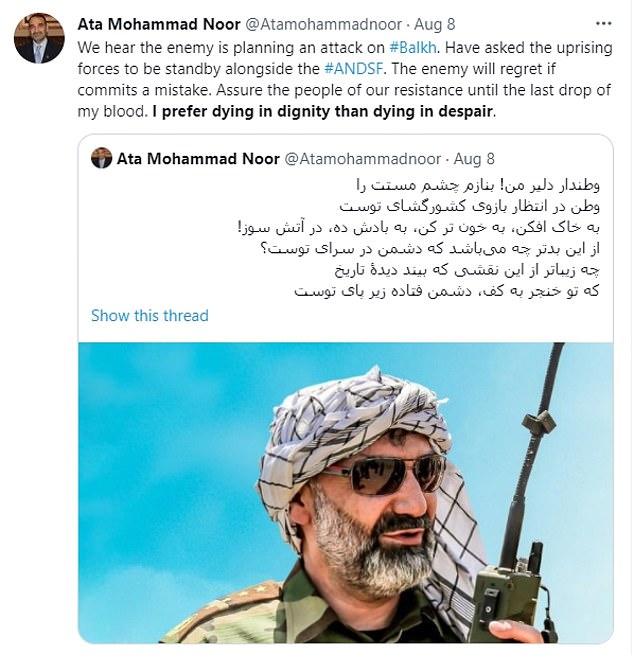 Atta Mohammad Noor, former governor of Balkh province, has promised to defend the key northern city of Mazār-e Sharīf ‘until the last drop’ of his blood

‘We may just be forced to walk till Kabul, but we are not sure if we could be killed on the way. … Ground clashes were not just stopping even for 10 minutes,’ Rasool told Reuters.

He and several other residents, and a security official, said Afghan commandoes had launched an operation to clear the insurgents from Kunduz.

Thousands were trying to enter Kabul, even after the city has witnessed attacks in diplomatic districts.