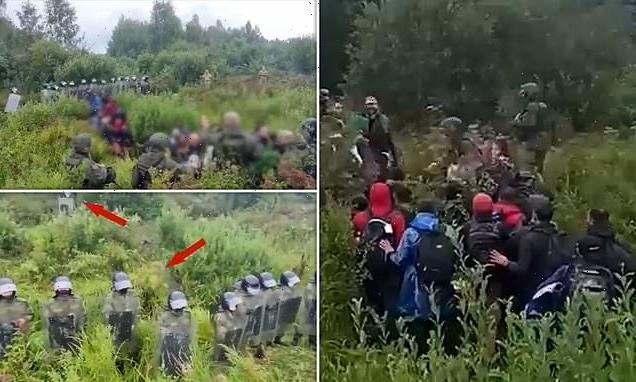 Belarus FORCES a stream of Afghan migrants into the EU: Putin-ally president Alexander Lukashenko is ‘attempting to create a humanitarian crisis in the EU’ as part of ‘blackmail’ plot

Poland is sending soldiers to its border with Belarus to stop a stream of Afghan and Iraqi migrants that are being forced across the border as part of a ‘blackmail’ plot by the country’s President.

It comes after Lithuania released video footage of body armor-clad Belarusian soldiers forcing a group of migrants across the border onto their territory.

Mateusz Morawiecki vowed Thursday that his country would stand firm and block migrants, mostly from Iraq and Afghanistan, who have been seeking to enter from neighboring Belarus.

Poland accuses the authoritarian government of Belarusian President Alexander Lukashenko of sending the migrants across its border, creating a humanitarian crisis.

“(The migrants) are people with whom I sincerely sympathize, but they are an instrument, a tool in the hands of Mr. Lukashenko,” Polish Prime Minister Mateusz Morawiecki, told a news conference.

He vowed that Poland would not succumb to “this type of blackmail.”

Hundreds of soldiers have been deployed to the border and at least 60 miles of barbed wire have been laid as Poland seeks to prevent the migrants from entering.

Several dozen people, mainly from Iraq and Afghanistan, have been wandering for several days in the border zone, near the town of Usnarz Gorny. Polish authorities do not want to let them in while Belarus doesn’t want to let them back.

Fundacja Ocalenie (Salvation Foundation), a humanitarian group that sent activists to the border, said there were 32 people from Afghanistan there, among them women and sick people.

The foundation posted a photo of migrants being surrounded by Polish border guards and soldiers. One showed what they said was people from Afghanistan who had carried a cat with them.

Meanwhile, Poland has sent 100 soldiers to Afghanistan to evacuate Poles and Afghans who worked with the Polish mission, vowing to show solidarity to them

The European Union has condemned what it called Belarus’ ‘aggressive behaviour’ in organising the illegal border crossings with migrants into Latvia, Lithuania and Poland with the aim of destabilising the 27-nation bloc.

So far this year, more than 4,100 asylum-seekers, most of them from Iraq, have illegally crossed from Belarus into Lithuania.

That’s 50 times more than during all of 2020 and they’re being sheltered in temporary camps across the Baltic EU member.

It comes after the Lithuanian border force released video footage in which it claims Belarusian police officers in riot gear illegally pushed migrants over their border. 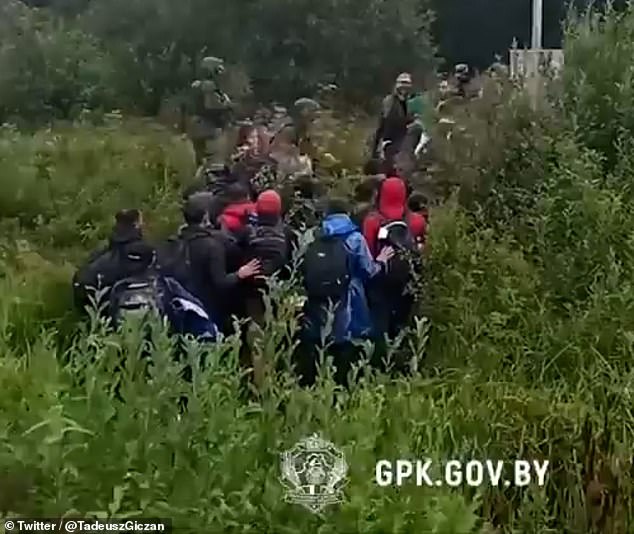 The European Union has condemned what it called Belarus’ ‘aggressive behaviour’ in organising illegal border crossings with migrants into Latvia, Lithuania and Poland with the aim of destabilising the 27-nation bloc. Pictured: Lithuanian border force released footage in which they claim Belarus police in riot gear illegally pushed migrants over their border

Poland said Wednesday it had deployed nearly 1,000 troops to its border with Belarus to help border guards cope with a surge of migrants – again mostly from Iraq – who were trying to enter the country.

‘This aggressive behaviour is unacceptable and amounts to a direct attack aimed at destabilising and pressurising the EU,’ said a statement by Slovenia, which holds the bloc’s rotating presidency until the end of the year, after emergency talks among the bloc’s interior ministers.

‘The European Union will need to further consider its response to these situations in order to increase its effectiveness and to deter any future attempts to instrumentalise illegal migration in this manner,’ the statement said.

The migrant movements spiked dramatically after the EU slapped sanctions on Belarus officials. 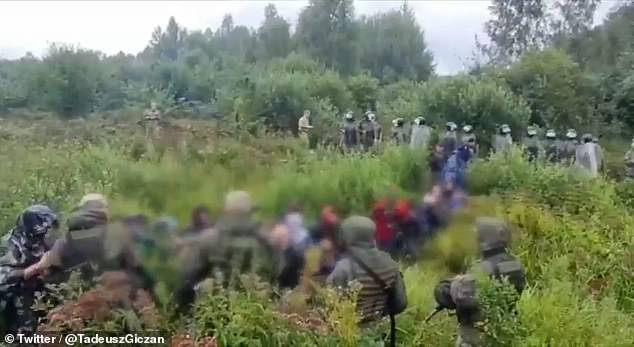 In the footage, a line of migrants could be seen being directed by a large group of police personnel 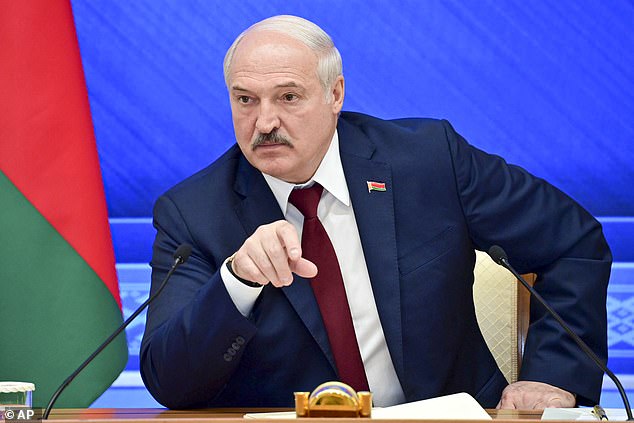 The migrant movements spiked dramatically after the EU slapped sanctions on Belarus officials. The measures were imposed after President Alexander Lukashenko (pictured) ordered a crackdown on opponents and protesters after claiming victory in a vote last year that the West denounced as rigged

The measures were imposed after President Alexander Lukashenko ordered a crackdown on opponents and protesters after claiming victory in a vote last year that the West denounced as rigged. His main election challenger fled to Lithuania.

Slovenia said EU nations are ‘determined to take all necessary measures to effectively protect all the EU external borders, by counteracting Belarus’ aggression.’

The issue has become more acute in the light of the Taliban takeover of Afghanistan that was completed on Sunday, with many Afghans trying to flee the country, fearing reprisals.

EU member states are nervous about a replay of Europe’s 2015/16 migration crisis when the chaotic arrival of more than a million people from the Middle East stretched security and welfare systems and fuelled support for far-right groups. 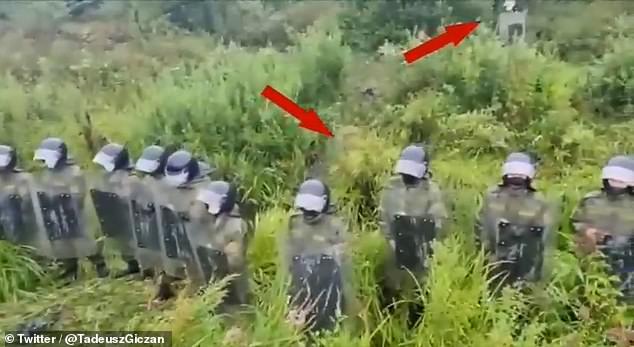 A long row of police officers, donning riot gear and holding shields could be seen in formation in the footage

The ministers, without direct reference to Afghanistan, said there was ‘a need to strengthen the entire external border’ of the EU to prevent illegal crossings in the future.

No details about how that might happen were provided.

Many of the migrants were believed to have arrived in Belarus by plane on commercial flights from Iraq. Those flights have stopped for now, perhaps in part due to the EU’s threat to impose visa restrictions on Iraqi citizens and officials.

Still, Lithuania’s border guard released video footage on Wednesday which it said reveals that migrants are being pushed across the border into EU territory by Belarus riot police.

Another video showed several people cross into Lithuania and immediately return to Belarus to be filmed by Belarus officials. 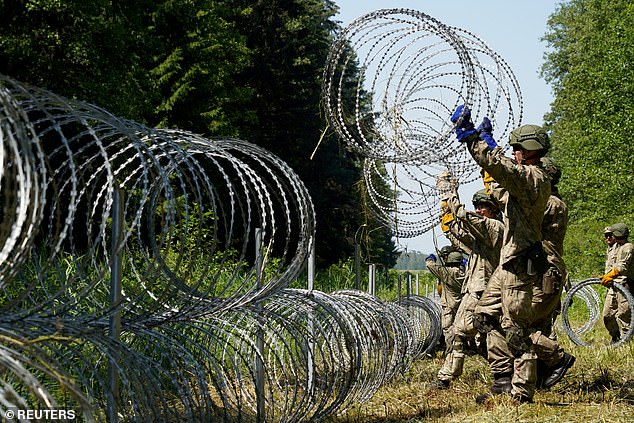 ‘I have seen these outrageous actions when officials push people across the border. It is both an issue of human rights, and also a question of protecting the border of the EU,’ Sassoli said. ‘It is an organized activity of the Lukashenko regime.’

On Tuesday, German Chancellor Angela Merkel and Estonian Prime Minister Kaja Kallas accused Lukashenko of launching a ‘hybrid attack’ against the bloc by channelling migrants to Lithuania, Latvia, Estonia and Poland in retaliation for the EU’s sanctions.

Kallas said ‘this is no refugee crisis, but this is a hybrid attack on the European Union.’

Merkel said she would raise the issue with Russian President Vladimir Putin in Moscow on Friday.

Belarus depends heavily on Russian energy supplies and Moscow has authorized loans to prop up the country’s beleaguered economy.