Two-tonne cannon ‘fired’ from Royal Navy ship during the Battle of Trafalgar to go under the hammer for £12,000

A giant cannon that is believed to have been fired at the Battle of Trafalgar is tipped to sell for £12,000.

The two tonne weapon has been kept in the garden of a detached house by its history-buff owner for the past decade.

The vendor acquired it from the Portsmouth Naval Dockyard which is home to Admiral Nelson’s flagship HMS Victory. 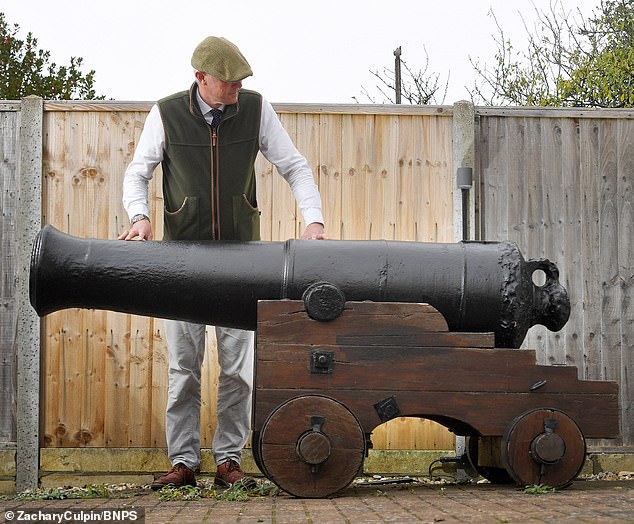 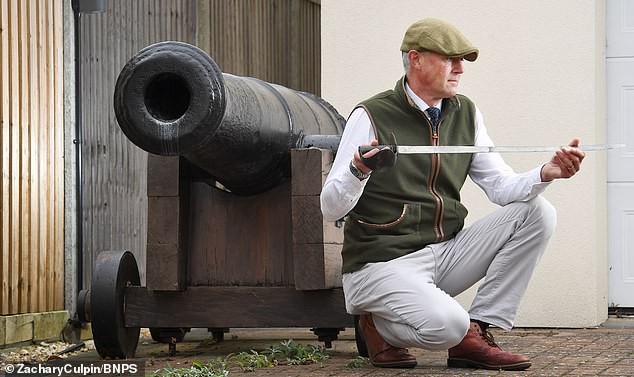 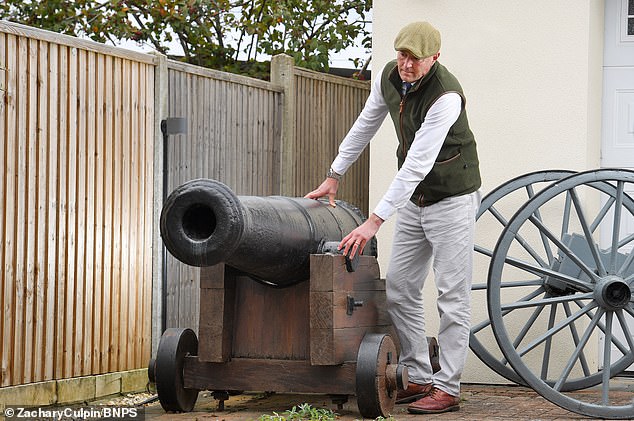 The 18 pounder Bloomfield cannon will go under the hammer at Antony Cribb Ltd, Newbury next month

The 8ft long, 18 pounder Bloomfield cannon is engraved with the date ‘1805’, the year of the momentous naval battle against the French and Spanish fleet.

It is going under the hammer with auctioneers Antony Cribb Ltd, of Newbury, Berkshire.

Auctioneer Antony Cribb said he was blown away by the size of the cannon when he inspected it during a house visit.

He said it is so heavy the buyer would require a lorry and crane to transport it to their premises.

Mr Cribb said: ‘The cannon is dated 1805 which is the year of Trafalgar so it is possible it was used there, although we can’t be certain of this.

‘When I first saw it I was struck by its sheer size. It is massive and to transport it you would need a lorry and crane.

‘The Battle of Trafalgar is one of the most iconic naval battles in history and it could sell for significantly more than its £12,000 estimate.’ 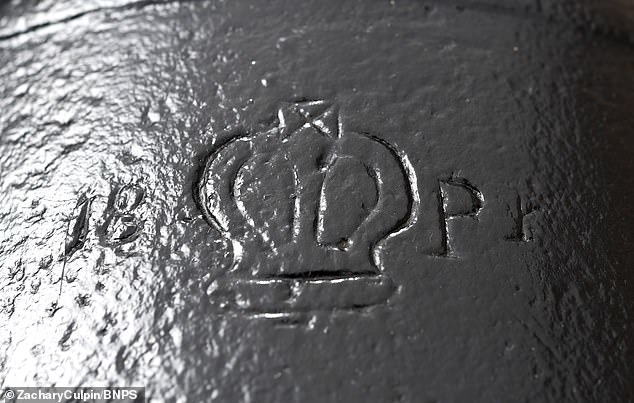 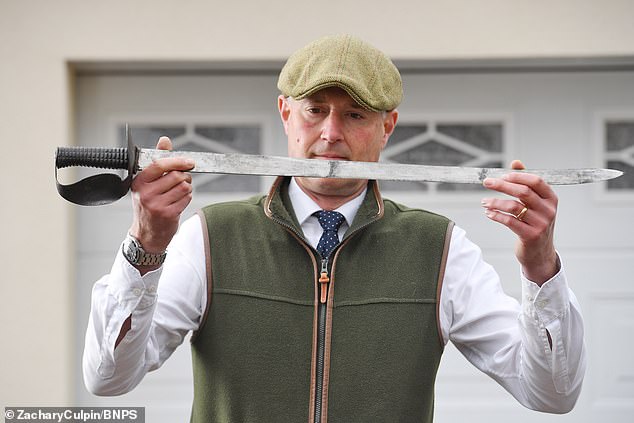 The cutlass, pictured, was used by the Royal Navy when boarding  other ships during the Battle of Trafalgar

Nelson was shot and killed on board HMS Victory by a French sniper during the Battle of Trafalgar on October 21, 1805.

He was carried down to the Orlop deck by his men and held on for long enough to hear that his men had triumphed.

His body was pickled in a cast of brandy and returned to England where he was given a state funeral.

The sale takes place on November 10. 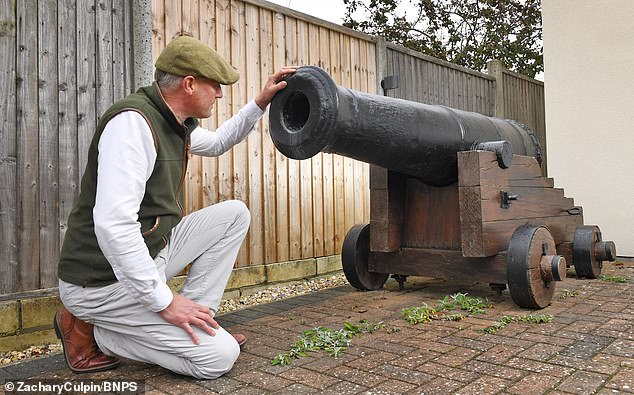 Mr Cribb, pictured, believes the cannon could sell for far more than its £12,000 estimate 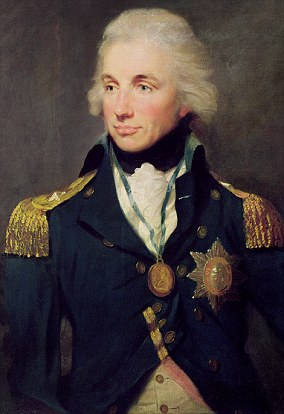 Fought on October 21, 1805, the Battle of Trafalgar is one of history’s most epic sea clashes.

Not only did it see Britain eliminate the most serious threat to security in 200 years, but it also saw the death of British naval hero Admiral Lord Nelson.

This was not before his high-risk, but acutely brave strategy won arguably the most decisive victory in the Napoleonic wars. Nelson’s triumph gave Britain control of the seas and laid the foundation for Britain’s global power for more than a century.

Despite signing a peace treaty in 1803, the two nations were at war and fought each other in seas around the world.

After Spain allied with France in 1804, the newly-crowned French emperor Napoleon Bonaparte had enough ships to challenge Britain.

In October 1805, French Admiral Pierre-Charles Villeneuve led a Combined French and Spanish fleet of 33 ships from the Spanish port of Cadiz to face Nelson and Vice Admiral Cuthbert Collingwood. 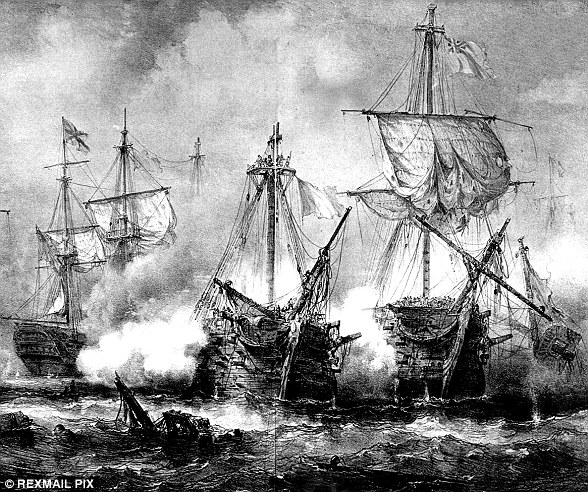 Fought on October 21, 1805, the Battle of Trafalgar is one of history’s most epic sea clashes. Not only did it see Britain eliminate the most serious threat to security in 200 years, but it also saw the death of British naval hero Admiral Lord Nelson

Battles at sea had until then been mainly inconclusive, as to fire upon the opposing ship, each vessel had to pull up along side one another (broadside) which often resulted in equal damage.

Nelson bucked this trend by attacking the Combined Fleet line head on – and sailed perpendicular towards the fleet, exposing the British to heavy fire.

He attacked in two columns to split the Combined Fleet’s line to target the flagship of Admiral Villneuve.

11. 30am Lord Nelson famously declared that ‘England expects that every man will do his duty’, in reference to the command that the ships were instructed to think for themselves. The captains had been briefed on the battle plan three weeks before, and were trusted to bravely act on their own initiative and adapt to changing circumstances – unlike their opponents who stuck to their command.

Vice Admiral Cuthbert Collingwood led the first column and attacked the rear of the line, and broke through.

Nelson sailed directly for the head of the Combined Fleet to dissuade them from doubling back to defend the rear. But before he reached them, he changed course to attack the middle of the line – and Villeneuve’s flagship.

Speeding toward the centre of the line, HMS Victory found no space to break through as Villeneuve’s flagship was being tightly followed – forcing Nelson to ram through at close quarters.

In the heat of battle, and surrounded on three sides, Nelson was fatally shot in the chest by a well-drilled French musketeer.

The Combined Fleet’s vanguard finally began to come to the aid of Admiral Villeneuve, but British ships launch a counter-attack.

Admiral Villeneuve struck his colours along with many other ships in the Combined Fleet and surrendered.

4.30pm With the knowledge he has secured victory, but before the battle had officially concluded, Lord Nelson died.

5.30pm French ship Achille blew up signalling the end of the battle – in all 17 Combined Fleet ships surrendered.

… so did Nelson really say ‘Kiss me, Hardy’ with his dying words?

It was Britain’s greatest naval victory and for more than 200 years historians have analysed every detail.

Now, amazingly, a new eye-witness account of the Battle of Trafalgar has emerged during a house clear-out.

It gives not only a first-hand view of proceedings from the lower decks but also a different interpretation of one of history’s most enduring arguments – Admiral Lord Nelson’s dying words.

Robert Hilton was a 21-year-old surgeon’s mate on HMS Swiftsure, a 74-gun ship that played its part in the destruction of the French and Spanish fleets and of Napoleon’s dream of invading England.

It was 13 days later, after Swiftsure had made it through gales to Gibraltar for repairs that Hilton took up his pen and wrote a nine-page letter home on November 3, 1805.

In it he says Nelson’s last words, relayed to his ship’s company from Nelson’s flag captain, Captain Hardy, were: ‘I have then lived long enough.’

But historians rely on his surgeon’s reports that he said: ‘Thank God I have done my duty.’