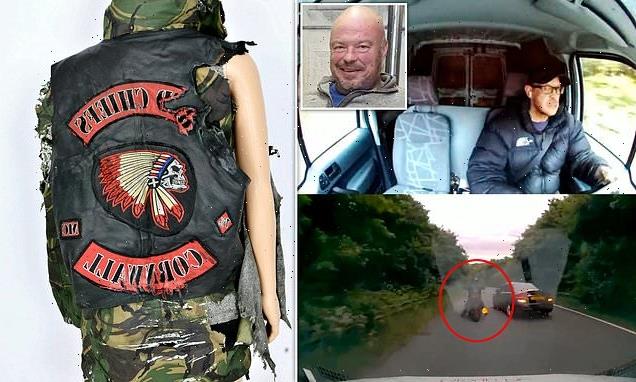 Shocking footage shows the moment three men killed a biker by driving a van into him for wearing his ‘colours’ on a rival motorcycle gang’s turf, as the trio are jailed for a total of 20 years for manslaughter.

In dashcam footage, David Crawford, 59, is seen being knocked off his bike before being dragged hundreds of metres under the van and left for dead by the side of the A38 near Plymouth, Devon.

He was ‘deliberately targeted’ on the night of May 12 last year by a rival Bandidos gang who were blood-thirsty for revenge, prosecutors argued at trial.

Benjamin Parry, 42, Chad Brading, 36, and Thomas Pawley, 32, were all cleared of murder but convicted of manslaughter. Parry was jailed for 12 years on Friday, while Brading and Pawley were each sentenced to four years. 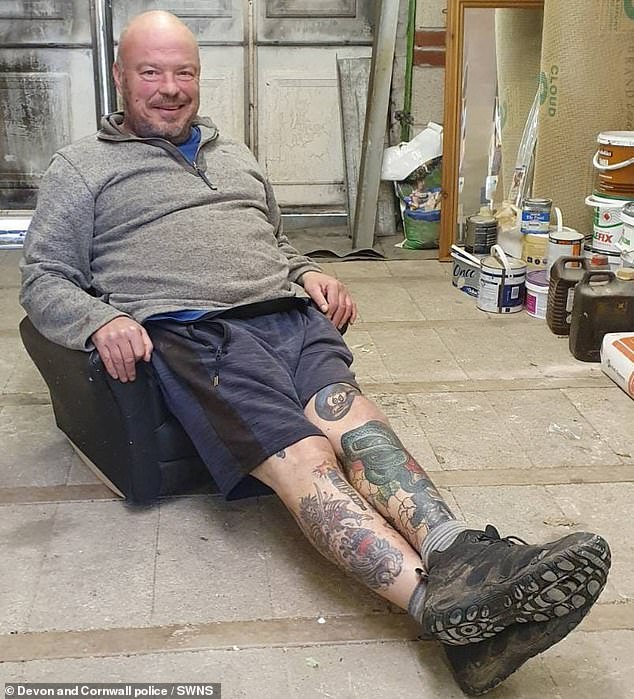 In dashcam footage, David Crawford (pictured), 59, is seen being knocked off his bike before being dragged hundreds of metres under the van and left for dead by the side of the A38 near Plymouth, Devon 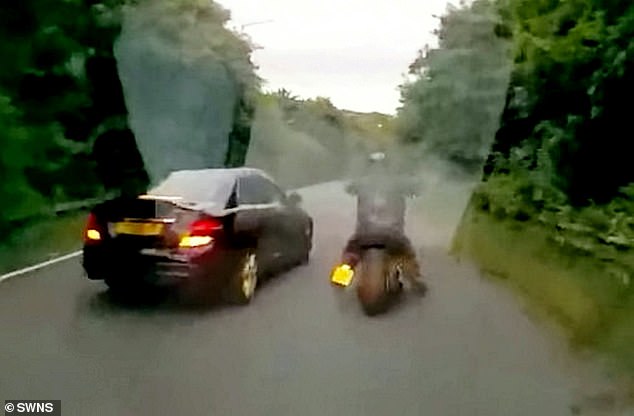 Parry, sentenced to longer in prison because of his ‘significant, if not leading, role’ in the joint enterprise, was also banned from driving for 10 years.

The trial at Plymouth Crown Court had heard it was considered ‘insulting’ for a member of one club to ride in a rival club’s patch wearing ‘colours’ – the badges and emblems of that club.

Prosecutors argued the three defendants, who were part of the Plymouth branch of the Bandidos Motorcycle Club, had acted as a ‘joint enterprise’ in carrying out the fatal attack.

Jailing them, he said: ‘In my judgement, you, Parry, bear by far the bulk of the responsibility for the death of Mr Crawford.

‘Your unlawful act of driving into Mr Crawford was an intentional act to cause injury. 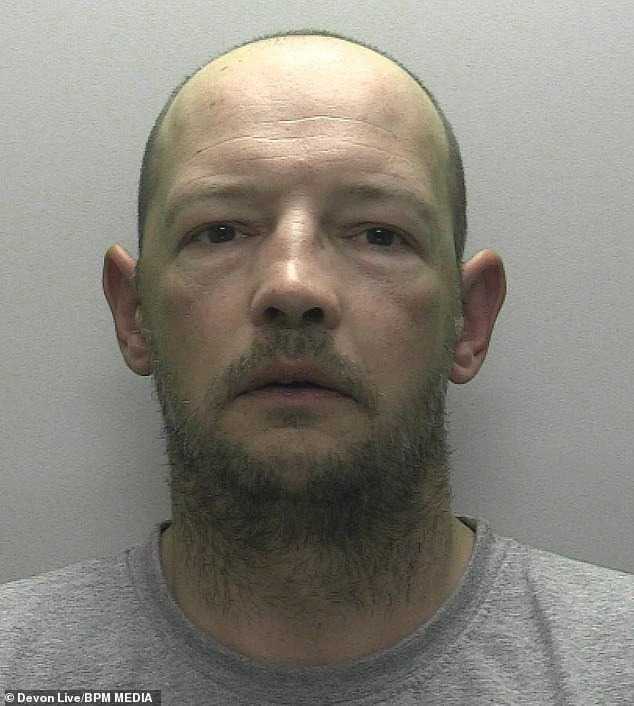 Benjamin Parry (pictured), 42, was sentenced to 12 years for manslaughter for his ‘significant’ role in the killing 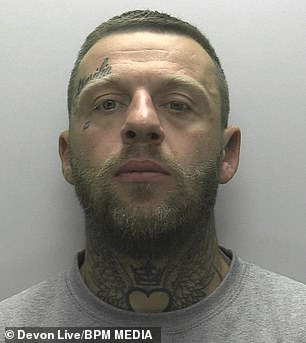 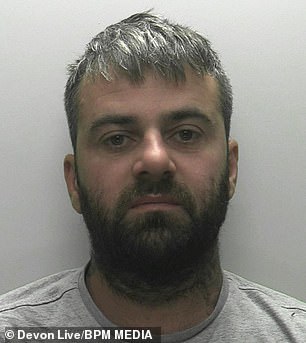 Chad Brading (left), 36, and Thomas Pawley (right), 32, were each sentenced to four years for the manslaughter of David Crawford 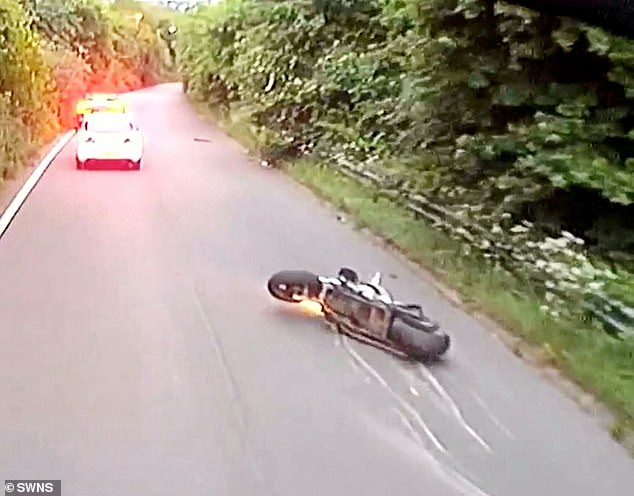 David Crawford’s Kawasaki motorcycle on a slip-road of the A38 near Plymouth, Devon, after being hit

‘You played a significant, if not leading, role in this joint enterprise. You, along with Pawley and Banding, planned there should be an attack on Mr Crawford.

‘Very significant mental and physical torture was caused to the deceased as he was dragged along the road for almost a kilometre under your van.

‘After the collision, you drove off with Mr Crawford trapped under your van.

‘After you came to accept that’s what happened, you continued to drive, leaving Mr Crawford dead or dying in the road.’

The trial at Plymouth Crown Court had been told the trio had set out to confront their rivals from the beginning and caught up with the Red Chiefs MC, that was affiliated to the Hells Angels, at the Tamar Bridge.

Mr Crawford, of Ivybidge, Devon, was seen saying farewell to his fellow members on the evening of May 12 last year.

In what was described as a ‘coordinated attack’, dashcam footage that was played to the jury showed Parry’s Transit slamming into the back of the victim’s Kawasaki motorcycle on a slip-road of the A38 near Plymouth.

The footage also showed the black Mercedes with the other two defendants inside, beside it.

The victim was initially knocked onto the bonnet and then under the van – where he was dragged before being dislodged at a slip road further down the A38.

The victim was pronounced dead at the scene and had suffered a ‘horrific’ number of injuries consistent with being dragged along a road.

Passing paramedic Eleanor Nematollahy was single crewed and on her way back from Launceston at around 8.50pm having attended an incident of cardiac arrest when she spotted the body of Mr Crawford. 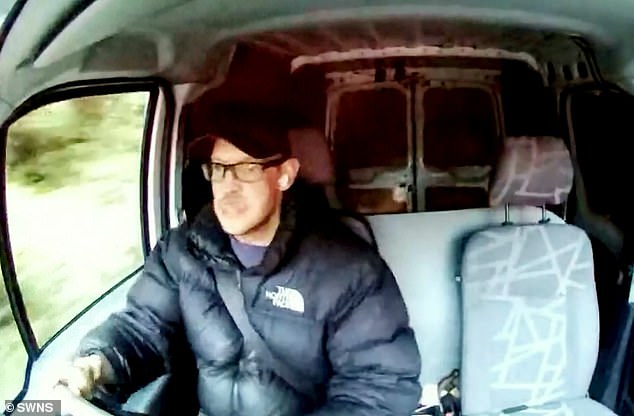 Benjamin Parry slamming into the back of David Crawford’s Kawasaki motorcycle on a slip-road of the A38 near Plymouth, Devon 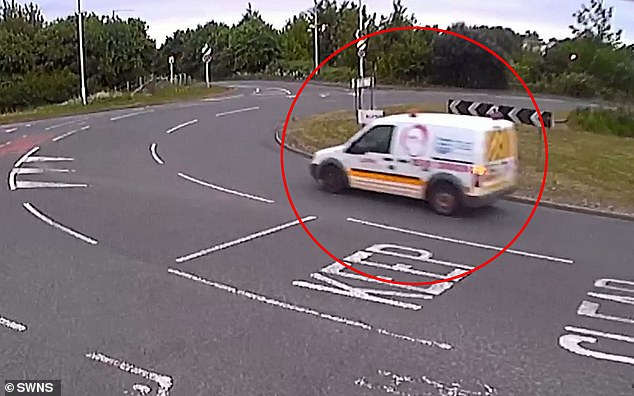 Benjamin Parry’s van seconds before it slammed into the back of David Crawford’s Kawasaki motorcycle on a slip-road of the A38 near Plymouth, Devon 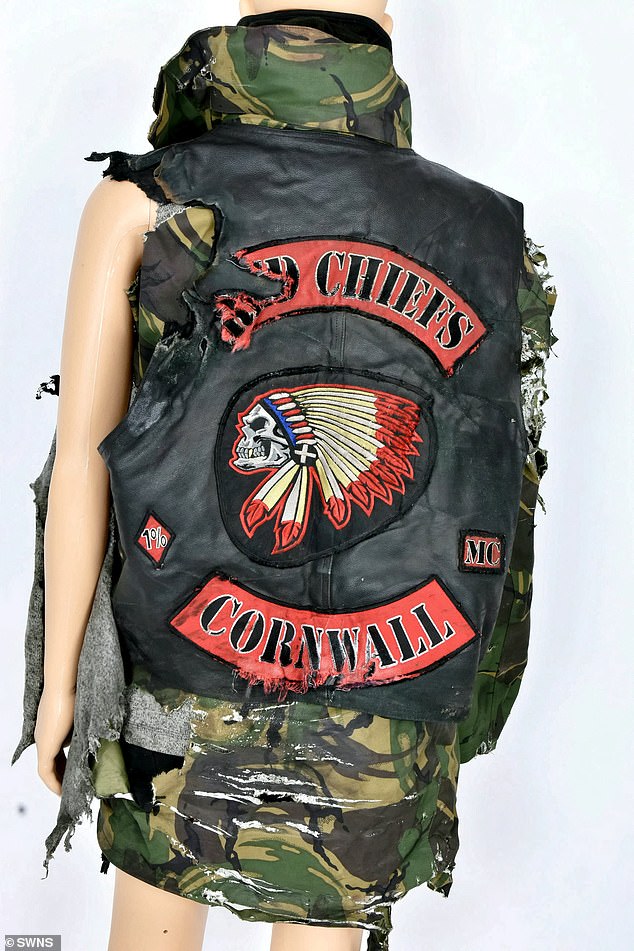 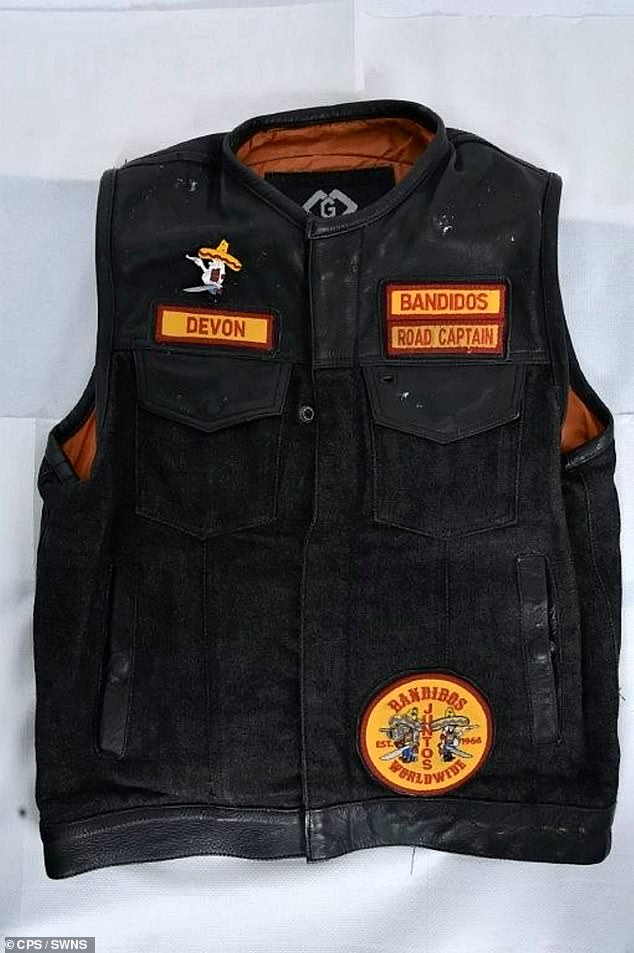 The clothing of the Bandidos gang, whose three members targeted and killed David Crawford on May 12 last year

She noted that almost all his injuries were to his left side and that his helmet ‘was worn right down to almost nothing’.

The pericardial sac which surrounded Mr Crawford’s heart had been torn open and he suffered lacerations across the right atrial of the heart. He also suffered tears to his liver and spleen as well as three fractures to his pelvis.

The pathologist noted that Mr Crawford’s black motorbike helmet was ‘eroded flat’ on the left side. In addition she found abrasions and lacerations of varying severity to his head, neck, both arms, torso and both legs.

The prosecution said the three defendants had together through a series of calls and ‘signals’ sought to hunt down the victim and said none of them had the ‘decency to stop or call an ambulance.’

The judge told all three defendants: ‘Mr Crawford was entirely innocent in all this. He’d just been out for a ride on his motorbike with his friends from his motorcycle clubs. 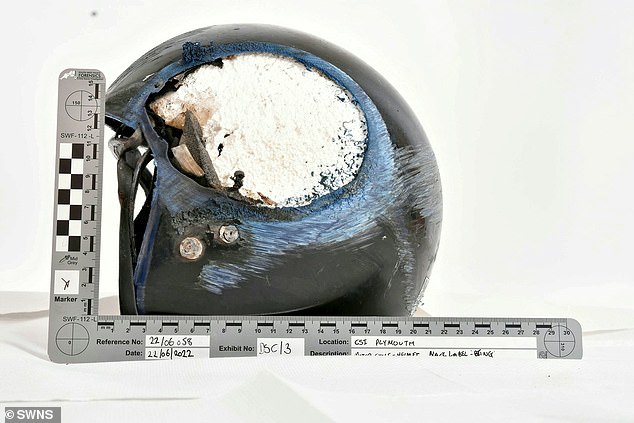 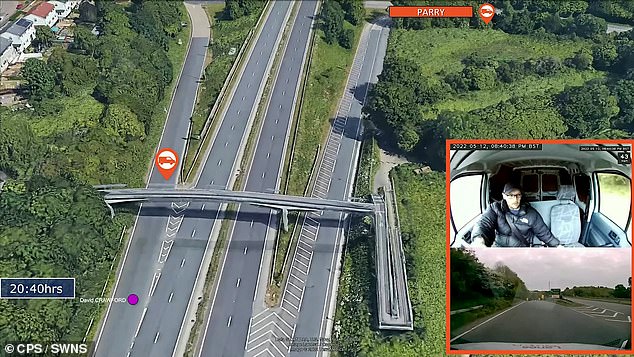 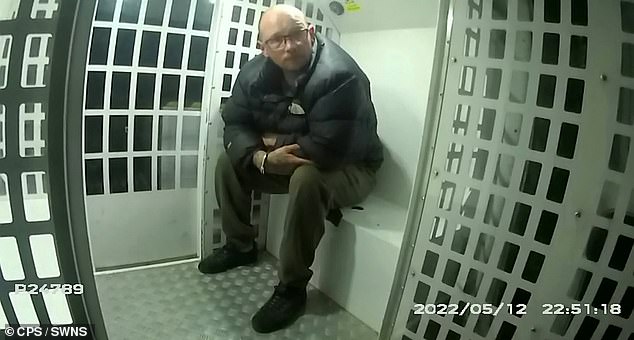 The moment Parry was arrested on suspicion of murder. He was later cleared but convicted for manslaughter

‘You three had absolutely no right in determining who could ride in Devon and what colour they could wear.

‘His family have been absolutely devastated by his death.’

In a victim impact statement read to the court today, his wife Ann-Marie said: ‘David was the life and soul of the party, he was passionate about rugby which he played since school.

‘He was loved by his family and his close friends. He had a motorbike for most of his life.

‘When the police told me and our daughter he’d been killed, our lives changed in a second.

‘I don’t leave my mum’s house unless I have to or I’m with someone.

‘I’ve stopped going to my gym as it’s in Ivybridge and it gives me panic attacks.

‘I have lived in Plymouth all my life and this is the first time I don’t like living in this city. When I can afford to, I’m going to move to another country.’

Mr Crawford’s daughter Sarah said he was on his way to arrange flights to Australia to visit her when he was killed. 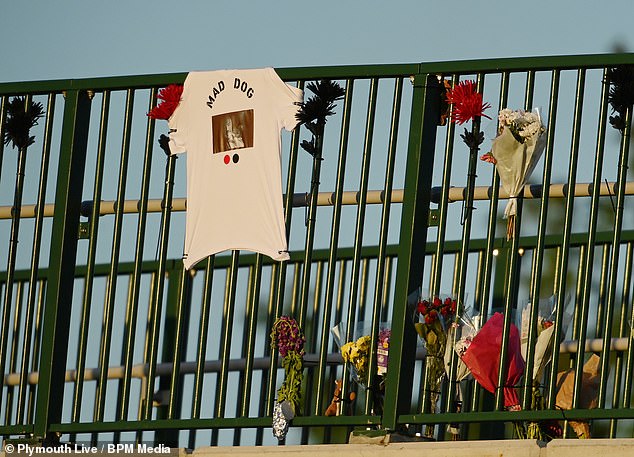 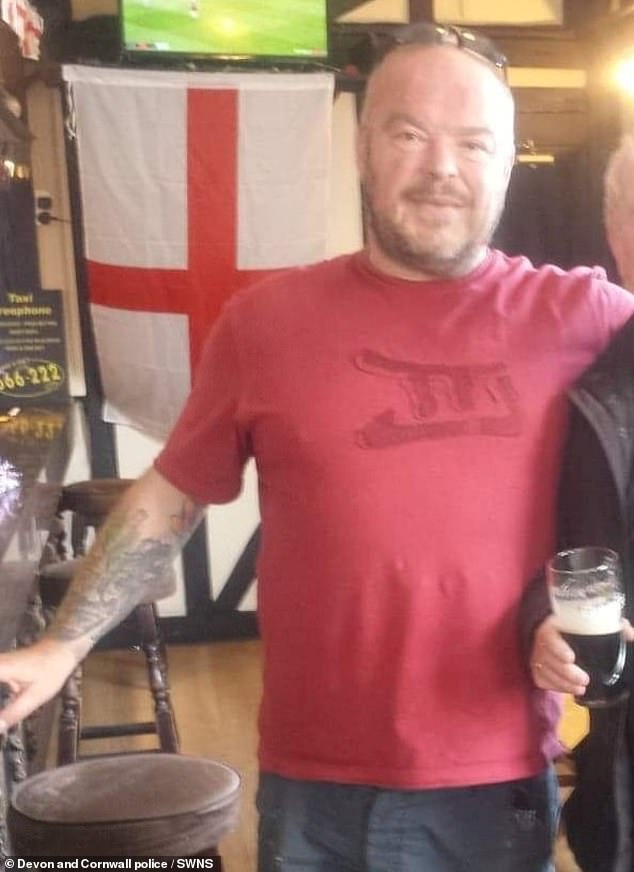 Mr Crawford’s daughter Sarah said he was on his way to arrange flights to Australia to visit her when he was killed (Pictured: David Crawford)

In a statement read to the court, she said: ‘When I received the news that my dad had died, the pain was immediate. My heart felt like it had ripped out of my chest.

‘This has been a huge shock and an emotionally and financially difficult time.

‘The day he died, he was found with his passport in his pocket as he was arranging his flights and visas to Brisbane to see me.

‘My dad won’t walk me down the aisle and won’t be there for future family events. I’m just devastated.’

Mr Crawford’s step-daughter Janice told the court he became her dad when she was four years old and he married her mum.

She added: ‘Our bond was strong and unique. I will never have another person in my life like my dad.

‘The pain and hurt these man have caused me will affect me for my whole life. My anxiety is so bad I don’t like to leave my house.’

The jury was told the Devon-based Bandidos Motorcycle Club had an issue with the Cornish-based rivals Red Chiefs riding in their county with their colours.

They were shown footage of Crawford riding his black Kawasaki motorbike when it was stopped by Pawley and Brading in Pawley’s black Mercedes car on a sliproad of the A38. 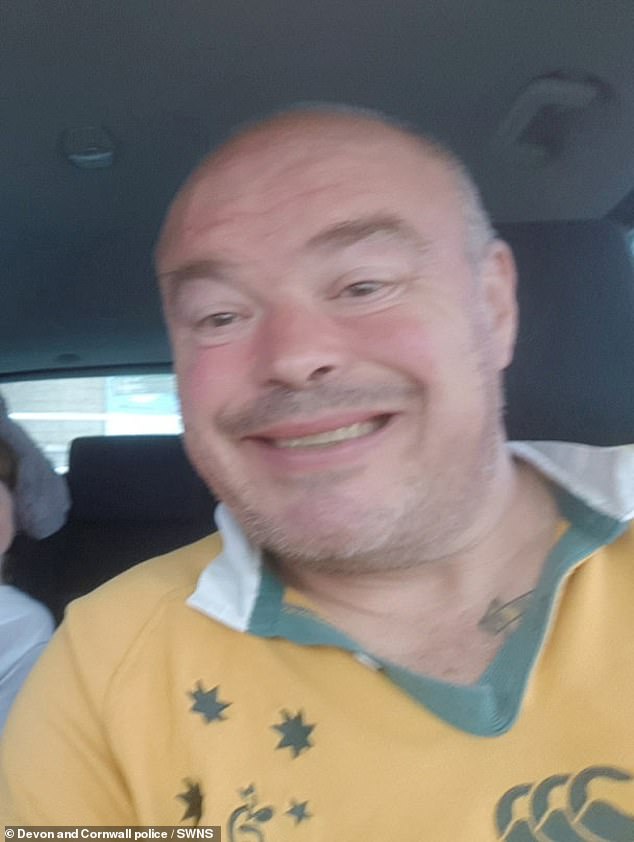 Sean Brunton KC, defending Parry, said his client hit Mr Crawford (pictured) but claimed it was ‘nothing other than a spur of the moment act’ and a ‘catastrophic error of judgement by him’

As the bike was being obstructed, Parry, who was driving his work Transit van, drove behind Mr Crawford and struck the rear of the motorbike.

Parry didn’t stop after the collision and Crawford was pinned under the Transit as it drove on at speed onto the A38; his body eventually broke free at the off slip of another junction hundreds of meters away from the initial collision.

Paramedics were unable to save Crawford who died at the scene.

In a police interview, Brading claimed ‘nobody set out to kill anybody.’

He added: ‘It was just never meant to happen’.

Sean Brunton KC, defending Parry, said his client hit Mr Crawford but claimed it was ‘nothing other than a spur of the moment act’ and a ‘catastrophic error of judgement by him’.

His earlier manslaughter plea had initially been rejected by the prosecution, who pursued the more serious murder charge.

Representatives of Pawley and Brading also told the court murder was ‘not in the mind’ of their clients at the time and they did not conspire with Parry on the attack.

Speaking after the sentencing, Detective Inspector Rob Smith said: ‘These men have taken away a father, grandfather, brother, and son away from his family in what was a senseless and unwarranted attack.

‘I would like to pay tribute to David’s family who, throughout have conducted themselves in an extremely dignified manner and been hugely supportive of our investigation team, which I am very grateful for.

‘I hope these sentences will provide at least some comfort that justice has been done and allow David’s family to move from this terrible incident.’