British Airways plane comes within 100ft of hitting a Chinese lantern which was flying 20,000ft above Cambridgeshire

A British Airways plane flying at 400mph came within a split second of hitting a Chinese lantern nearly four miles up in the sky, a report has revealed.

Flight records reveal that the close call involved a turbo-prop Saab 2000 aircraft carrying up to 50 passengers from the Isle of Man to London’s City airport.

The shocked crew saw the lantern less than 100ft away as they roared past it at a height of 20,000ft near Duxford, Cambridgeshire. 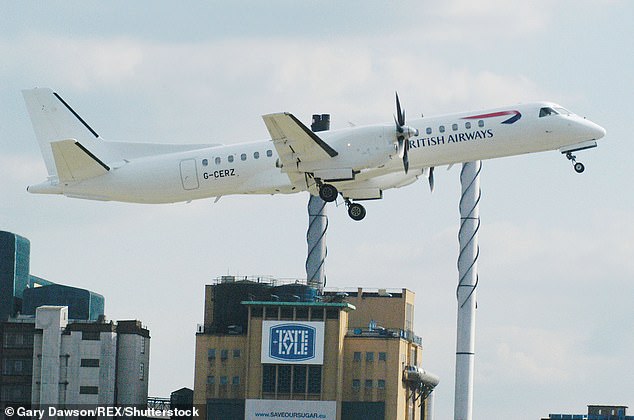 The crew of the British Airways Saab 2000 Turbo prop, similar to this one, spotted the Chinese lantern at around 20,000 feet near Duxford, Cambridgeshire. The lantern passed within 100 feet of the twin prop aircraft which was travelling at around 400mph at the time 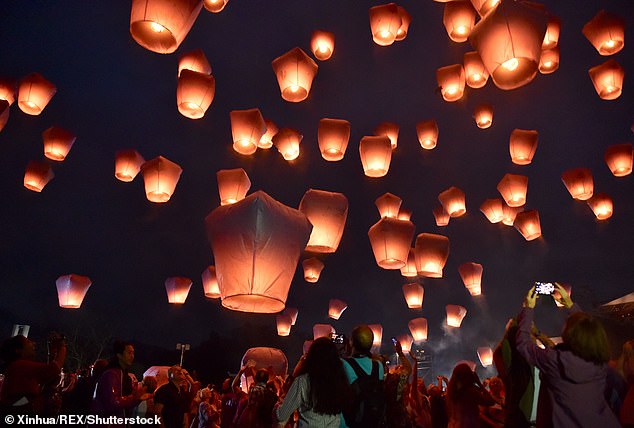 Officials have warned that the lanterns, pictured, represent a danger to aircraft, wildlife and can even be responsible for causing fires when they fall back to earth

It passed down the left side of the twin-engine aircraft and slightly above it, prompting the pilot to alert air traffic controllers.

The close call at 5.30pm on July 30 has been revealed in a report by the UK Airprox Board which investigates near misses.

Chinese lanterns are traditionally made of paper around a bamboo or wire frame, supporting a candle providing hot air to make them float upwards.

But it is believed that the one in the incident may have been blown far into the sky by air currents.

The report rated it as the highest possible Category A incident where there was a serious risk of collision.

It added: ‘The Board considered that the pilot’s overall account of the incident portrayed a situation where providence had played a major part in the incident and/or a definite risk of collision had existed.’

A British Airways spokesperson said: ‘The safety of our customers and crew is always our priority.

‘We take such matters extremely seriously and encourage our pilots to report sightings so that the authorities can investigate and take the appropriate action.’

Chinese lanterns have become increasingly popular in recent years, despite concerns that they are a fire risk and a threat to wildlife and livestock.

Many are released at night at parties and celebrations so they can be seen glowing in the dark as they float away.

A lantern was blamed for starting a giant blaze in 100,000 tonnes of plastic recycling material which caused £6 million of damage at Smethwick in the West Midlands in June 2013.

Five months later another sparked a blaze which damaged 50 caravans near Tewkesbury, Gloucestershire.

Farmers have also claimed that their cattle have died agonising deaths after swallowing pieces of wire from lanterns which land in fields.

In another case, a foal had to be put to sleep after its legs were badly injured when it was terrified by a lantern and it bolted through a fence.

The RSPCA has claimed that birds and other wildlife can be injured or killed by getting entangled in the wire or bamboo frames.

The charity is calling for the use of lanterns to be banned from all council owned land in England, following a similar ban on council land in Wales.

Some retailers such as Poundland and Tesco no longer sell them due to the concerns about them, but more than 200,000 are still bought every year in the UK.

The Chief Fire Officers Association to call on the public to ‘refrain’ from using them.