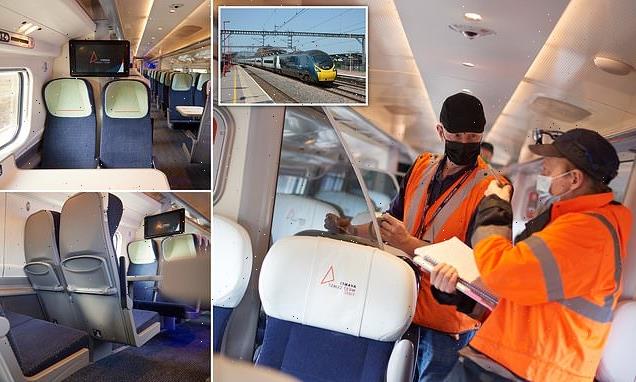 A major rail operator has unveiled the first in a series of its modernised trains as it embarks on a £117million project to complete the biggest ever fleet refurbishment in UK railway history.

Avanti West Coast said its entire fleet of 56 tilting Pendolinos is being refurbished so they ‘look and feel like new trains’ with more comfortable seats, a redesigned shop and better on-board information.

The first refurbished Pendolino train returned to service with the 5.05am departure from Manchester Piccadilly to London Euston today. The second train to be overhauled will return to service within the next few weeks.

And a fascinating behind-the-scenes timelapse video has revealed the process behind how workers put all the new seats into an upgraded carriage – by wheeling them on board in pairs and then locking them into place.

Other changes to trains by the operator – which also runs services to the likes of Birmingham, Liverpool, Blackpool, Carlisle, Glasgow and North Wales – include upgraded lighting, refurbished toilets and new carpets.

All 35 Pendolinos – also known as ‘Pendos’ – with 11 carriages will see one first class carriage converted to standard class, a change which the operator said will add more than 2,000 extra standard class seats to services.

The electric Pendolinos were introduced on the West Coast Main Line by then-operator Virgin Trains two decades ago in July 2002, and they have since clocked up more than 272million miles. The tilting mechanism means they can tilt by up to eight degrees to make them travel faster around curves and more comfortable.

Avanti hopes that the refurbishment programme of all 56 trains will be completed by 2024, and this upgrade is expected to keep the 125mph Pendolino trains running until High Speed 2 begins operating in the next decade.

The first phase of HS2 from London to Birmingham and Crewe is currently estimated to start between 2029 and 2033, while the second phase to take the line on to Manchester will not start running until 2035 to 2040. 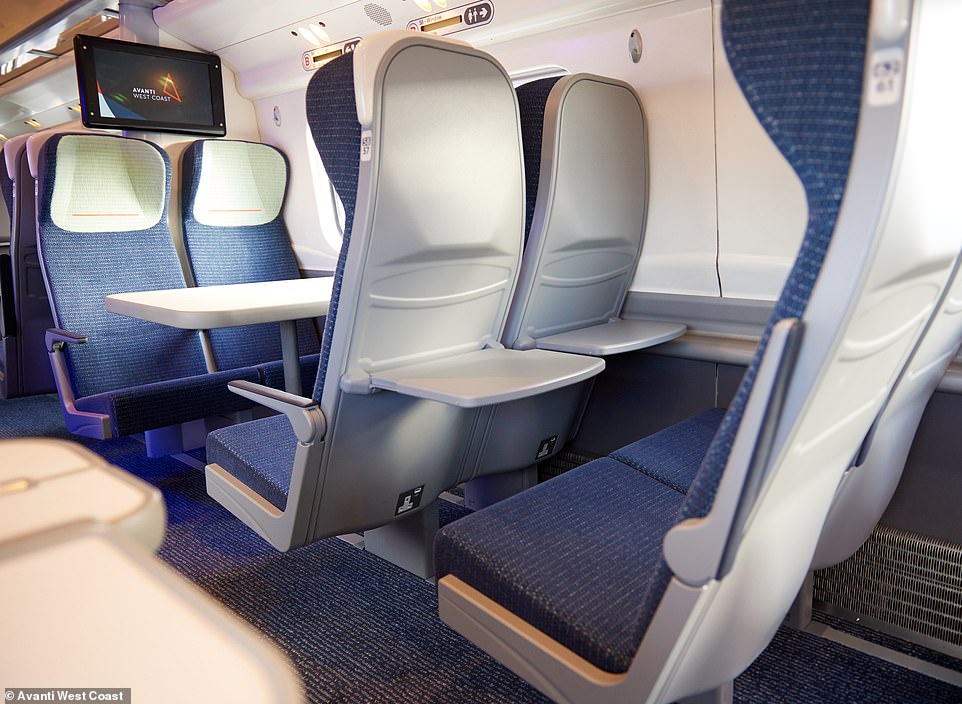 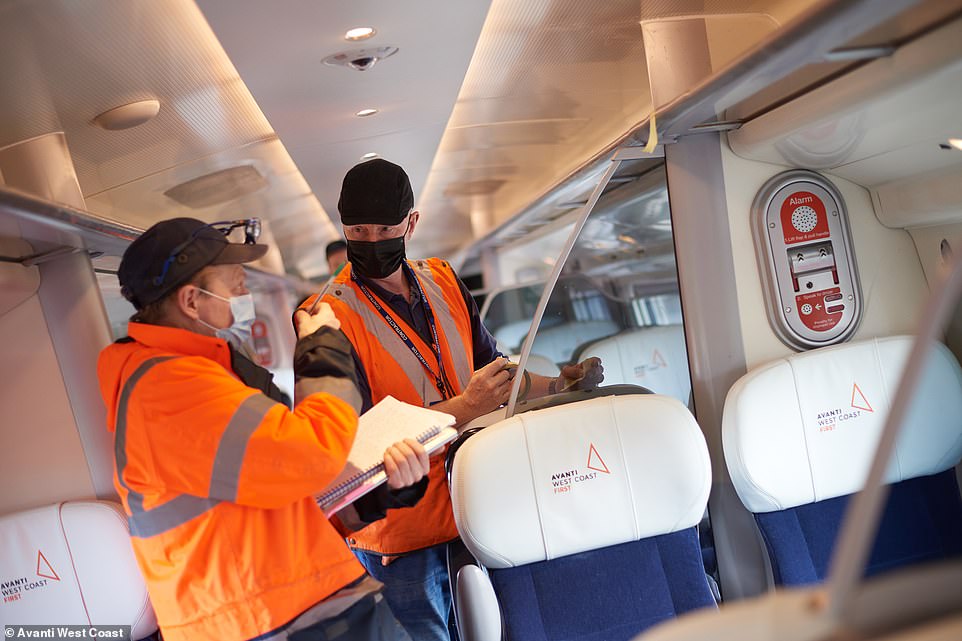 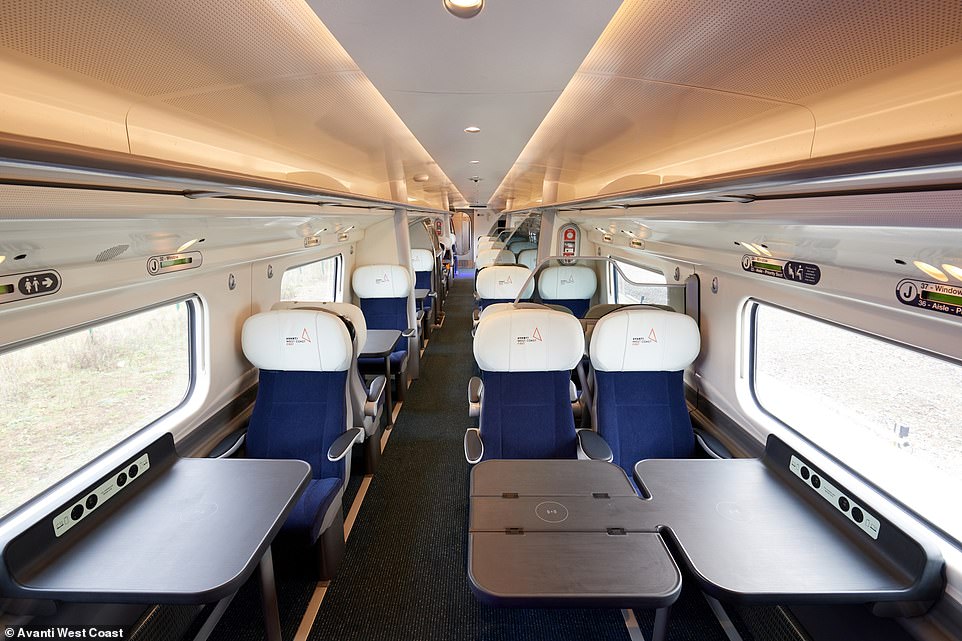 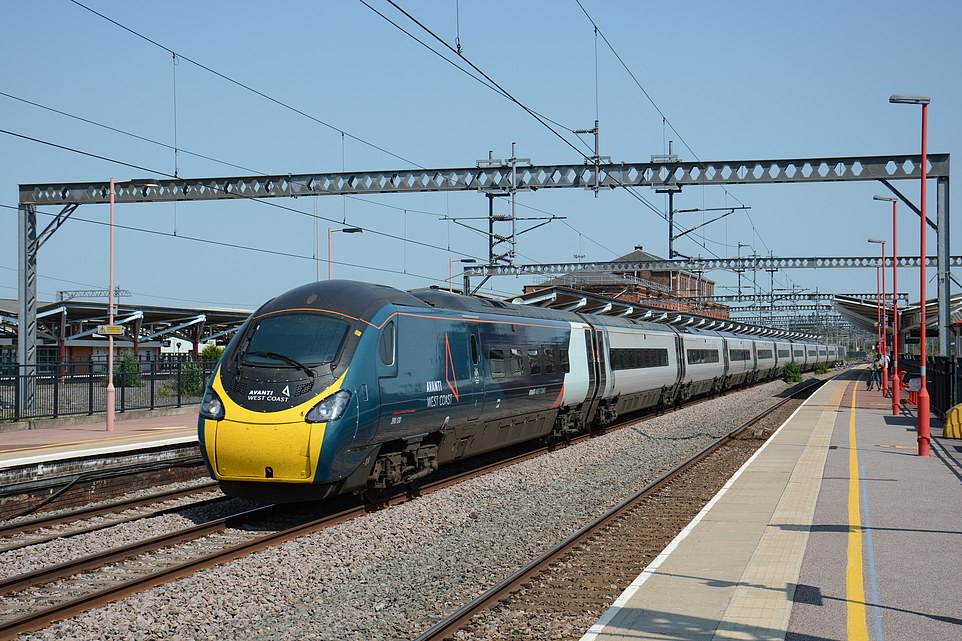 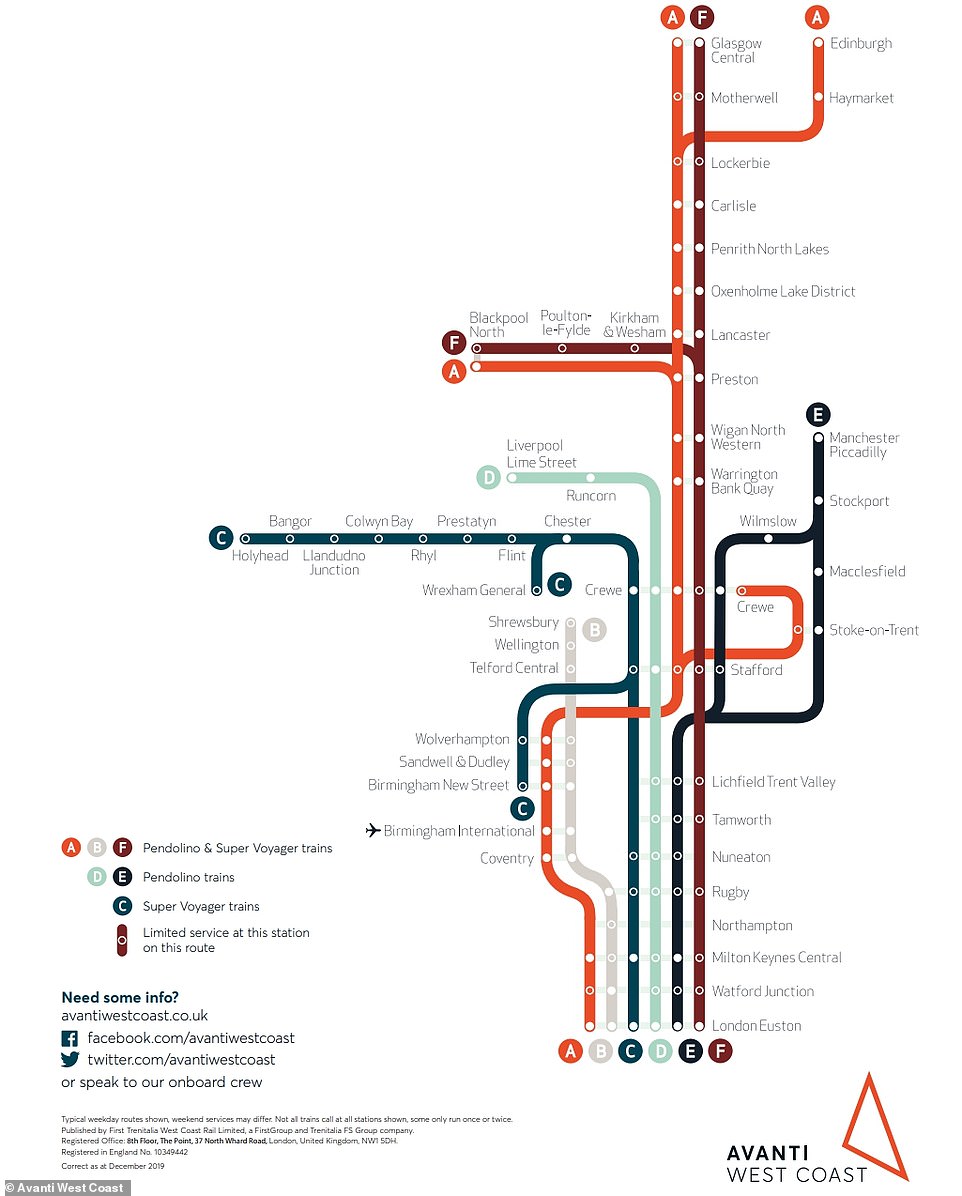 Avanti runs services from London to the likes of Birmingham, Manchester, Liverpool, Blackpool, Carlisle and Glasgow

Avanti’s other train fleet – diesel-powered Voyagers – is being replaced by new electric and hybrid trains built by Hitachi from 2023. Rail minister Wendy Morton said: ‘The iconic Pendolino is back and better than ever before.

‘This refurbished version of the classic fleet is a fantastic example of our cutting-edge rail network and how our railways are leading the way in creating a cleaner, more environmentally friendly and modern transport system.’

What changes are being made to the Avanti West Coast Pendolinos?

The refurbishment is being carried out by manufacturer Alstom at its new depot in Widnes, Cheshire – and rolling stock asset manager Angel Trains has financed the programme, which is due to run until 2024.

Avanti managing director Phil Whittingham said: ‘This investment has been one of the key promises to our customers, and they will see a dramatic transformation of our well-loved fleet.

‘The refurbished Pendolinos look and feel like new trains, with state-of-the-art technology as well as brand new seats that promise best-in-class comfort.’

The operator has spent two years planning for the upgrades and said it involved experts in technology, customer information and ergonomics, with 25,000 new and ‘ergonomic’ standard class seats being fitted.

Peter Broadley, managing director for services at Alstom, said: ‘We are delighted with the launch of the newly modernised Pendolino. Working closely with our partners at Avanti West Coast and Angel Trains, we have created something truly special for the customers travelling on the West Coast Mainline.

‘Our team at Widnes have created something amazing and we are incredibly proud of the final product. We hope it secures the future of the Pendolinos on the West Coast for many years to come’.

And Malcolm Brown, chief executive of Angel Trains, said: ‘We are delighted to see the first of our new refurbished Pendolino trains re-enter passenger service.

‘As one of the UK’s most iconic fleets, this project demonstrates how, through sustainable methods, existing trains can be renovated to provide a top-tier passenger experience.

‘It has been a pleasure to collaborate with our industry partners to deliver a fast, comfortable, and low carbon mode of transport for passengers on the West Coast Main Line.’ 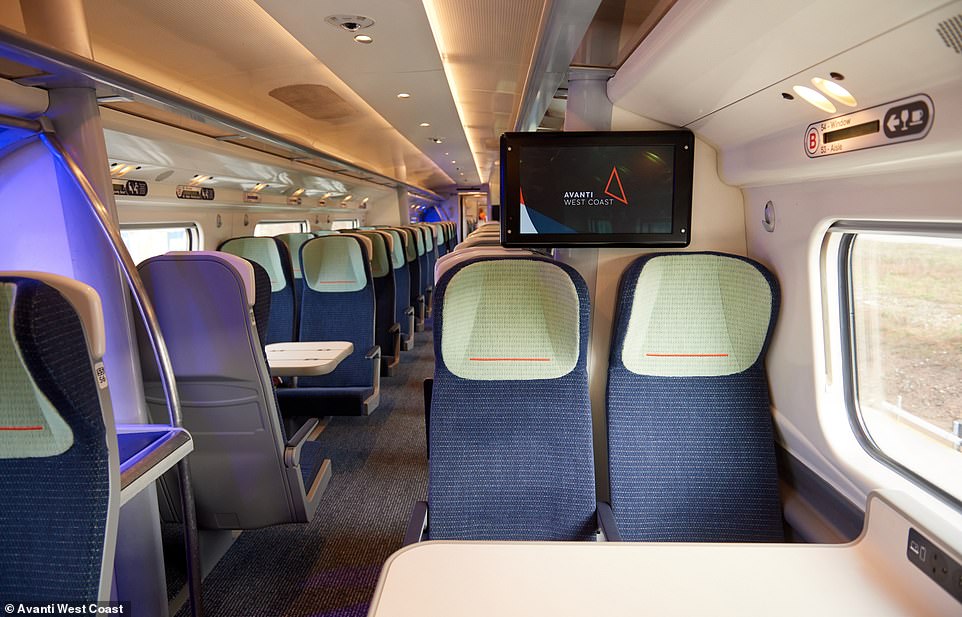 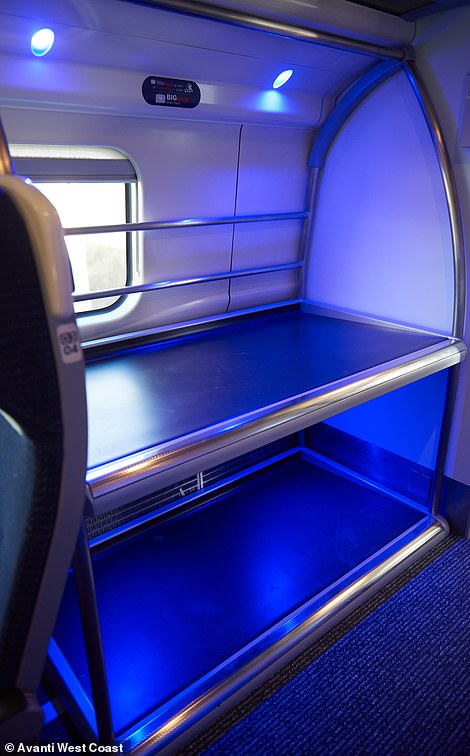 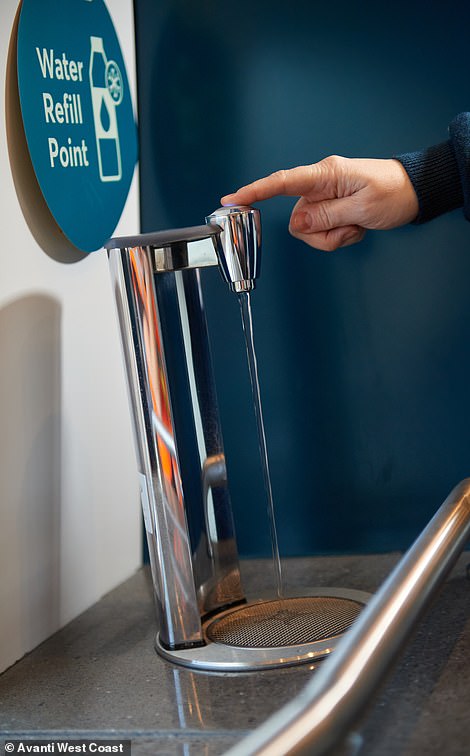 Changes to the Pendolino trains by the operator Avanti include upgraded lighting, refurbished toilets and a water refill point 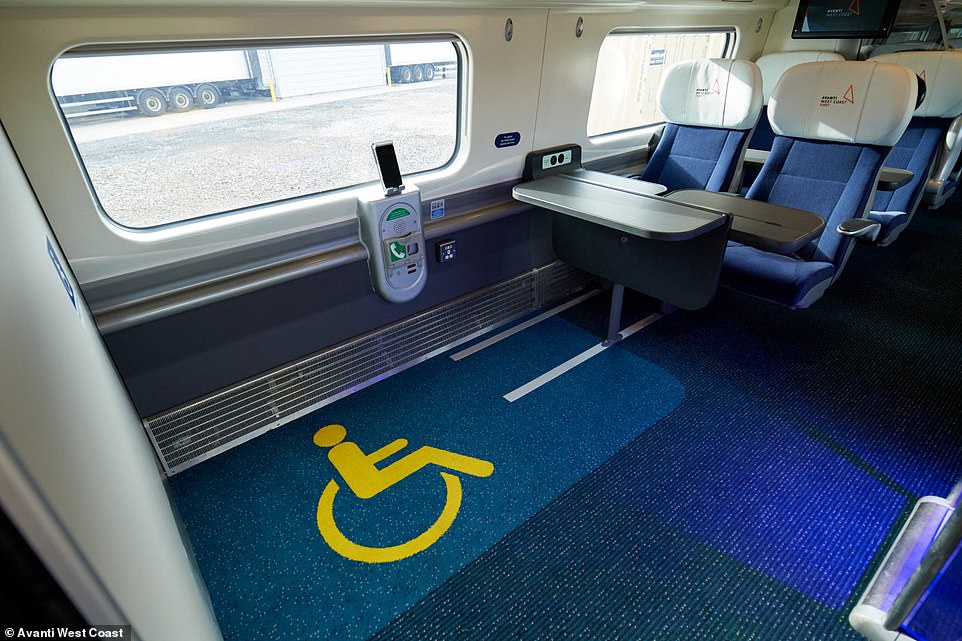 The section for wheelchairs on board the newly-upgraded Pendolino trains, the first of which is now running on the network 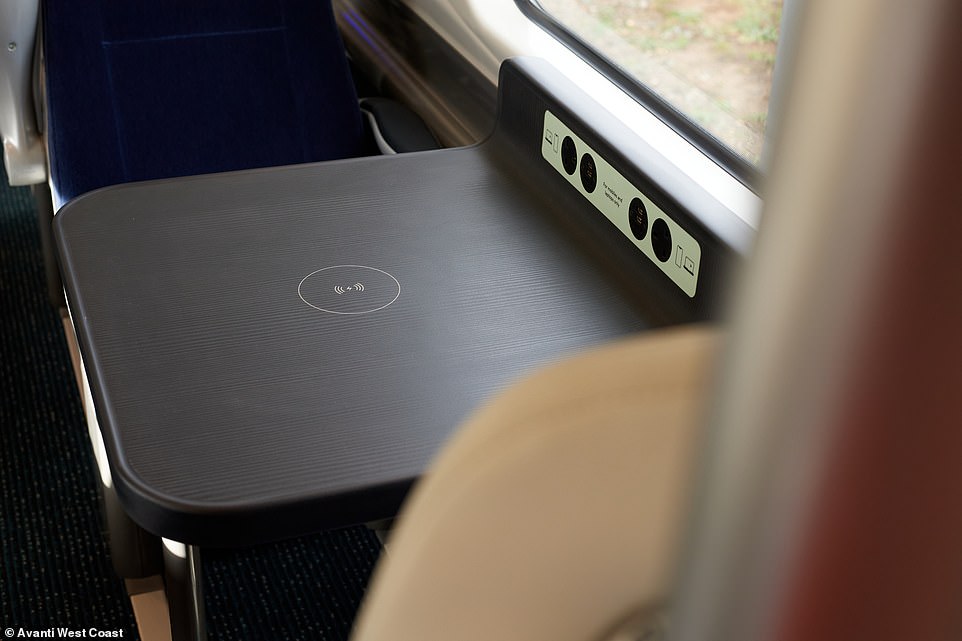 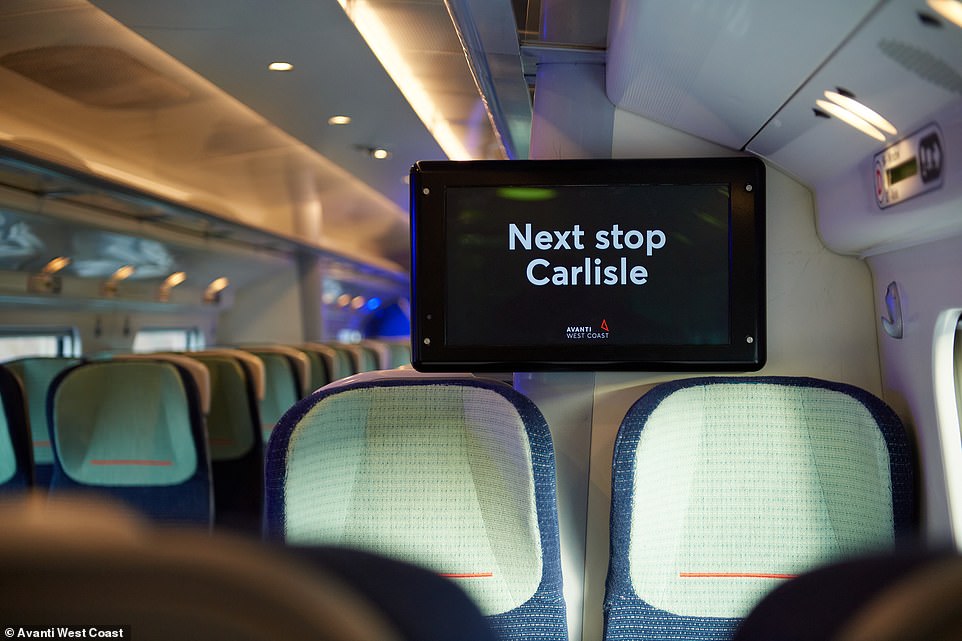 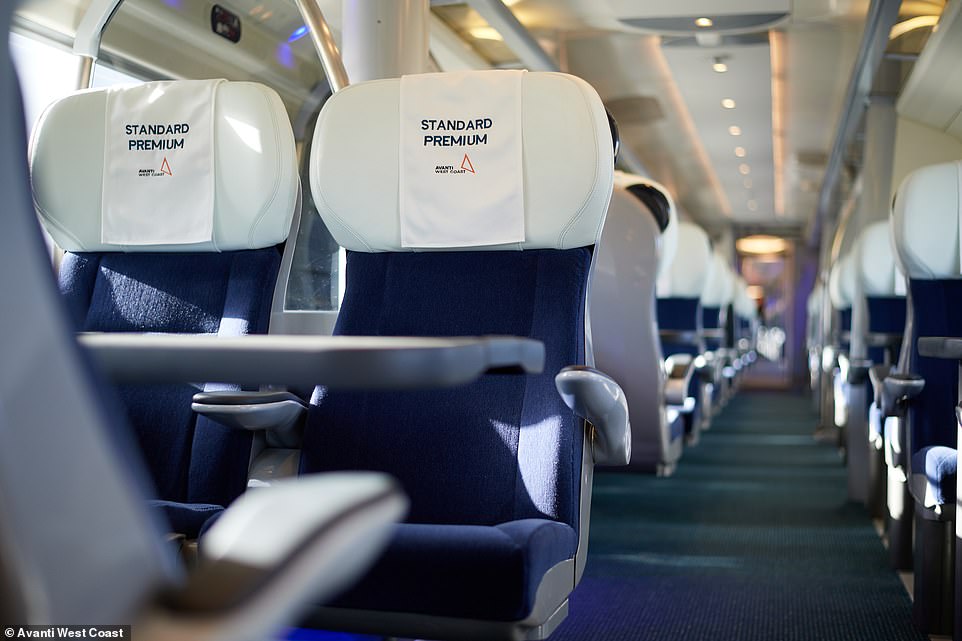 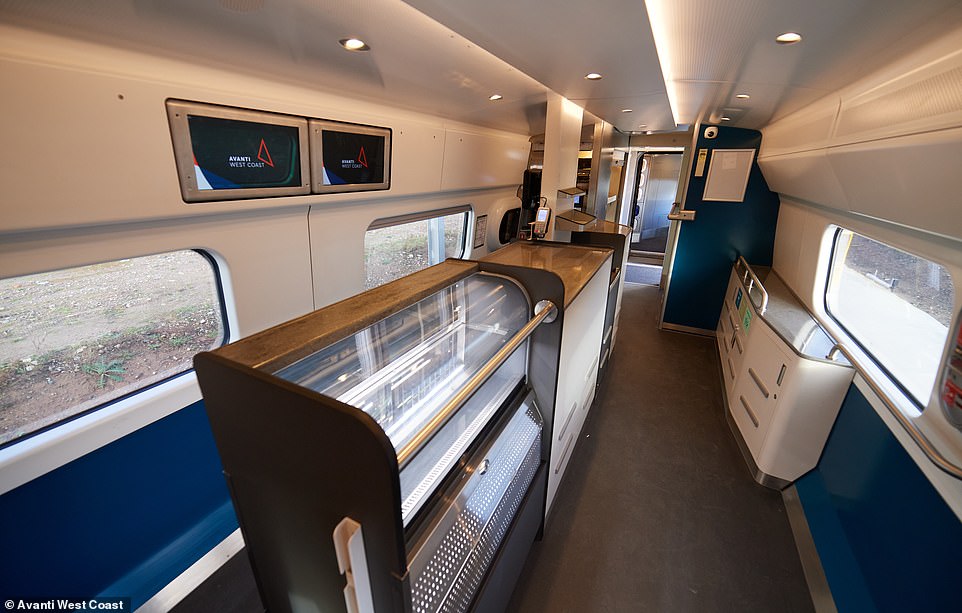 The trains have a redesigned shop and will operate on the Avanti West Coast line, with the rollout over the next two years

In May last year, Avanti became the first operator in decades to offer three classes of travel on the UK domestic railway, when it launched a ‘premium economy’ section with wider seats, more leg room and a guaranteed table.

The ‘Standard Premium’ service was positioned between standard class and first class, meaning customers will not receive complementary refreshments.

Third-class rail travel was abolished on domestic trains in Britain in 1956, and renamed second class before later being branded standard class.

FirstGroup, the majority owner of Avanti, was said to have considered introducing three classes on West Coast services in an ill-fated 2012 franchise bid. 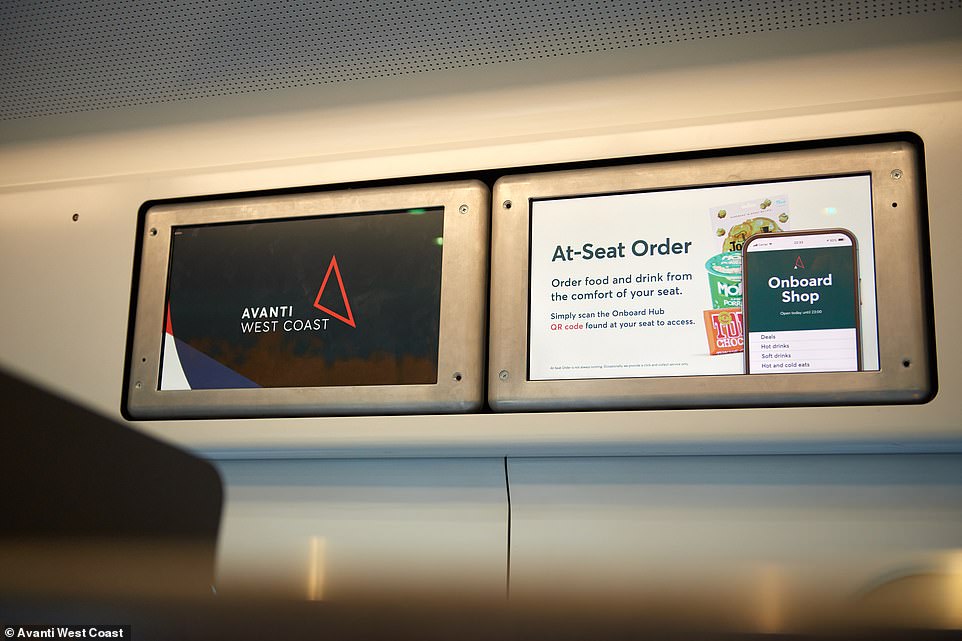 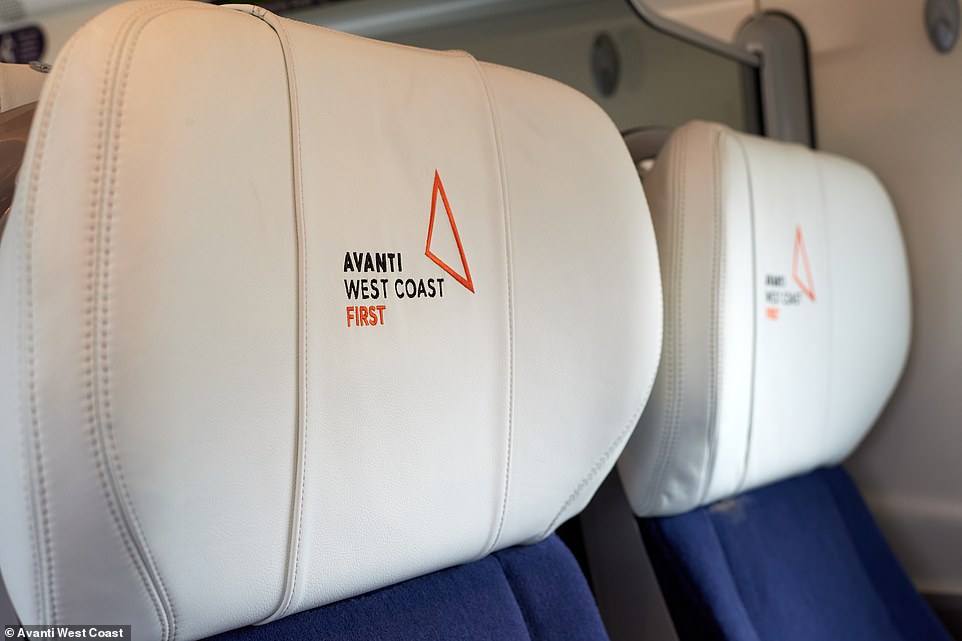 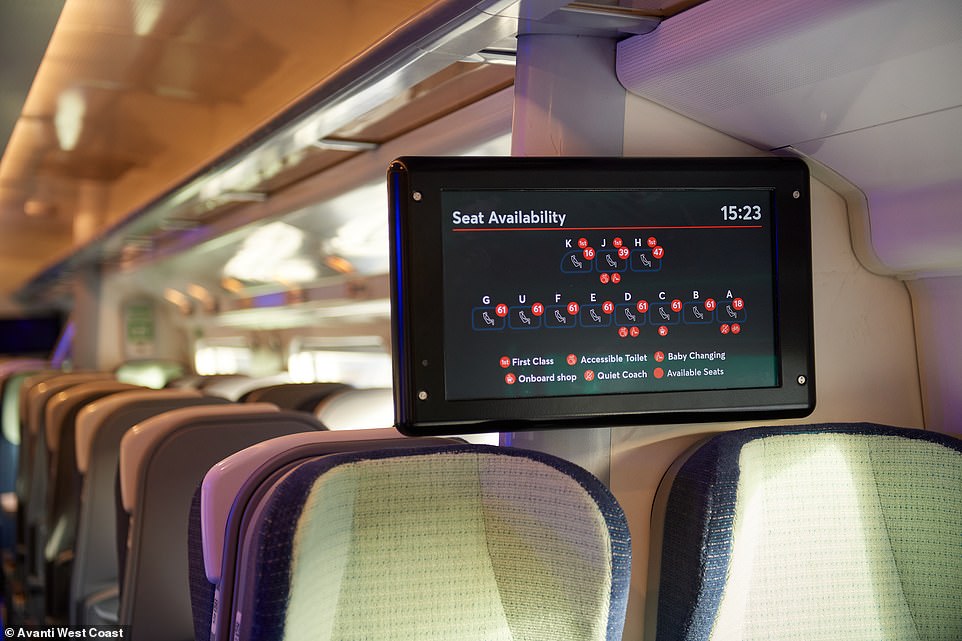 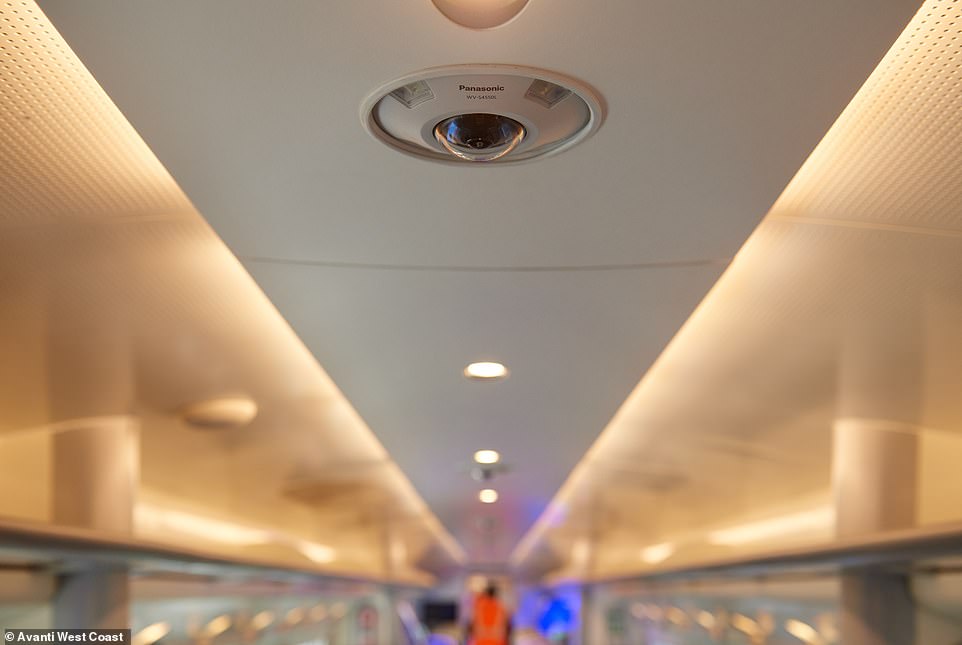 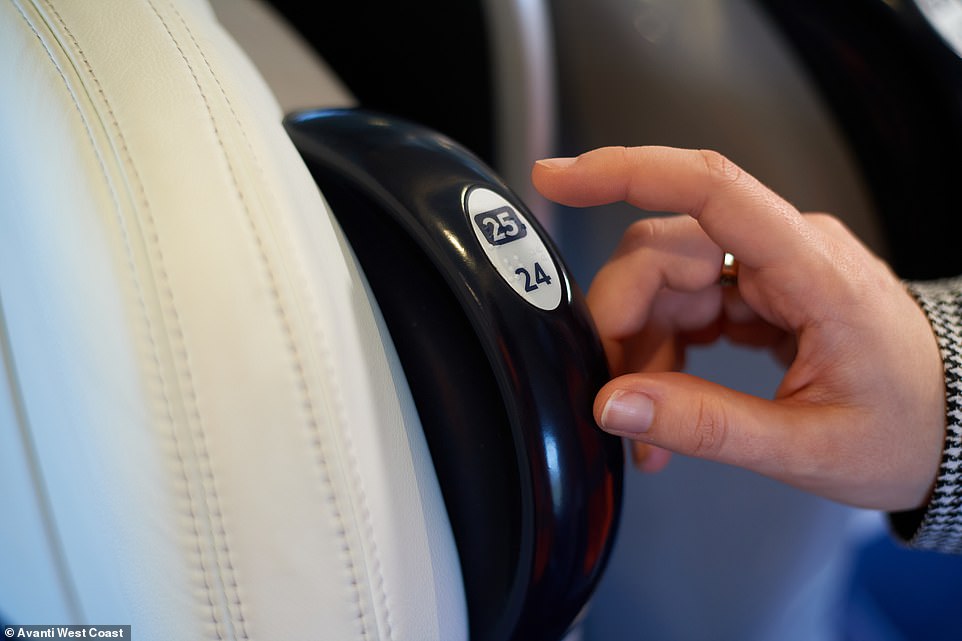 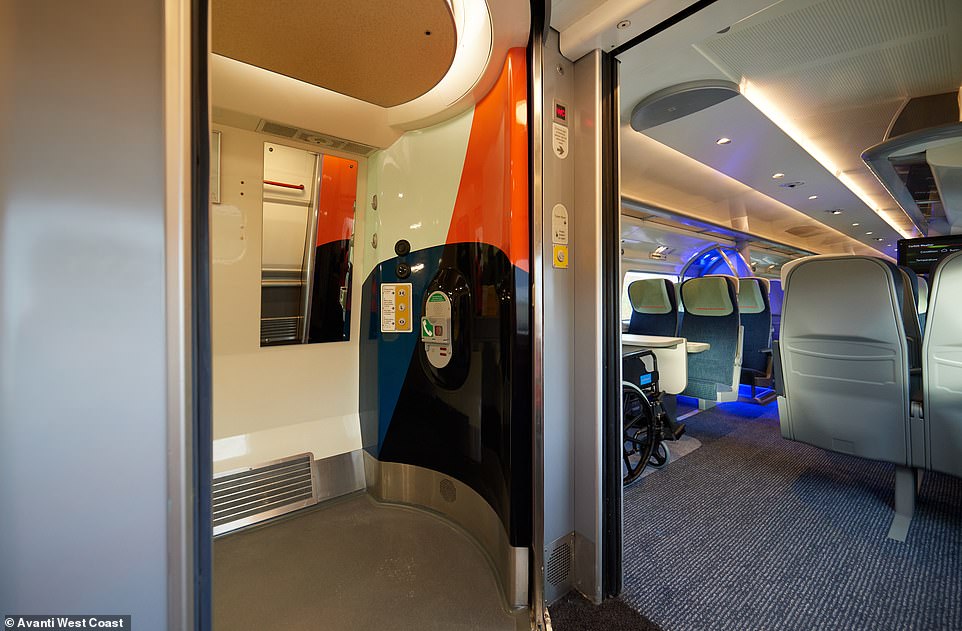 A year later, the Department for Transport was forced to deny it was planning to require a ‘third-class service’ to be introduced on the East Coast Main Line, after a three-tier system was included in a leaked franchise prospectus ahead of a return to private ownership.

Meanwhile, the Mail On Sunday reported yesterday that a half-price ticket campaign to encourage people to return to the railways had been dubbed the ‘Great British Rail Fail’ by critics.

The sale, publicised last week by Transport Secretary Grant Shapps, offers the discounted fares on travel from tomorrow until May 27.

But figures from the Office of Rail and Road and the Department for Transport suggest that of the potential 150 million journeys that could take place in those five weeks, only one million will have the discounts – or 0.66 per cent.