With Day 2 in the books, we're now past the two busiest days of the Australian Open. The second half of the men's and women's fields played on Tuesday, and the top seeds (minus the deported Novak Djokovic, of course) mostly rolled through to the second round — with a few notable upsets along the way.

Top seeds head to Round 2

There weren't a ton of surprises in the Top 10 women's and men's seeds on Tuesday. No. 2 Aryna Sabalenka thrashed her wild-card competitor after dropping the first set, and No. 3 Garbine Muguruza whipped past Clara Burel in two sets. No. 7 Iga Swiatek and No. 10 Ana Pavlyuchenkova both dominated their competitors and will also be moving on to Round 2.

On the men's side, the fourth-seeded Stefanos Tsitsipas, who nearly beat Djokokvic in the French Open finals last year, easily dispatched his competitor, as did No. 5 seed Andrey Rublev. Daniil Medvedev, the 2021 US Open champion who made it to the finals in Melbourne last year, beat his competitor in straight sets, though the No. 2 hit a snag in the final set and had to play a tiebreaker

Familiar faces put on a show

On the familiar faces front, the legendary and well-loved Andy Murray gutted out five sets over nearly four hours to make it to Round 2. The crowd was thoroughly behind him (as they are pretty much anywhere he plays).

What a moment. What a [email protected]_murray you absolute legend 💪

The equally legendary (though somewhat less loved) Nick Kyrgios can always be depended on to put on a show, and he didn't disappoint. Playing in front of a home country crowd, Kyrgios served and hit shots from between his legs and drank a fan's beer during his straight-sets win over qualifier Liam Broady.

Your front row seat to the @NickKyrgios show 🤩

One of the main storylines from the 2021 season was the breakout of young talent, and those players are (mostly) continuing establish themselves on the circut. Emma Raducanu, the 19-year-old 2021 US Open winner, beat American Sloane Stephens in three sets on Tuesday. Stephens had been resurgent in 2021, and put up a fight, but she was unable overcome Raducanu, who won 6-0, 2-6, 6-1.

A Melbourne moment to remember ✨

🇬🇧 @EmmaRaducanu opens her account at the #AusOpen with a first round victory over Sloane Stephens, 6-0 2-6 6-1.

Another headline-making younger player, 21-year-old Felix Auger-Aliassime, battled past Emil Ruusuvuori to make it to Round 2. Auger-Aliassime, who had an outstanding 2021 that he capped off with a trip to the US Open semifinals, almost lost on Tuesday after Ruusuvuori took 2-1 lead after three sets, but he roared back with decisive wins in the final two sets.

Leylah Fernandez, the 19-year-old Canadian who faced Raducanu in the US Open final last year, unfortunately won't be headed to Round 2. She lost to Australian wild-card Maddison Inglis in two sets. 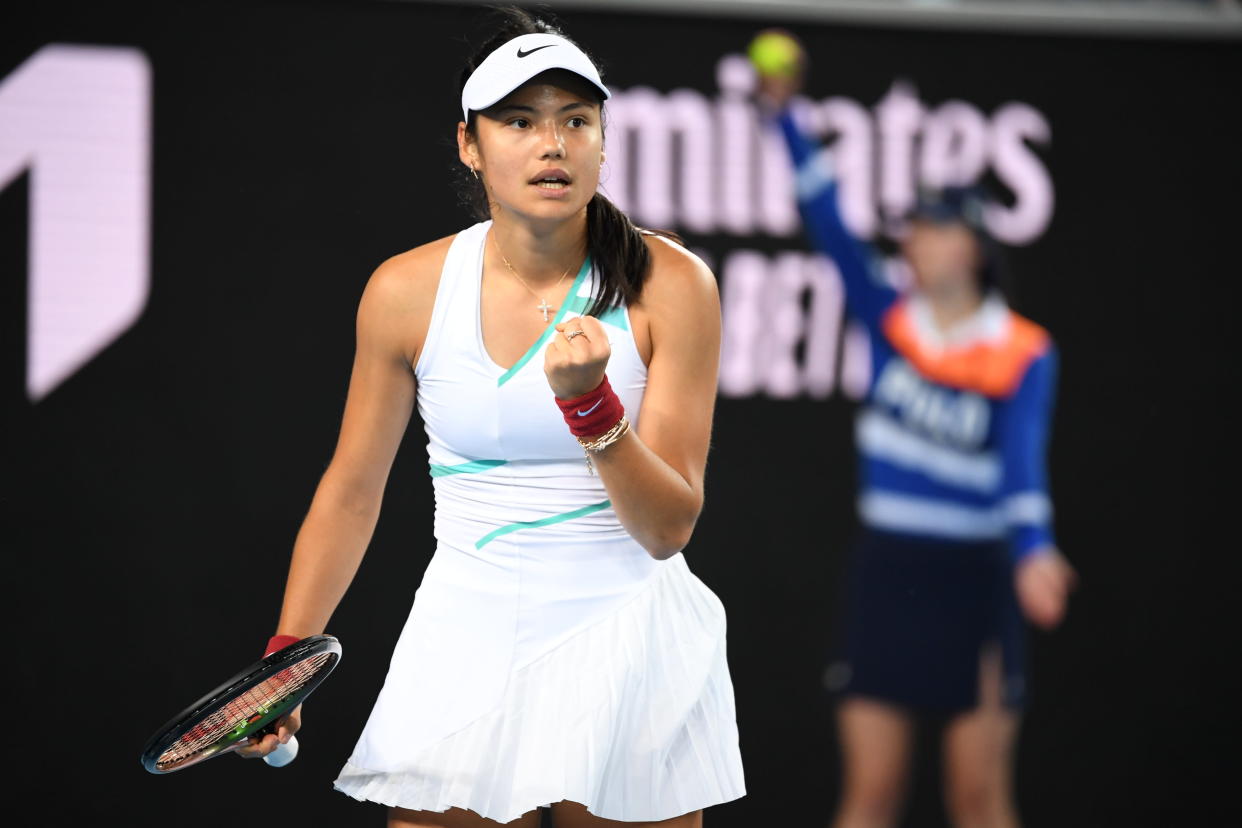 Beyond Fernandez's loss, there were a handful of other unexpected upsets in Day 2. Angelique Kerber, the 2016 Aussie Open champ, lost to unranked player Kaia Kanepi in straight sets. Kerber was seeded at No. 16 and had come off impressive showings at last year's Wimbledon and US Open, but it looks like the 34-year-old is starting from scratch again this year.

Petra Kvitova, seeded at No. 20, lost to Sorana Cirstea on Tuesday. Kvitova, who lost to Naomi Osaka in the 2019 Australian Open finals, struggled with her form through most of 2021.

American John Isner, the No. 22 seed, sadly crashed out in Round 1, losing to unseeded American Maxime Cressy. It was an epic five-round match that took over four hours and included three tiebreakers, and Isner couldn't find the points he needed in the final set.