Australia will face significant pressure to join US military action in the Taiwan Strait if China’s military escalates its threats to its island neighbour, strategic experts say, after days of harassment from Chinese bombers and fighter jets.

Defence Minister Linda Reynolds on Monday called for “restraint and peace” after China sent more than two dozen warplanes over the strait at the weekend.

The show of force came days after US President Joe Biden’s inauguration and the release of the Trump administration’s Indo Pacific strategy, which re-committed the US to defending Taiwan. 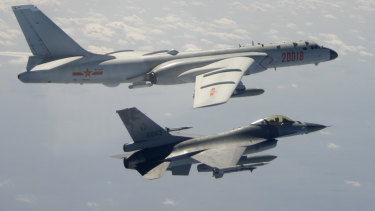 A Taiwanese Air Force F-16 in foreground flies on the flank of a Chinese People’s Liberation Army Air Force H-6 bomber in 2020. Credit:AP

“The Australian government continues to watch very carefully what is happening in the Taiwan Strait,” Reynolds said. “We would say to all parties to settle their disputes peacefully and to do it in accordance with international law. And to take into consideration the wishes of people on both sides of the Strait.”

The democratic island, which China is determined to unify with by 2049, is set to become a focal point of Chinese President Xi Jinping’s ambitions after the Chinese Communist Party suppressed the pro-independence and pro-democracy movement in Hong Kong. The sudden ramp up in military incursions, the largest since August, included six J-10 fighter planes, four J-16 strike fighters and two anti-submarine aircraft.

Taiwan’s President Tsai Ing-Wen and Foreign Minister Joseph Wu have made direct public appeals to the Australian government to help prevent China from further expansionism. Wu warned in December that Chinese military build up had made Taipei very concerned about “the real prospect” of Beijing launching a military attack against Taiwan. Tsai has said the risk of accidental conflict driven by the military sorties is rising. 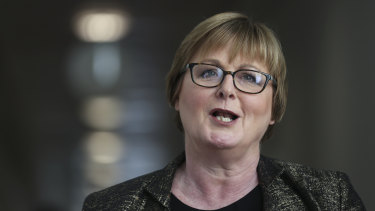 Mark Harrison, a Taiwan expert at the University of Tasmania, said China’s recent actions were “a systematic escalation of the round of military intimidation” but were also aimed at testing the early days of the Biden administration.

The US aircraft carrier Theodore Roosevelt arrived in the South China Sea on Saturday. The US State Department on Monday said it hard urged Beijing to cease its military, diplomatic, and economic pressure against Taiwan.

“As an ally of the US, Australia would be under very significant pressure from Washington to support any US military action in the Taiwan Strait,” Harrison said. “The Biden administration has also clearly signalled its intention to act in partnership with its allies.”

Biden has said his commitment to Taiwan is “rock-solid” but Australia has yet to publicly decide how it would respond in the event of an attack. The issue is highly-sensitive at a time of historically low ties between Canberra and Beijing, while also raising challenges for the ANZUS treaty, which compels Australia and New Zealand to support the US.

The Trump administration’s Indo Pacific strategy, which is expected to be largely continued and enhanced under Biden, was declassified in mid-January, decades before it was due to be released.

Paul Dibb, a former defence and intelligence official who is now emeritus professor of strategic studies at the Australian National University, said that if “American troops were being killed across the Taiwan Strait and we don’t offer to support America, the future of the ANZUS treaty would be at risk”.

“What we are seeing clearly is Xi Jinping becoming more assertive,” he said. “There is a median line that runs down the Taiwan strait. It is only relatively recently that they have decided to transgress it.”

At the same time as it escalates its threats, China is also expanding its capability. Chinese People’s Liberation Army officers were last week deployed for training with naval bases in the Northern Theatre Command. The developments, designed to “normalise cross-service training” according to China’s Ministry of Defence, will help bolster its ability to deter or mount an amphibious invasion.

Harrison said Beijing was unlikely to present the US and the region with a clear choice over Taiwan’s military defence.

“It is more likely to take incremental actions, such as initiating a limited aerial or naval engagement in the Taiwan Strait or landing troops on a disputed outlying island, and then seek to win the crisis and extract concessions,” he said.