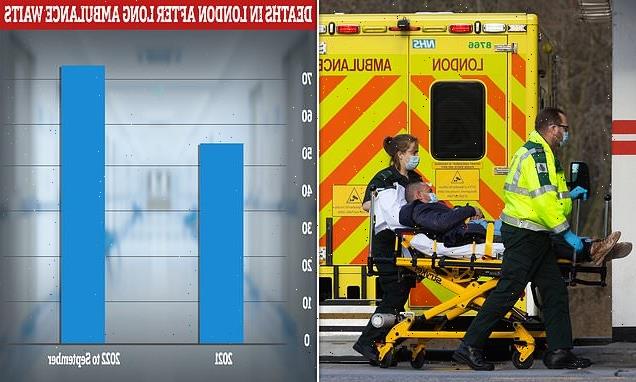 EXCLUSIVE: At least 64 people have died in London this year after waiting a dangerously long time for an ambulance, figures reveal

At least 64 patients died in London this year after dangerously long ambulance waits saw their medical emergencies including strokes deteriorate to immediately life-threatening.

These patients were among the 4,700 in England this year who waited more than 40 minutes as their 999 calls were upgraded to the most serious level, according NHS data exclusively obtained via Freedom of Information and analysed by MailOnline.

Ambulance Trusts in England should attend 90% Category 2 999 calls – which includes strokes and early heart attack signs – within 40 minutes and within 18 minutes on average.

Sometimes these calls are upgraded to Category 1 which is an immediately life-threatening condition, for example when pre-cardiac arrest symptoms worsen or stroke patients deteriorate.

An NHS report into ambulance triaging states that an extra 15 minute response time for a Category 2 call is ‘likely to affect outcome’.

The London Ambulance Service logged that 64 patients – who had their calls upgraded from C2 to C1 – died at the scene this year after wait times of 40 minutes or longer.

This is already more than the 46 patients who died in these circumstances in London in all of last year.

Due to the way data is recorded by the trust only deaths on-scene – before and after the arrival of a paramedic – are included in the data.

Of the 64 patients who died this year, 30 had to wait over an hour and six faced total waits of more than two hours. 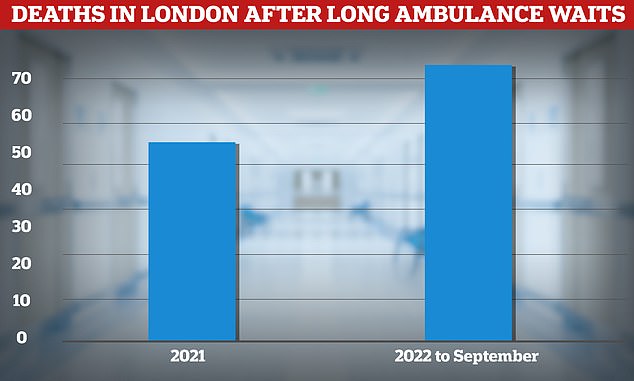 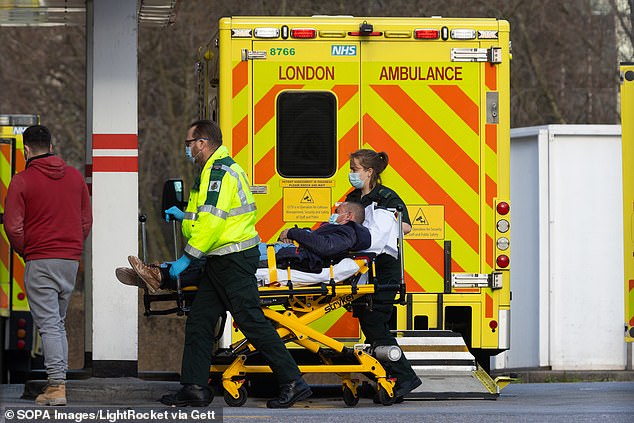 More than 15,000 (30%) of the 53,000 calls upgraded mostly from C2 to C1 made in England this year – up to September – took more than 18 minutes for a paramedic to arrive – and over 4,700 (9%) calls took at least 40 minutes (file photo of paramedics seen pushing a stretcher with a patient from an ambulance to the Accident and Emergency Ward at St Thomas Hospital)

The London Ambulance Service (LAS) received a C2 call about a patient Harrow with breathing problems at 2.20am on June 26 this year. The patient had two wait two hours and 54 minutes until the call was upgraded to C1 at 5.15am.

Paramedics arrived seven minutes later bringing the total wait time to over three hours. The patient died at the scene.

Another patient in Havering suffering from a serious Covid-related issue on March 29 at 5.50pm saw their call upgraded to C1 2 hours and 25 minutes later at around 8.20pm.

After another 25 minutes paramedics arrived at around 2.45pm. The patient died at the scene.

At 3.50am on September 2, the LAS received a call regarding patient in Ealing with breathing problems. Their call was upgraded to C1 two hours and 37 minutes later just before 6.30am.

Paramedics arrived less than one minute later. The patient died at the scene.

The number of deaths for upgraded 999 calls are unknown for other regions as the London Ambulance Service were the only trust able to provide this data.

But nationwide, patients are having to wait a dangerously long for paramedics to treat serious injuries and conditions – with delays resulting in medical issues becoming critically life-endangering.

All regional figures are for C2 calls upgraded to C1 aside from the East of England Ambulance Service who could only provided figures for all calls – regardless of initial category – upgraded to C1.

Over 700 patients with upgraded 999 calls waited over two hours for a paramedic and more than 270 had to wait a total of more than three hours. 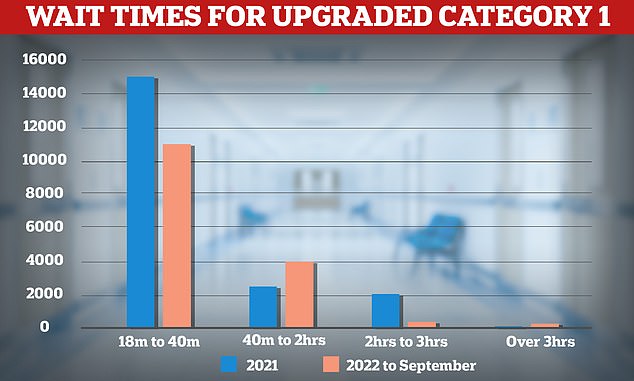 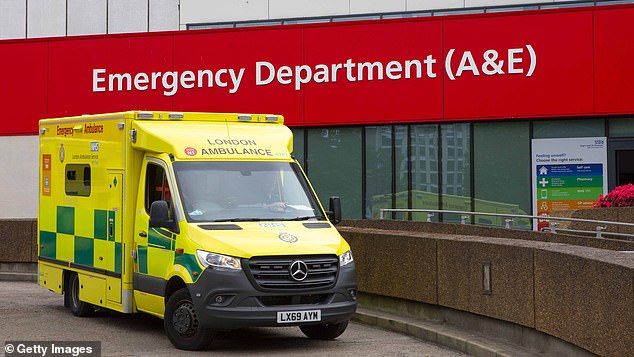 On April 4 this year, two patients in the East Midlands had to wait around 12 hours for an ambulance for their Category 2 emergency.

One patient in Leicester suffering from an overdose or poisoning had to wait 12 hours and 37 minutes rom when their call was initially answered at around 7pm before their call was upgraded to Category 1 at around 7.45am the next morning.

They were then seen by a paramedic within two minutes. It is unknown what the medical outlook for the patient was but they were taken to hospital.

Another patient suffering from Covid on the same date was initially triaged as a C2 call at 10.20pm before being upgraded to C1 11 hours and 45 minutes later at just after 10.05 am the next morning.

A patient who had a fall at around 7.30pm on August 2 had to wait a total of 10 hours and 35 minutes before an ambulance arrived.

They even had to wait 1 hours and 25 minutes after the call was upgraded – despite C1 targets being just 7 minutes on average. The patient was treated at the scene and their prognosis is unknown.

Unite the Union, who represent paramedics, called the figures ‘disturbing and alarming’ proof that lives were being ‘lost due to a lack of funding’.

This exclusive analysis by MailOnline lays bare the crisis facing English ambulance as it was revealed that a dying baby had to wait half an hour for paramedic treatment.

Wyllow-Raine Swinburn’s mother Amelia Pill, 29, believes emergency services could have saved her child if they had arrived sooner.

The West Midlands and London Ambulance Services will also be joining a trial to downgrade some C2 medical issues to reduce waiting times, the BBC reports.

Headline NHS figures have shown that average wait times for C2 999 calls are well over the 18 minute target at 48 minutes – as of September this year. Averages have risen from around 24 minutes in 2017.

The 90th percentile target of 40 minutes for C2 calls is also not being hit – with 90% of patients only being seen within one hour 45 minutes.

MailOnline has approached the London Ambulance Service but it has not yet provided one.