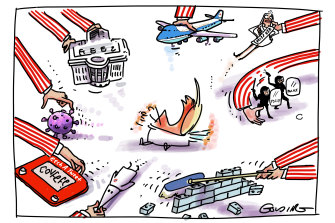 To submit a letter to The Age, email [email protected] Please include your home address and telephone number.

Ask them, don't tell us

Your correspondent (Letters, The Sunday Age, 1/11) writes ‘‘The ABC represents my views on a wide range of matters’’, and that’s the problem. The ABC shouldn’t be representing anybody’s views on anything.

The ABC interviews many people about social and economic issues. Interviewers should ask hard and impartial questions, and they should not take up the cudgels in support of particular positions.
In my view, some interviewees on the ABC are generously treated while others are grilled. We all have a world view, but interviewers should suppress their own when getting behind a microphone.
Al Morris, Doncaster

One person’s left …
It would be interesting if those who rail against the ABC as being ‘‘too left wing ‘‘ could inform readers just what that term means in the context of reporting.

Perhaps Jeff Ballon (‘‘‘Left-wing as you can get’: Going cool on the ABC’’, The Sunday Age, 1/11) presents a typical example of this view. He says he is an LNP supporter, but fair. He believes the ABC is biased against the Coalition when it comes to ‘‘politics, climate change, anything’’.

Can we extrapolate from that that anything the ABC commentates on that doesn’t fully endorse Coalition views is ‘‘too left wing’’? I’m sure that many would be enlightened if some of those currently espousing this belief of the ABC could provide some specific examples of just what ‘‘too left wing’’ means other than it is simply not in accordance with their personal views.
Bill Pimm, Mentone

My heart sank
The article ‘‘Before you rush to the regions’’ (The Sunday Age, 1/11) made my heart sink as a Melburnian.

Please don’t segregate us at regional restaurants. We have already been segregated. We have endured stage four lockdown and now are recording zero cases.

When I am able finally to dine in regional Victoria I will not eat where I am treated like a leper and segregated from locals. If you have a good COVID plan in place all regional restaurants should welcome Melburnians as they would anybody else.
Jennifer Eagles, Hawksburn

The challenges ahead
Should Joe Biden become the next American president, he will face some unprecedented challenges. After a particularly nasty and divisive campaign, he will have the mammoth task of effecting a reconciliation between the different sides of the political spectrum.

He has started well by calling for calm and this is exactly what is required now in this limbo period. He will also have to translate his campaign slogan, ‘‘Restore the soul of America’’, into practical policies for the many problems besetting the US: violence on the streets, terrible access to healthcare, unemployment, and lack of educational opportunities.

We can only hope he can bring this off, and return the US to a country in which civil discourse is not only possible, but thrives.
Helen Scheller, Benalla

A poignant read
Having just read Jon Day’s superb Homing: on Pigeons, Dwellings and Why We Return, it was poignant indeed to read about the sale of the Yarraville Racing Pigeon Club’s premises (‘‘Hall sale puts cat among pigeons’’, 6/11).

One hopes at least Bill Lawry is still racing pigeons and that his birds are faster in the air than he was at the crease.
Michael Read, Carnegie

He’d thrive here, too
I am somewhat amazed that people are surprised by the continuing popularity of Donald Trump in the US.

Do we truly believe he would not be a contender here if he was leader of the conservative side of politics?
Graeme Gardner, Reservoir

My hope lies here
While joined in isolation, I’ve been thinking over days, weeks and months about hope (‘‘The great agony of hope’’, Opinion, The Sunday Age, 1/11). It’s the very thing we cling to, the people we turn to, the novels and films we seek to capture that offer us glimmers of promise.

In her article, Jacqueline Maley frames hope and despair through the lens of a looming United States election – the polls, Biden and Trump, two old white guys and their promises. Yet I feel certain our realm of hope and despair are encased in far stronger stuff than politics. We make our futures through the wisdom we gain and the way we envision possibilities.

Rather than hope and despair being defined by what politicians will or will not do for us, for our country for others’ countries, I tie hope to the possibilities we are able to create through imagining together, critiquing ideas, and inspiring action. We are in the spring of hope and while we’ve sprung wings, we have to learn how to fly solo and flock together.
Gloria Latham, Brunswick East

A vindicated approach
Putting aside how the second wave of COVID-19 started in Victoria, the fact is we faced a serious pandemic.

Having now had eight straight days of zero cases (vindicating the strict approach taken to get us out of it), we should all be grateful Michael O’Brien and his like were not in charge of the recovery program.
Ken Finley, Mount Martha

It must be watertight
Given what all of us in Melbourne have been through in the past seven months, should we not be anxious about returning overseas travellers potentially going straight home to quarantine? We are all aware COVID-19 is rampant overseas.

Constantly monitored and doing the right thing by staying home they may well be, but imagine the temptation for some friends and extended family to ‘‘just drop in for a little while, its been so long, I can’t wait to see them, it will be fine’’. Social distancing is hardly likely in such a scenario. How do we monitor that?

Despite the cost to whoever funds it, despite inconvenience for those individuals, does the entire Victorian community not now deserve absolute and watertight protection from such foreseeable transmission? Surely it’s a no-brainer – we know how easily the virus can spring up again; and we have all lived through and seen the incalculable costs and losses of a pandemic.
Judy Michelangeli, Wheelers Hill