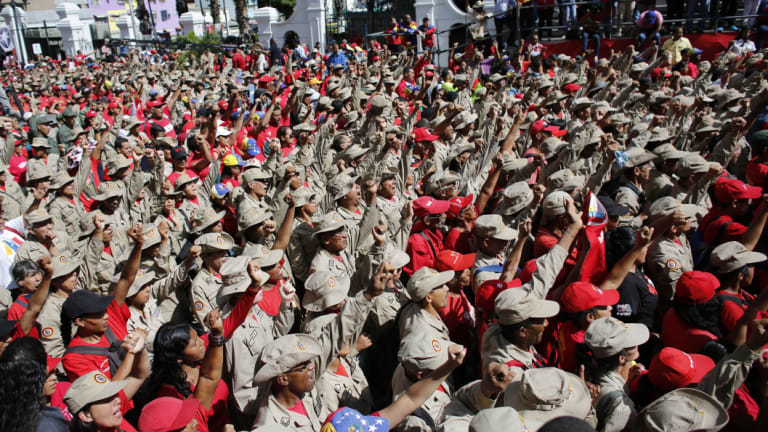 Hyperinflation and shortages of food, medicine and basic goods ranging from car parts to coffins have made life miserable for the millions who remain.

With a dismal 15 per cent approval rating, Maduro has managed to keep himself in power with autocratic and repressive measures, critics say. Earlier this month, the Organisation of American States referred to Maduro's government as "dictatorial", and 13 South American nations in the so-called Group of Lima called for new presidential elections.

Maduro, a 56-year-old former bus driver, union organiser and Chavez bodyguard, has dismissed such demands as a plot orchestrated by the US. Thursday's (Caracas time) inauguration is expected to take place before the supreme court in central Caracas amid tight security. 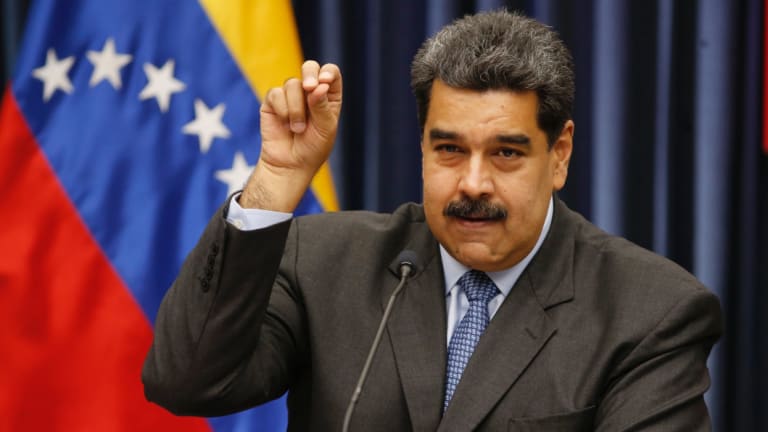 Nicolas Maduro has dismissed calls for fresh elections as a plot orchestrated by the USCredit:AP

"It's the imperialist mentality of the Group of Lima and the functionaries of the European Parliament that believes we have to submit and kneel," Maduro said in a speech to the nation on Monday. "Venezuela must be respected and we will use our political and diplomatic faculties to make them respect us."

Maduro is increasingly isolated, with at least 40 nations, including the US, European Union countries and neighbouring Colombia, refusing to recognise him as legitimate president.

His dwindling base of support includes Bolivia, Nicaragua, Cuba and other socialist governments in the region.

Some of his most vocal critics are from South American nations struggling to cope with the arrival of hundreds of thousands of Venezuelan migrants. Colombian President Ivan Duque, whose country now hosts 1 million Venezuelans, said nations should "reject the Venezuelan dictatorship and do everything necessary to restore democracy and constitutional order".

This week the US Treasury Department added seven more names to a growing list of Venezuelans, including Maduro, accused of corrupt practices, alleging they received $US2.4 billion ($3.3 billion) in illegal proceeds from foreign exchange manipulation and use of sham companies.

Venezuela's economy is one of the gloomiest on the planet. Inflation during last year exceeded 1 million per cent, and its economic output is expected to shrink by 10 per cent this year after declining by 15 per cent last year. The industrial trade group Conindustra reports that of the 12,500 companies that were members in 1997, only 2500 exist today.

"The truth is that all of us Venezuelans are broken, weakened, exhausted and at the mercy of a devastating crisis," said Caracas political analyst and pollster Jesus Seguias. "Millions of human beings are suffering, including those who have left the country as much as those still living here."

Oil production, which in previous years was the source of most of Venezuela's wealth, has fallen precipitously in recent years because of cash shortages and US sanctions that bar the import of oil field equipment and services. From an average output of 2.07 million barrels per day in 2016, crude production declined by more than half last year.

Widespread opposition to Maduro's socialist government led to the election of opposition candidates who took majority control of the National Assembly in 2015. But Maduro immediately moved to block and finally negate congressional powers with decrees and judgments from the Maduro-controlled supreme court.

The final blow came in 2017 when Maduro inducted a new Constitutional Assembly, which, packed with loyalists, dissolved the power of the National Assembly. Critics inside and outside Venezuela slammed the move as illegal and anti-democratic. Maduro's re-election in May, with 64 per cent of the vote, was widely criticised as a sham after several potential opposing candidates were disqualified from running.

For years, Venezuelans have taken to the streets in huge protests against Maduro. In 2014 weeks of demonstrations that often turned violent left 43 dead and 486 injured. In 2017 protests were more widespread and violent, with 157 dead, 15,000 injured and 3000 arrested. Many remain imprisoned.

The Venezuelan Penal Forum, a civil society group that monitors prison conditions, says Maduro is holding 278 political prisoners. Freddy Guevara, a leading opposition assembly member, has been holed up in the Chilean embassy in Caracas since the government issued an arrest warrant a year ago, claiming he incited violence during the 2017 protests.

Tomas Paez, a professor at Central University of Venezuela in Caracas, says at least 4 million Venezuelans have emigrated since 1998, when Chavez first won election. Of those, he estimates 2.5 million have fled since 2015.

"The figures are increasing and will continue to increase as long as the country continues to grow more impoverished," Paez said.

US President Donald Trump has raised the possibility of a military intervention, which has received support from some exiled Venezuelans. But Tulane University professor David Smilde and others say such a move is opposed by most Venezuelans and could lead to a long, bloody civil war, and increase the flow of migrants.

"Diplomacy may be slow and frustrating. But a negotiated settlement would have the support of the people who matter most: the Venezuelans who must survive Maduro's rule," Smilde said.