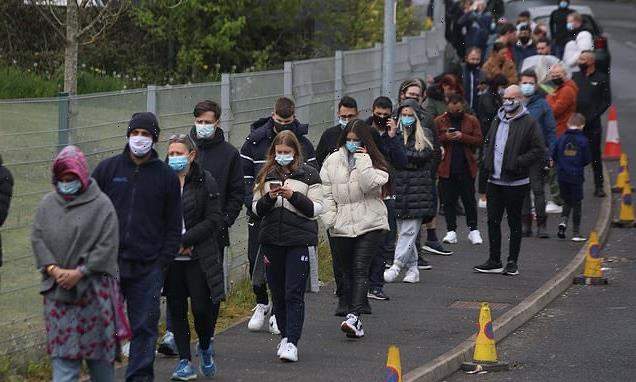 ‘The team will find reason to vaccinate you’: Anyone living in Bolton is invited for Covid jab before 5pm today as race is on to inoculate residents amid fears over spread of Indian variant

Anyone living in Bolton has been invited to get a Covid jab before 5pm today amid fears over the spread of the Indian variant.

Councillor Andy Morgan shared a Tweet inviting Britons of all ages to ‘visit the vaccine bus’ if they live in the area and are registered with a local GP.

He said the team of medics ‘will find a reason to vaccinate you’ before closing time at 5pm.

The 4,000 jabs at the pop-up centre must be used before the end of the day, he added.

The area has seen a surge in cases of the ‘highly-infectious’ Indian Covid variant, which now makes up the majority of it’s new cases.

And Government scientists fear the ‘highly transmissible’ Indian variant could be 50 per cent more infectious than the Kent strain – which models project could lead to 1,000 deaths a day, as well as 10,000 daily hospitalisations, by the summer.

Boris Johnson has pledged to ‘throw everything we have’ at keeping cases of the Indian variant down and is set to send the Army into Britain’s worst hotspots – including Bolton – to hand out tests in a bid to slow the spread.

Pop-up vaccination sites are also being set up to speed the inoculation drive.

These includes Bolton, where today’s pop up centre at the Essa Academy school saw queues snaking along the pavement as eager locals waited to get their jabs.

The Prime Minister is pinning his hopes of beating the virus on a ‘flexed’ jab drive. But experts fear vaccinations are not the key to slowing the spread.

Deputy chairman of the Joint Committee on Vaccination and Immunisation Dr Anthony Harnden today said the jab is ‘almost certainly less effective against transmission’ because immunity only kicks in three weeks after the vaccine is given.

He also stressed that while the vaccine protects against ‘severe disease’ – therefore helping keep hospitalisation and death rates down – countless vulnerable people and over 50s still haven’t had the jab at all.

People aged over 50 and the clinically vulnerable will have their second doses of a Covid vaccine accelerated.

Meanwhile, Scottish National Party health spokesperson Dr Philippa Whitford warned you ‘cannot out-vaccinate the variant’ due to the time taken to build immunity once someone gets the jab.

And she stressed that letting the virus ‘run rampant’ in young people who are not yet vaccinated could lead to the creation of more deadly variants.

Mr Johnson has warned England will face ‘hard choices’ if the Indian variant turns out to be much more transmissible than others.

But even so, he announced last night that Britain will press ahead with plans for indoor drinking and dining next week – with ministers today insisting the rule change is the ‘safe and right thing to do’.

Monday’s easing will allow people to socialise indoors in homes, pubs and restaurants, and will permit physical contact between households for the first time in more than a year. 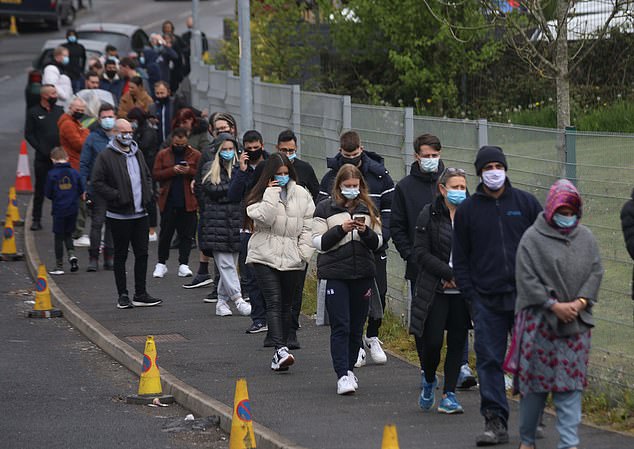 Anyone living in Bolton has been invited to get a Covid jab before 5pm today amid fears over the spread of the Indian variant. Pictured: A queue for the jabs