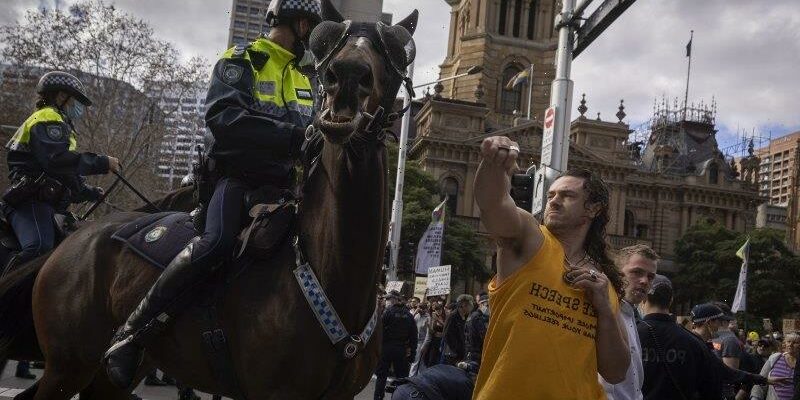 Counter-extremism experts say the people behind Australia’s anti-lockdown protests on the weekend came from a loose coalition of far-right, conspiracy and libertarian groups, their numbers swelled by people who feel, rightly or wrongly, disenfranchised by government. 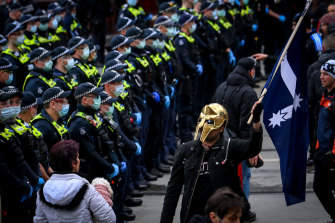 A police line forms at a lockdown protest in Melbourne’s CBD.Credit:Eddie Jim

On Saturday there were also followers of the anti-vaccination group Reignite Australia and members of evangelical Christian churches at the rallies, with some holding signs that read: “Jesus is my vaccine.”

Despite assurances from Facebook that it would remove extremist groups last year, the protests were live-streamed on some Facebook pages.

“It surprised everybody that there was such a big group – a collection of disparate groups who have been working consistently over the whole pandemic to build their support base,” Dr Ross said.

While far-right extremism is not a new phenomenon in Australia, it has been on the rise in the past year in response to federal and state government handling of the coronavirus, she says.

‘You can’t really debate that idea that the world is run by a satanic cabal of paedophile lizards.’

The protests in each city were subtly different, Dr Ross said.

In Brisbane, anti-vaccination sentiments were at the forefront, while in Melbourne the protest signs were dominated by anti-lockdown slogans. The protesters in Sydney on the weekend seemed similar to those at the anti-lockdown protests in Melbourne last year. There was a diversity of people not usually seen at rallies, including those new to public protest, people from a range of ethnic backgrounds, and lots of women.

Meanwhile, the organising in Melbourne had “matured”, with a core group of seasoned protesters streamlining their operations against lockdowns over the past year, Dr Ross said. These include serial protester Matt Lawson, an administrator of an anti-5G Facebook group, who was arrested on Saturday. 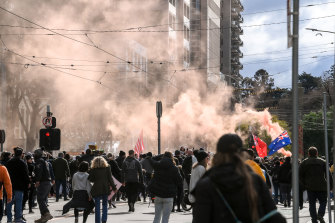 Victoria Police has called on members of the public to call Crime Stoppers if they can identify protesters at the rallies over the weekend, warning offenders will be issued with fines, including seven identified organisers who could face charges of incitement.

“I’d urge every citizen who is outraged by what we saw yesterday that if you know who these people are, then tell us and we will take action,” said Assistant Commissioner Luke Cornelius.

Seven organisers had been warned by police not to promote or participate in the protests but nonetheless turned up on Saturday, he said.

Dr Josh Roose, a senior research fellow at Deakin University, said the protesters were brought together by a feeling of marginalisation and a sense they were the victims of governments. 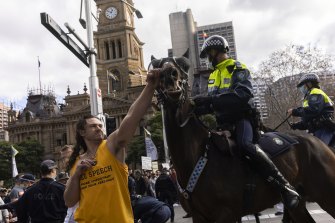 A man hits a police horse during an anti-lockdown rally in the CBD in Sydney.Credit:Brook Mitchell

While it was easy to have a visceral reaction to the illegal protests, it was important to recognise this issue wasn’t going away, he said.

“We really have to engage. Not with their ideas – because they have been debunked on many occasions by science – but with the idea they feel alienated with society.

“This is a global issue that, at its heart, comes back to deepening inequality and a deepening disconnect between citizens and the state.”

Extremism researcher Dr Ross said while it was good that people valued democracy and were concerned about protecting individual liberties and freedoms, the anti-lockdown movement misunderstood what democracy means.

“They talk about their rights as citizens, but we also have a collective responsibility as citizens,” Dr Ross said.

And debating the ideas themselves is often counterproductive: “You can’t really debate that idea that the world is run by a satanic cabal of paedophile lizards.”

Better media and political literacy is needed for consumers to ascertain the accuracy of what they consume on social media, she says.