‘If we don’t notice rough sleepers then there’s something deeply wrong with us’: Andrew Marr denies ‘getting party political’ as he makes impassioned Christmas homelessness plea

Andrew Marr denied he was getting ‘party political’ today when he made a passionate plea urging the country to do more in combatting the homelessness epidemic sweeping the nation.

During The Andrew Marr Show the former BBC political editor and television presenter urged the UK government to do more in helping those sleeping rough on the streets in the run up to the festive period.

His comments follow a damning UN report on poverty in Britain released earlier this month which condemned the UK government’s spending cuts and its treatment of the most vulnerable in society who were allegedly treated as an ‘afterthought’.

Opening his show Marr said: ‘Today is the first day of advent. It ought to be a time when we’re reflecting on those worse off than ourselves.

‘And after a withering controversial UN report on poverty in Britain it is hard to avoid the subject.

‘I am not getting party political but if we don’t notice the rough sleepers all around us at this time of year as the sleet comes down and the Christmas lights go up then there is something deeply wrong with us.’

Some viewers shared their support for Marr’s outspoken comments and for shedding light on the matter while others thought he had crossed a line.

Peter Stefanovic wrote: ‘When Andrew Marr begins his show saying ‘I’m not getting party political but if we don’t notice the rough sleepers all around us at this time of year there’s something wrong with us’ you know the country has hit a tipping point.’ 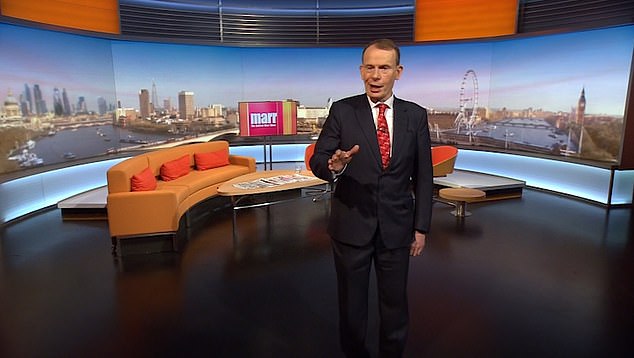 Andrew Marr, pictured on his show, denied he was getting ‘party political’ today when he made a passionate plea to take notice of homelessness in the run-up to Christmas

‘There is not a free market in housing or any social housing policy but trillions of tax payer monies robbed to pour into crony schemes like buy-to-let, HTB, bank bailouts and quantative easing.’

But Chris Shaw said he had watched Andrew Marr ‘actually “getting party political”, this morning, despite denying he is…’

The report by UN rapporteur Professor Philip Alston warned the UK Government’s drastic cuts was leading to an increased level of poverty and causing misery for the poorest in the country.

During his 12-day visit to the country Mr Alston said: ‘The United Kingdom’s impending exit from the European Union poses particular risks for people in poverty, but the government appears to be treating this as an afterthought.’

According to the report there are currently 14 million people, a fifth of the population, in the UK living in poverty.