Amber Rudd has warned the next prime minister they will have to compromise on Brexit to get a better deal from Brussels as she said the negotiating red lines of Boris Johnson and Jeremy Hunt ‘will collide with reality’.

The Work and Pensions Secretary suggested whoever wins the Tory leadership race will have to rethink their demand to delete the Irish backstop from the divorce agreement.

Both Mr Johnson – the prohibitive favourite to take over from Theresa May – and Mr Hunt have insisted the border protocol is ‘dead’.

But new EU chief Ursula von der Leyen, who was narrowly elected as the next president of the European Commission yesterday, said the terms of the Withdrawal Agreement cannot be renegotiated as she stuck to the bloc’s long-held position.

With Brussels adamant the divorce deal cannot be changed and both PM candidates refusing to countenance striking an accord with the backstop still in it, the prospect of a No Deal Brexit appears increasingly likely. 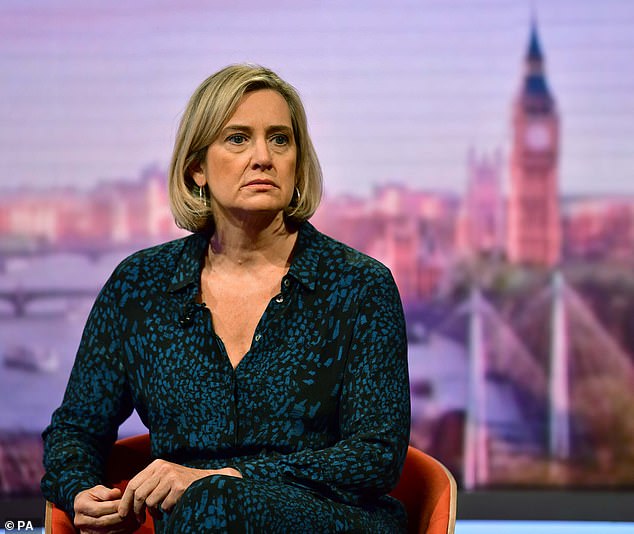 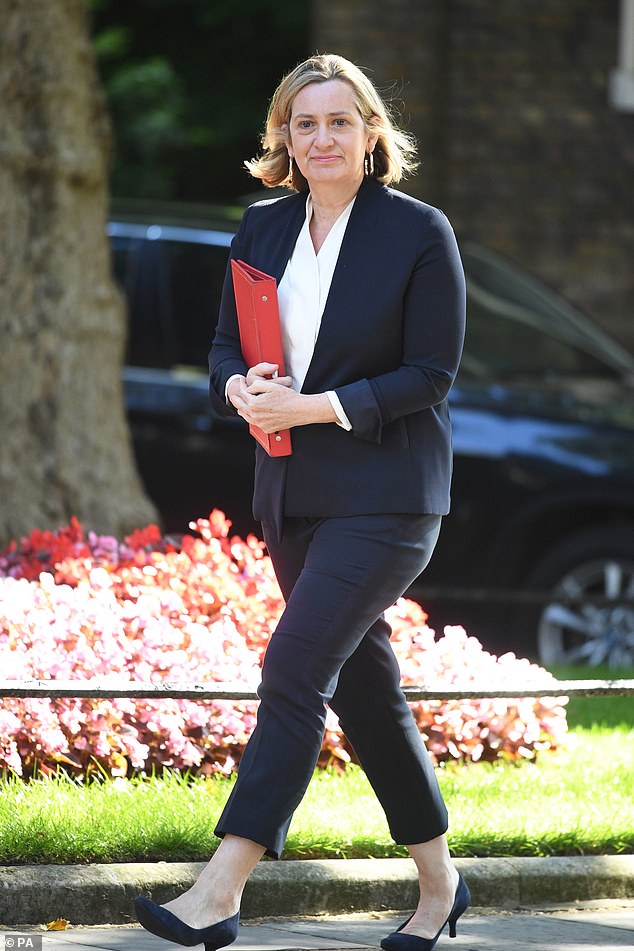 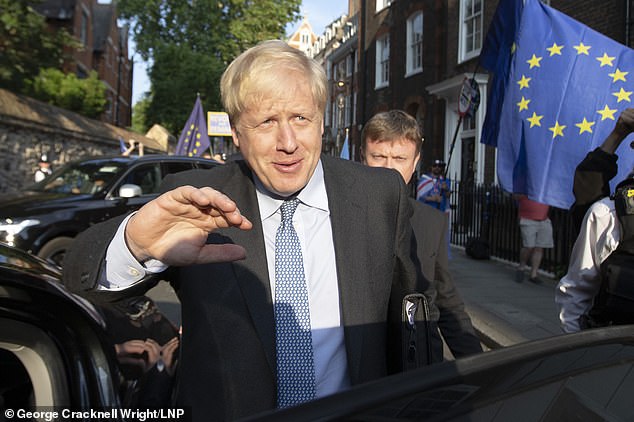 Ms Rudd said she believed Mr Johnson or Mr Hunt will have to dial back their demands when one of them is handed the keys to Downing Street next week if a new deal is to be agreed with the EU.

She also said the next PM will be forced to back down over their Brexit demands because MPs will ‘find a way’ to stop the UK leaving the EU without an agreement.

She told Politico: ‘I think they will find that they have to compromise.

‘I was surprised by what they both said [about the backstop], and I think that their views will collide with the reality when whichever one wins starts negotiating — and starts dealing with parliament, which may be more difficult than they think to engage with.’

On the prospect of Parliament blocking No Deal, the Work and Pensions Secretary said: ‘It is not a certainty, but I think the likelihood is that parliament will find a way.

‘It is a fantastic thing, our parliament… I think that there will be a way, yes, but I can’t be sure.’

Yesterday it was claimed Mr Johnson was considering suspending parliament in the two weeks before October 31 to stop MPs trying to launch a last minute bid to thwart a No Deal.

Sources close to the former foreign secretary downplayed the suggestion as Remainer MPs warned proroguing parliament would be a ‘kamikaze act’ which could spark an early election.

Ms Rudd’s comments are likely to raise eyebrows in Team Johnson because they come just days after she made a desperate bid to keep her Cabinet job under the new administration by weakening her opposition to a disorderly divorce.

She was previously one of the strongest Remainers in the government but at the weekend she changed tack and said she would not ‘lie down in front of bulldozers’ to stop No Deal.

What is the Irish backstop and why is it so divisive?

The so-called Irish border backstop is one of the most controversial parts of the existing Brexit deal. This is what it means:

What is the backstop?

The backstop was invented to meet promises to keep open the border between Ireland and Northern Ireland even if there is no comprehensive UK-EU trade deal.

The divorce deal says it will kick in automatically at the end of the Brexit transition period if that deal is not in place.

This means many EU laws will keep being imposed on the UK, restricting its ability to do its own trade deals. It also means regulatory checks on some goods crossing the Irish Sea.

Why have Ireland and the EU demanded it?

Because the UK is leaving the customs union and single market, the EU said it needed guarantees that people and goods circulating inside its border – in this case in Ireland – met its rules.

This is covered by the Brexit transition, which effectively maintains the status quo, and can in theory be done in the comprehensive EU-UK trade deal.

But the EU said there had to be a backstop to cover what happens in any gap between the transition and final deal.

Why do critics hate it?

Because Britain cannot decide when to leave the backstop.

Getting out – even if there is a trade deal – can only happen if both sides agree and Brexiteers fear the EU will unreasonably demand the backstop continues so EU law continues to apply in Northern Ireland.

Northern Ireland MPs also hate the regulatory border in the Irish Sea, insisting it unreasonably carves up the United Kingdom.

Mr Johnson has made clear that he will only allow people who back the option of leaving the EU without an agreement to serve in his top team.

Ms Rudd last night defended her decision to shift her position as she said ‘anything you do in politics, people will judge you’.

Mr Johnson has vowed to deliver Brexit ‘do or die’ and with or without a deal by October 31.

Mr Hunt has also kept the option of a No Deal on the table but has said he would delay Brexit beyond Halloween if an agreement with the EU was close.

Both men appeared to harden their stance on the thorny issue of the backstop on Monday night as they took part in the final head to head showdown of the leadership contest.

Asked if he could accept a time limit on the backstop, Mr Johnson said: ‘The answer is no. The problem is really fundamental. It needs to come out.’

Mr Hunt agreed and said the ‘backstop, as it is, is dead’ and added: ‘I don’t think tweaking it with a time limit will do the trick.’

The backstop was included in the original Brexit deal as a last resort measure to be used in the event no overall trade deal has been struck by the two sides by the end of the transition period.

It would effectively see existing EU rules on customs kept in place to ensure frictionless trade on the island of Ireland could continue and prevent the return of a hard border.

But Brexiteers hate it because if implemented it would last indefinitely, restrict the UK’s ability to strike its own trade deal and getting out of it would require the agreement of both sides.

Mrs von der Leyen yesterday became the president-elect of the European Commission after winning a vote on her appointment in the European Parliament by 383 votes to 327 – nine votes more than the absolute majority of 374 MEPs she needed.

She will replace Jean-Claude Juncker in the role on November 1 – the day after Brexit.

She used a speech to MEPs before they voted to make clear the current Brexit divorce deal will not be up for renegotiation with the new British prime minister.

She also firmly committed to the backstop as she set the bloc on a collision course with Mr Johnson and Mr Hunt.

She said: ‘The Withdrawal Agreement concluded with the government of the UK provides certainty where Brexit created uncertainty. 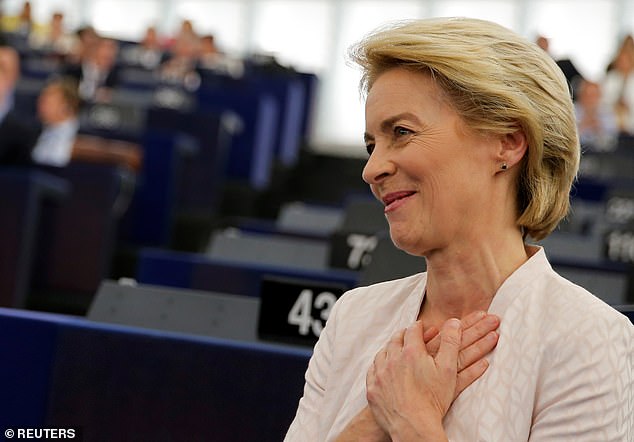 Ursula von der Leyen, pictured yesterday as she responded to the vote on her appointment in Strabsourg, has stressed the Withdrawal Agreement cannot be changed

‘In preserving the rights of citizens and in preserving peace and stability on the island of Ireland, these two priorities are mine too.’

Mrs von der Leyen also said she was ‘ready’ to agree a further Brexit delay but only for a ‘good reason’ like a general election or a second referendum to break the impasse.

Speaking after the result of the vote was announced, the German mother-of-seven who has previously spoken of a desire to create a ‘United States of Europe’ promised to ‘work in a very constructive way’ with Mr Johnson or Mr Hunt.

Nigel Farage, the leader of the Brexit Party, said her election was a ‘stitch up’ but one which would help the cause of leaving the EU.

‘She’s the pin-up girl now for the Brexit movement, if we had a second referendum, she would be on every single leaflet of the Leave campaign,’ he said.