AN AMAZING girl born with her stomach, liver and bowel on the outside of her body has defied the odds.

Laurel Phizacklea, two, was not expected survive birth and her parents were offered a termination at their 12-week scan. 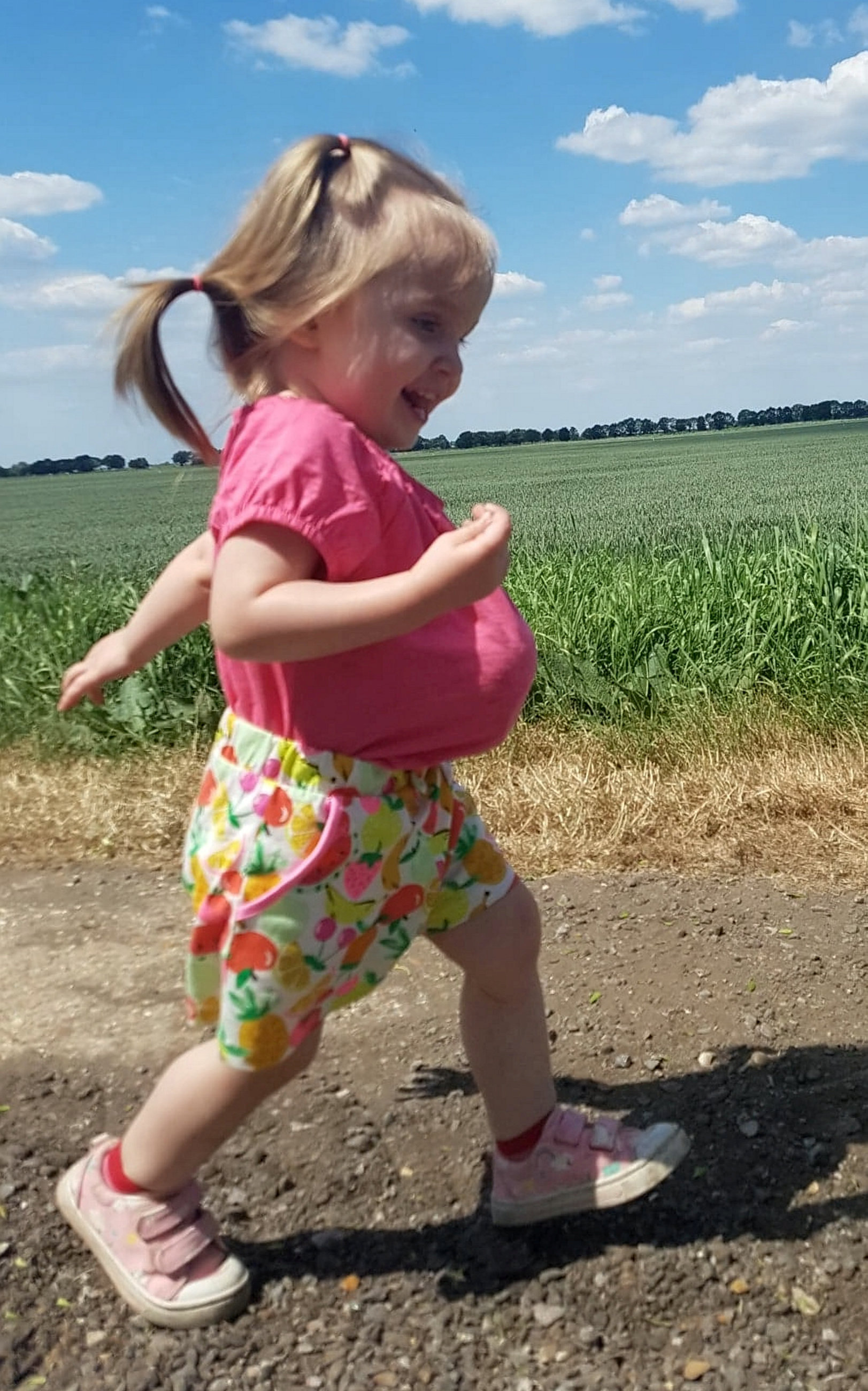 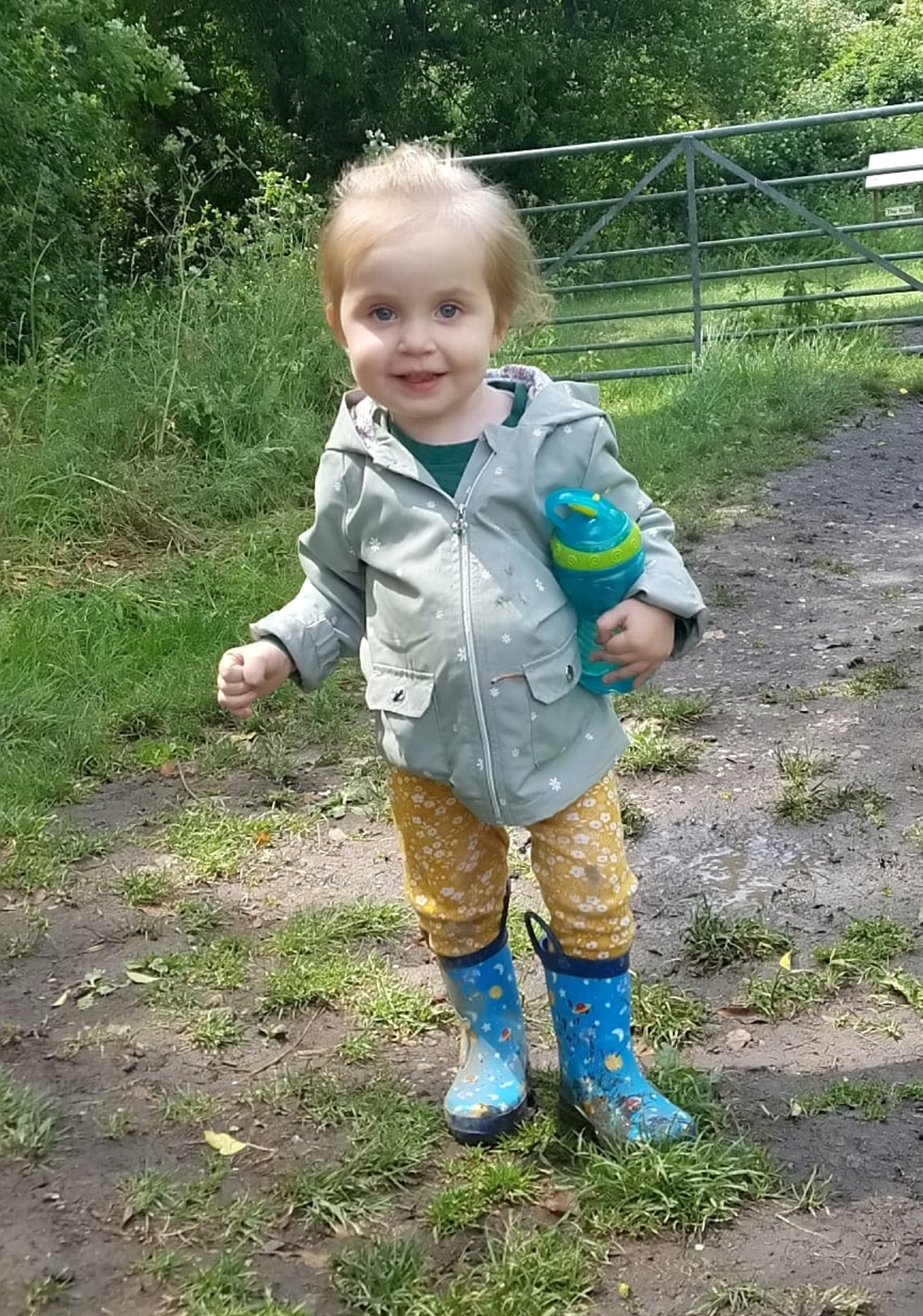 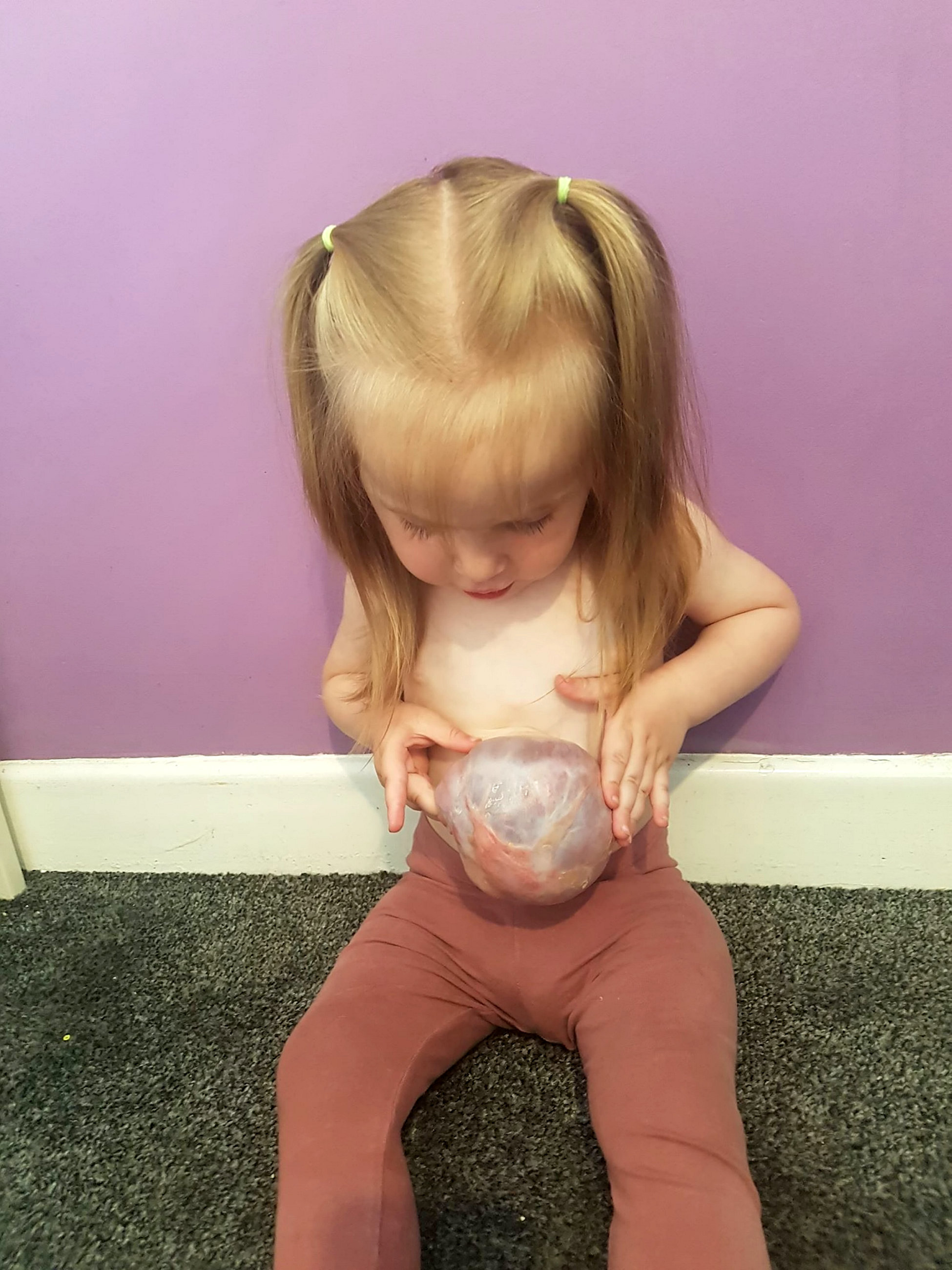 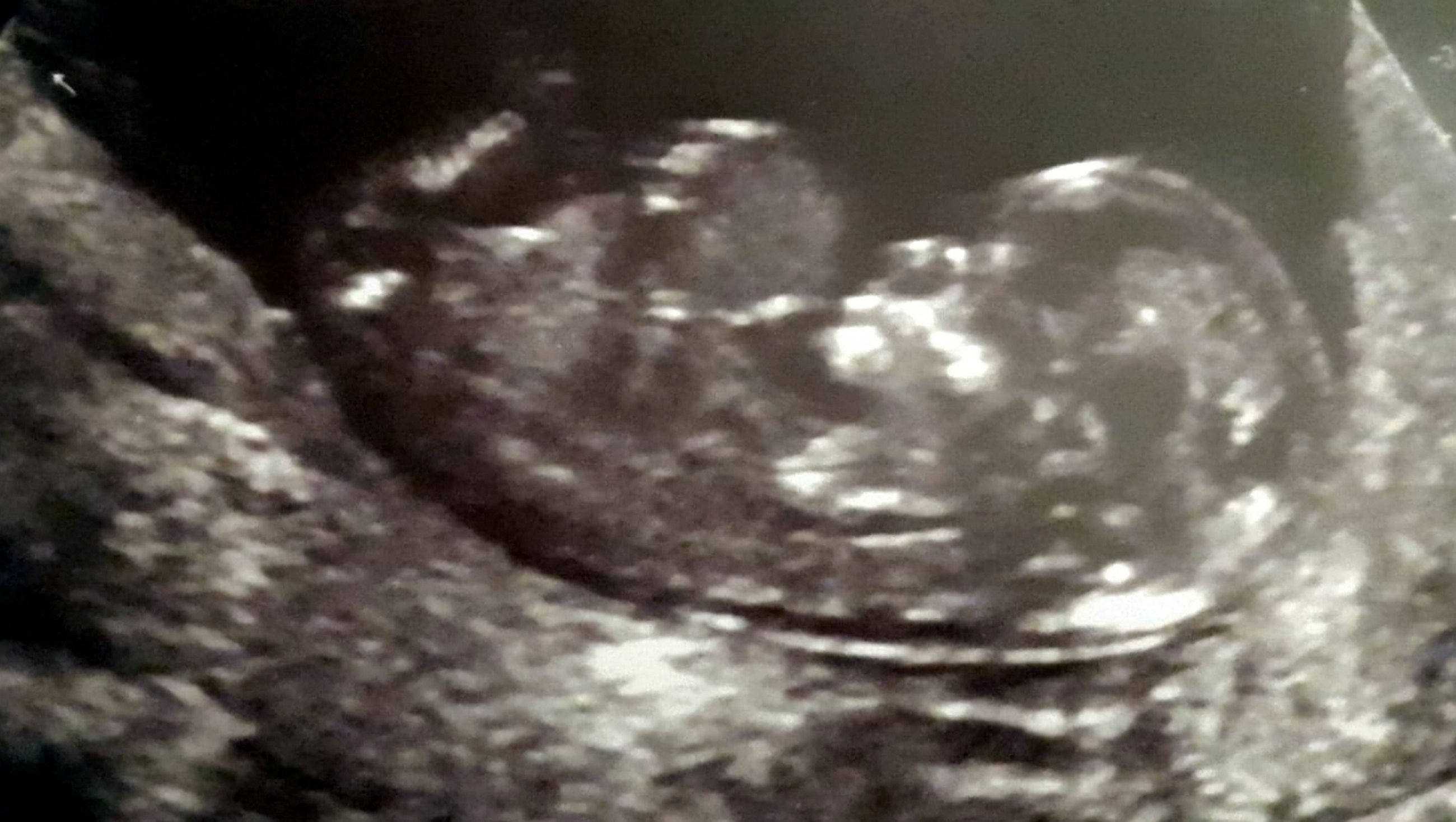 Parents Kelly, 30, and Sean, 34, were told their unborn child had a major exomphalos – a condition which occurs when the baby's abdominal wall does not form during pregnancy.

They decided to go ahead with the pregnancy and their little Laurel was born in Addenbrookes Hospital, Cambridge on June 6, 2018.

The toddler has defied all odds and still lives with stomach, liver and bowel outside her body.

Most babies with her condition have the organs reinserted in their body at birth, but because her exomphalos is unusually large doctors said they can't internalise them until she is three.

Laurel was left with a protruding bump on her tiny tummy.

Her parents keep it wrapped in bandages to support the external organs and to prevent the weight of them pulling anything else out of her body.

Skin has since formed around the organs.

Laurel can eat, drink and go to the toilet like any other toddler, but her parents need to make sure no injuries come to her exomphalos.

The little tot has even grown to love her tummy.

Mum Kelly, a volunteer supporting parents in neonatal care, said: "She loves her tummy so much.

"She rubs it in the bath when I take the dressing off to wash her and says 'ah tummy'.

"It's very cute, and she couldn't be prouder of it. But I do worry about how she'll react when it's not there anymore."

Early in all pregnancies, the intestine develops inside the umbilical cord and then usually moves inside the abdomen a few weeks later.

In exomphalos, the intestines – and in this case the stomach, liver and bowel – remain inside the umbilical cord but outside the abdomen.

Kelly said: "I don't know how we remained positive throughout my pregnancy with Laurel.

"It really looked as if she wouldn't survive birth – but Sean and I never gave up hope and she has done us so proud.

"Her pouch of organs on her tummy is a part of her and she doesn't let it get her down.

"Laurel is a true inspiration and amazes us every day."

We knew it was far from the end of it – but to hear her cry was a huge relief and from that moment we knew she was a fighter.

Doctors also determined the baby had a spinal deformity – and the pair were offered a termination.

Kelly said she was shocked they were offered an abortion at her 12-week scan.

She said: "We couldn't quite believe what we were hearing when they offered us an abortion.

"People kept saying: 'It's OK, you can try again' – but I didn't want another baby.

"I was so in love with this baby and we knew we would do everything we could for her."

The continued on with the pregnancy and went for scans every two weeks – and because the presence of exomphalos signal an 80 per cent chance of other birth abnormalities the mum underwent further tests.

Those tests highlighted their unborn child also had a hole in the heart.

Three weeks before Laurel’s birth, doctors also discovered the exomphalos had doubled in size – prompting doctors to give the devastating news that the baby would not survive childbirth.

Kelly said: "Although I knew it was very real and incredibly scary, part of me always thought: 'This won't happen to me, I won't let it'."

Surgeons performed a classic caesarean – meaning they cut vertically on Kelly's stomach as opposed to horizontally.

She said: "When we heard her cry out I couldn't believe it. Both Sean and I just burst into tears.

"We knew it was far from the end of it – but to hear her cry was a huge relief and from that moment we knew she was a fighter."

Laurel was born weighing a healthy 7lb 5oz, and put straight on a ventilator before being transferred to NICU.

She was able to come home after three-and-a-half months.

Laurel will soon have the operation to have her organs internalised at the beginning of 2021 and she will have to "learn how to breathe again".

Laurel will undergo the operation at King's College Hospital, London.

Kelly said: "It is a scary thought, and there are definitely concerns.

"But Laurel has already been through so much, and I am sure she will continue to take everything in her stride."

Exomphalos is when when the baby's abdominal wall does not form during pregnancy.

Early in all pregnancies, the intestine develops inside the umbilical cord and then usually moves inside the abdomen a few weeks later.

In exomphalos, the intestines remain inside the umbilical cord but outside the abdomen.

The abdominal cavity often does not develop properly and remains small in size. 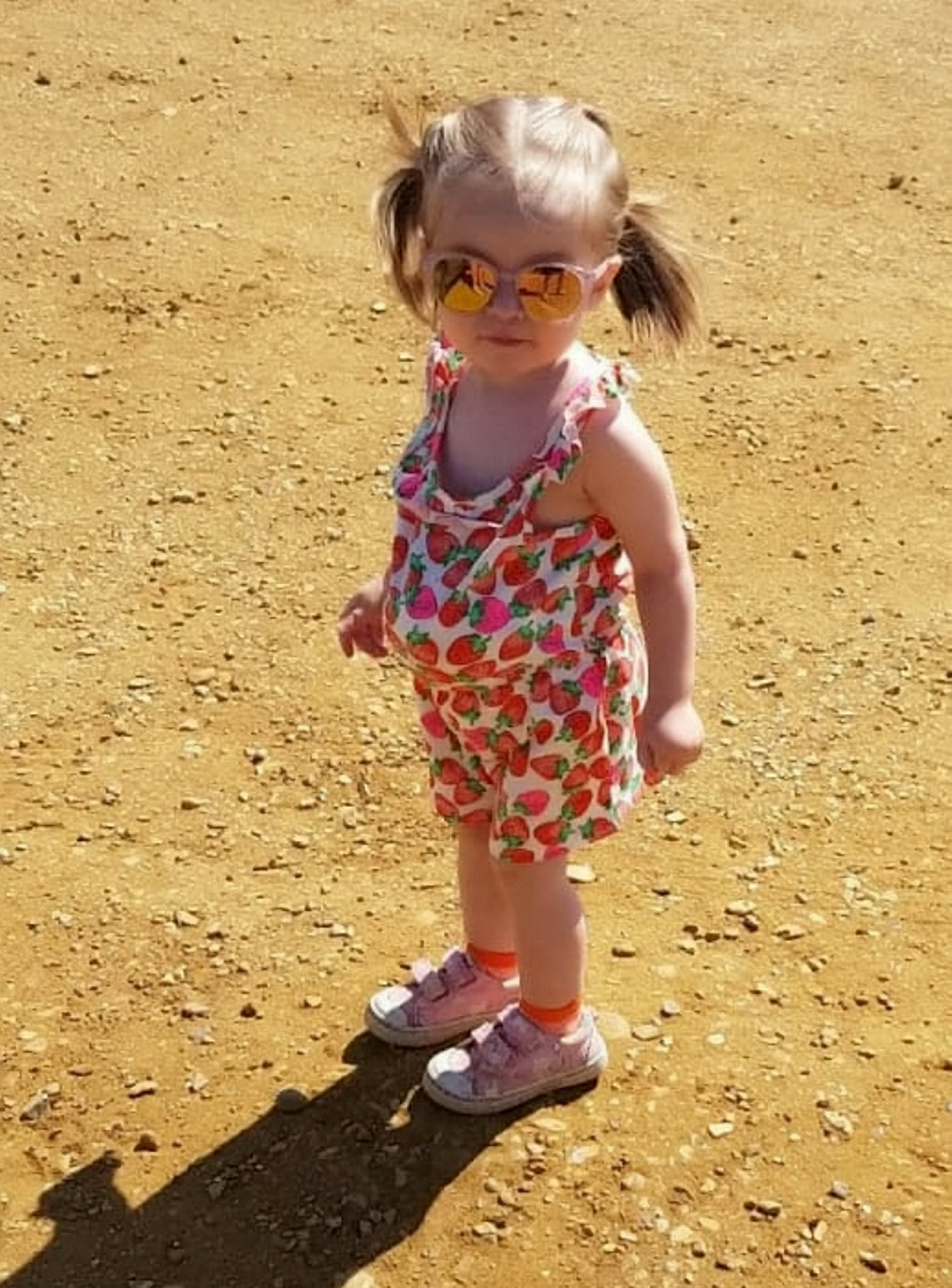 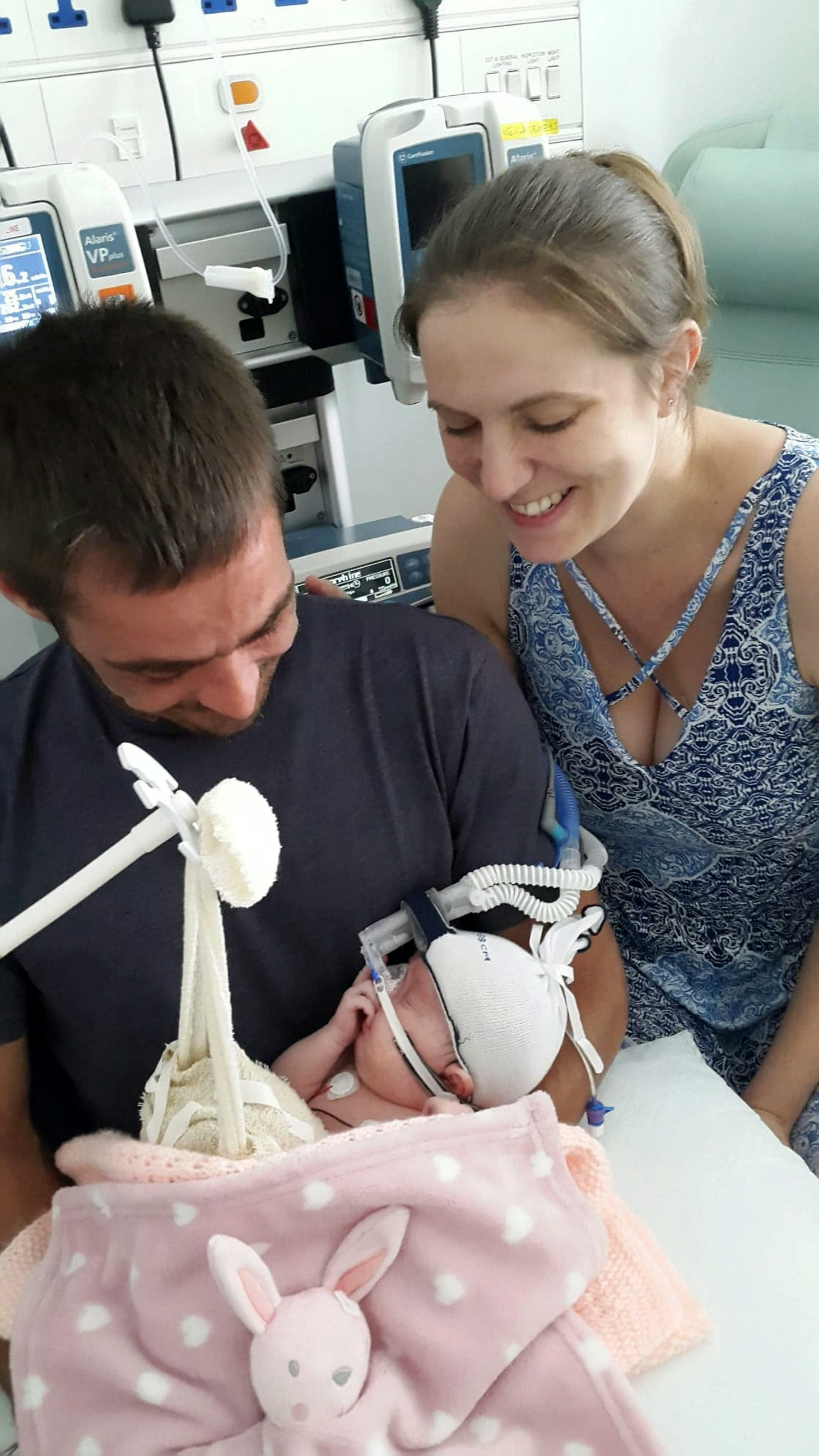