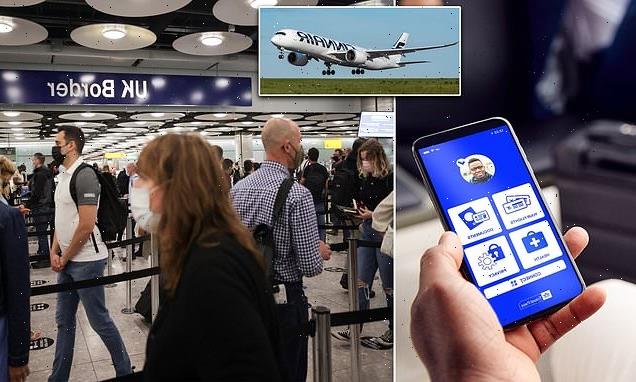 All-in-one ‘travel pass’ that puts your passport, Covid tests and entry forms on your phone is trialled at Heathrow in a bid to slash border control queues

An all-in-one ‘travel pass’ that could be used to slash border hall queues for holidaymakers is being trialed at Heathrow Airport.

The International Air Transport Association (IATA), the trade body for airlines, is trialing its new ‘Travel Pass’ mobile app on flights between the London-based airport and Helsinki.

The app allows travellers to put a digital version of their passport, along with their Covid test results and their entry requirements in one place so they can be easily checked.

Other similar apps, such as Verifly, have been used and promoted, including by the likes of BA, as a way for passengers to check entry requirements and input tests results ahead of travel.

But the IATA’s app has drawn particular interest because of the digitalised passport function.

The Government says it is monitoring the three-week trial, which will be rolled out on the Finnair flights between Heathrow and Helsinki Airport between now and mid-August. 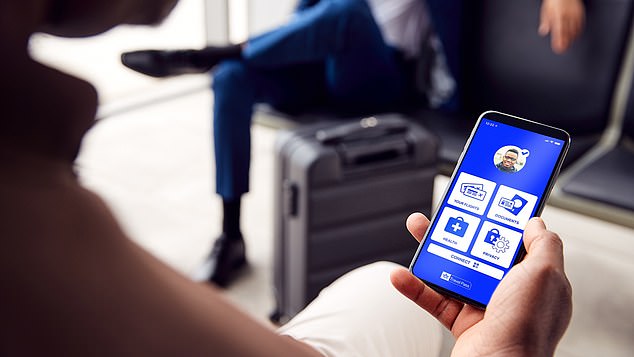 The International Air Transport Association (IATA), the trade body for airlines, is trialing its new ‘Travel Pass’ app (pictured) on flights between the London-based airport and Helsinki 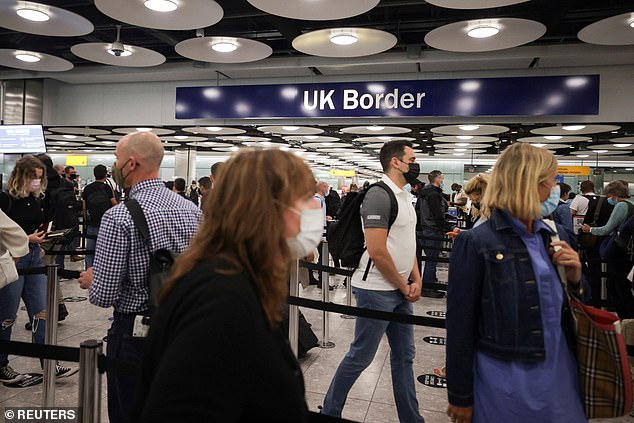 ‘They have also severely contributed to ever-present anxieties for travelers across the whole aviation sector.

‘The industry is in need for current protocols to be replaced with more effective, digital solutions to simplify coronavirus travel procedures.’

IATA says the app allows travellers to receive, store and manage any verified COVID-19 certificates securely ahead of their flight.

Bosses of the trade board say they hope, in the future, the app will enable customers to navigate their way through airports and board their flight more quickly and efficiently.

‘It will do this by ensuring customers avoid the additional burden of travel document hassle – providing a smoother customer experience for regular travelers,’ say the IATA.

During the trial, the Finnish carrier will collect feedback from customers and crew to help the app’s future development.

Speaking about the plans, a Government spokesperson told MailOnline: ‘The Global Travel Taskforce continues to review how we safely restart international travel while managing the risk from imported cases and variants. 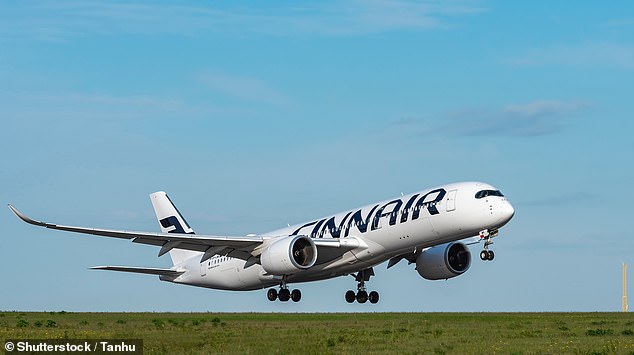 During the trial, the Finnish carrier (pictured: A Finnair plane) will collect feedback from customers and crew to help the app’s future development

‘We are constantly exploring how new technology can support these aims and look forward to hearing about the conclusion of the trials.’

Alongside Finnair, the IATA app, which is available on the Apple App Store and Google Play is being trialled on other carriers, including BA, Virgin Atlantic, Emirates and Etihad.

In March the IATA teamed up with Singapore Airlines for flights from Singapore to Heathrow.

‘It (the app) gives travellers a one-stop-shop to help them comply with the new rules for travel. It shows that governments can efficiently manage these travel requirements with complete confidence in the identity of the passenger and the veracity of the travel credentials—importantly, avoiding long queues.’

Heathrow Airport is to introduce a £5 passenger drop-off charge outside its terminals – as it desperately attempts to claw back more than £2billion in pandemic losses.

The new charge will be brought in from October and will apply to all vehicles – including taxis and private hire cars – entering the forecourt areas outside the airport’s terminals.

The fee must be paid online or over the phone, with number plate reading cameras, instead of barriers, being used to enforce the charge.

Heathrow chiefs say the move, which brings the airport’s policy in line with the likes of Gatwick and Manchester, who also have £5 drop-off charges, is aimed at ‘improving air quality and reducing congestion’.

Bosses also admit the money will help the airport recover after losing around £5million-a-day throughout the Covid pandemic.

However the move is likely to be another headache for holidaymakers hoping for a stress-relieving getaway after months of Covid cancellations and confusion.

Meanwhile taxi unions have rallied against the move, urging its drivers should be exempt from the charge.

Announcing the decision, which comes after the launch of a review in December last year, Heathrow bosses said: ‘From October, Heathrow will be introducing a charge for vehicles dropping off passengers at its terminal forecourts. 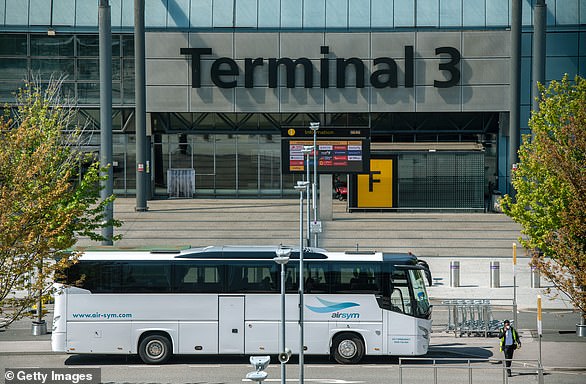 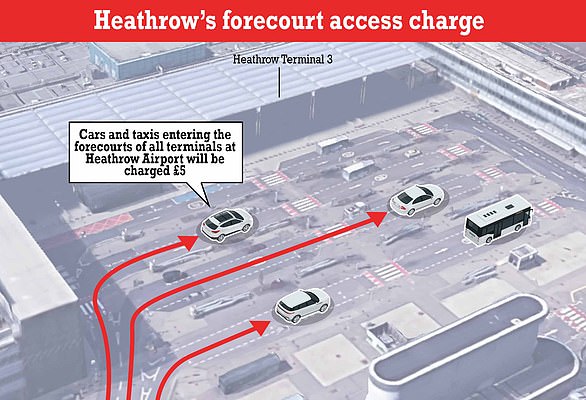 ‘We have always said that we would consider introducing a form of road user charging and several other approaches to improve air quality and reduce congestion at Heathrow.

‘We updated these plans after reviews were conducted of all airport projects in light of the collapse in passenger numbers experienced at Heathrow due to the impacts of the pandemic and the subsequent loss of £5million a day.’ 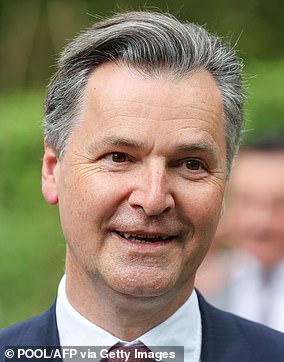 Heathrow bosses (pictured: CEO John Holland-Kaye) say the £5 charge is less than the up to £15 fee it had planned to charge under its ‘Heathrow Vehicle Access Charge ‘HVAC’ plan

The charge will apply to all vehicles entering the drop-off forecourts of Heathrow’s terminals – though blue badge holders and emergency vehicles will be exempt.

Heathrow chiefs say the areas will be marked up with ‘clear signage’ on roads in and around the airport to ‘ensure drivers are fully aware’ of chargeable areas.

The charge zones will be enforced using Automatic Number Plate Recognition (ANPR) cameras, with the charge being paid online, via mobile phone or an automated telephone service.

Parking fines will be handed out to those who do not pay the charge, Heathrow bosses warned.

But the move has today been criticised by taxi unions, who warn it could inflict further damage on an industry which has already been hit badly by the Covid pandemic.

Dave Lawrie from the National Private Hire and Taxi Association said he understood why airports implement such charges, and that others already had similar schemes in place.

But, speaking to MailOnline, he said: ‘With the Covid situation, I think our industry should be exempt.’ 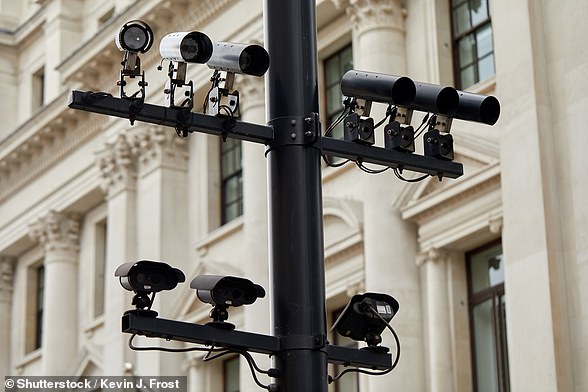 The charge zones will be enforced using Automatic Number Plate Recognition (ANPR) cameras (like those pictured here), with the charge being paid online, via mobile phone or an automated telephone service

Mr Lawrie said the charge would be passed on to customers – which could drive business away from taxi and private hire vehicles.

Heathrow bosses meanwhile say the £5 charge is less than the up to £15 fee it had planned to charge under its ‘Heathrow Vehicle Access Charge ‘HVAC’ plan.

Airport bosses say they had hoped to introduce the charge, of between £10-15, ahead of the opening of its third runway, along with a Heathrow Ultra-Low Emissions Zone (HULEZ) by 2022.

However they say the £5 drop-off charge replaces these proposals.

Airport chiefs say the car parks will continue to operate as normal and that a free drop off option remains at its long stay car parks, where passengers can take a free bus transfer to the terminal.

Heathrow said: ‘This move will not impact passenger pick up, which should continue via the car parks, as picking up passengers is not permitted on the terminal forecourts.

‘More details on the scheme, registering your vehicle, and making payments will be published in due course,’ the airport said in a statement.

The move comes after Gatwick Airport introduced a drop-off charge at its terminals earlier this year.

Manchester Airport introduced a similar charge in 2018 and has since increased its prices from £3 to £5 for five minutes, with ten minutes costing £6 and more than ten minutes attracting a staggering £25 charge.