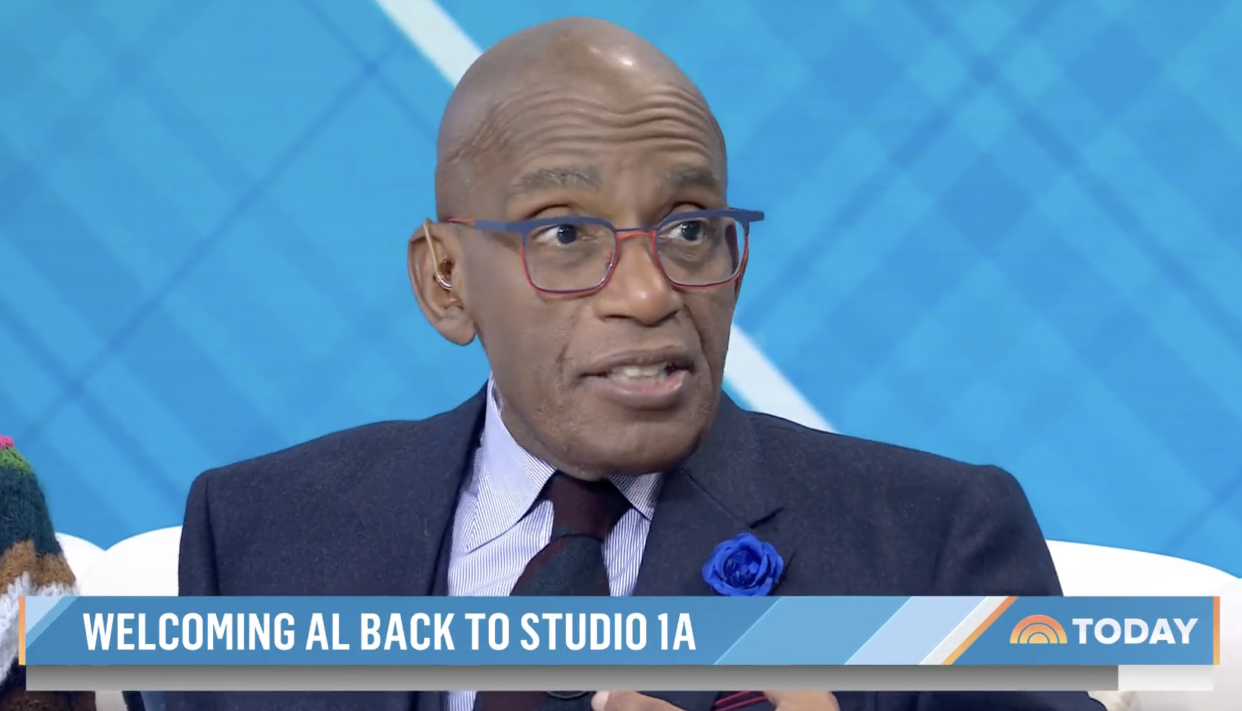 Al Roker has returned to the Today show after a life-threatening health battle.

The weather anchor, who has been off the air for more than two months as he recovered from to back-to-back hospitalizations as he coped with blood clots and internal bleeding that necessitated major surgery, was greeted by his colleagues Hoda Kotb and Savannah Guthrie as soon as he arrived at NBC's Studio 1A in 30 Rockefeller Plaza on Friday.

"Yes!" shouted Kotb in the clip as Roker, 68, stepped off the elevator in a full suit and hat accompanied by his wife, ABC News's Deborah Roberts. "You are home," Guthrie told him.

It’s been a warm welcome back from the moment Al arrived to studio 1A! pic.twitter.com/bm7SxsfZHJ

At the top of the show, Guthrie said, "It is a really special Friday morning. I'm sorry but the tears are already flowing. Al Roker is back! … To say we have missed you doesn't begin even describe it. It is nothing without you here."

Hotb said the crew was "weepy" and the crowd outside has "been bummed every day we've walked out there" without him. "They're like, 'Where is Al?'" Outside, fans held up a sign spelling out, "Welcome back Al" and held posters with his smiling face on them.

The countdown is finally over. Al is back in studio with us for the first time in more than two months! 😭❤️ pic.twitter.com/rvPbuxCcEf

Roker called everyone behind the show his "second family" and said "it's great to be back — and wearing pants" after a month-long hospitalization followed by recovery at home. He said his heart was "just bursting" as his colleagues pulled out all the stops, including welcoming him with his hype music, the A-Team theme song.

Roker's sense of humor, a constant since he joined the show in 1996, was turned on even if he admitted he was running on adrenaline. Later in the show, when Carson Daly made a joke about Kotb using Roker's dressing room as additional closet space while he was gone, Roker shot back, "Actually, they'd already cleared them out. [But] I am wearing her Spanx right now. These are fantastic!"

Roker's health journey was discussed in detail in later segments. He first suffered from stomach pains but it escalated and, among issues, he had blood clots in his lungs, which doctors suspect stemmed from him having COVID in September. However, that was coupled with the complication of mysterious internal bleeding which necessitated surgery and revealed two bleeding ulcers. He also had colon resection surgery, when part or all of the colon is removed, and had his gallbladder removed.

We’re taking a closer look at the health journey Al and his wife Deborah have been on, and taking you inside his recovery. pic.twitter.com/CNQ1JpgnK4

Roker said, "I lost half my blood" amid the illness and recovered in a surgical ICU.

Roker's gastroenterologist, Felice H. Schnoll-Sussman, described herself as "extraordinarily concerned. He had a life-threatening experience. There is no doubt about that." Roker credited her, his internal medicine specialist Jay Raman and the rest of his medical team for "saving his life."

As far as his health going forward, Schnoll-Sussman said at this point he needs needs TLC — through time, good food, rest and being with loved ones.

Roker's family, including his wife and three children, were by his side as he recovered. Roberts, from rival ABC News, joined them on the show to talk about helping Roker get back on his feet.

When Kotb pointed out that people probably didn't realize how dire Roker's situation was and that he had to be "saved," Roberts said, "It's not lost on us that this is a major, major thing for Al to be here. He is a living, breathing miracle. He really is. I'm not overstating it, I don't think. Al was a very, very, very sick man and I think most people did not know that."

Roberts revealed that Roker's condition was "a medical mystery for a couple of weeks," going through tests, scopes before the "major, major surgery."

"It was the most tumultuous, frightening journey we have ever been on," she admitted.

Roberts said her first sign that things would be OK was when a "gaunt and exhausted" Roker, who barely had any voice, whispered to her her from his hospital bed, "I'm going to make a spatchcock turkey for Christmas," she recalled with a laugh.

"That was the moment for me… I'm sitting here hoping he's going to make it to Christmas and he wants to make a turkey," she laughed. "I just knew at that point — that will, that drive."

Roker praised his wife and family for helping him get through it. "I had no idea how bad off I was," he admitted, saying Roberts shielded him from that. 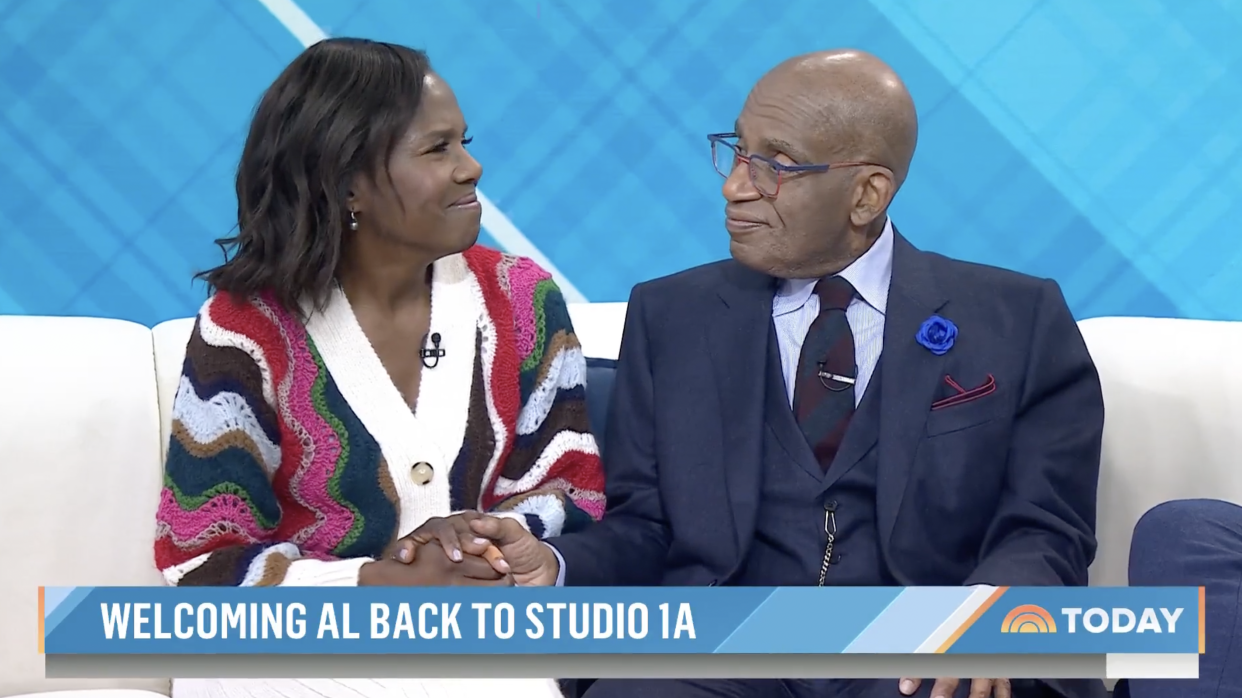 "I'm grateful to have this woman by my side, all of you and you folks at home," he said. "The prayer, you could feel it."

Roker added his doctors told him if that he wasn't in the shape that he was in, as he documents his daily walks on the show's Start Today, "this might have been a different outcome."

Roker hasn't been on air since November. He missed his first Macy’s Thanksgiving Day parade in two decades as well as the lighting of the Christmas tree at Rockefeller Center. A sweet moment was the Today show anchors and staff going to his home to serenade him with Christmas music.

Roker was diagnosed with prostate cancer in 2020. He had his prostate removed as well as surgeries to fix issues with his hip and knees. He also had gastric bypass surgery in 2002.