Al-Qaida leader Ayman al-Zawahri calls for Muslims to attack U.S., European, Israeli and Russian targets in a speech on the 18th anniversary of the 9/11 terror attacks 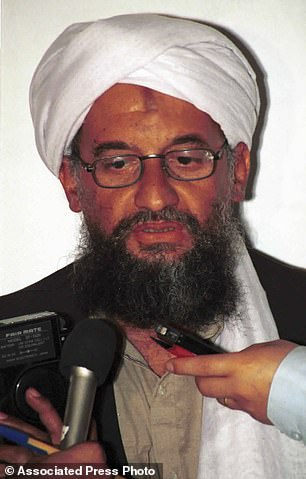 Ayman al-Zawahri, 68, (pictured in 1998) said in a video today that Muslims should attack U.S., European, Israeli and Russian targets

The leader of Al-Qaida today called on Muslims to attack U.S., European, Israeli and Russian targets in a speech on the 18th anniversary of the 9/11 terror attacks.

Ayman al-Zawahri, 68, said the American military ‘has a presence all over the world’ spreading corruption and that countries had been ‘littered’ with their bases.

He also criticised ‘backtrackers’ from jihad, slamming them for changing their views on the 9/11 attacks in prison – angry that they now thought them unacceptable because innocent civilians were harmed.

His speech was revealed by SITE Intelligence Group, which tracks online activity of jihadist groups and found video of the militant leader’s speech.

‘If you want Jihad to be focused solely on military targets, the American military has presence all over the world, from the East to the West,’ he said. ‘Your countries are littered with American bases, with all the infidels therein and the corruption they spread.’

The coordinated al-Qaida hijackings on Sept. 11, 2001 killed nearly 3,000 people, when airliners slammed into the World Trade Center and the Pentagon and another crashed in rural Pennsylvania.

Al-Zawahri’s speech was recorded in a 33-minute, 28-second video produced by the group’s as-Sahab Media Foundation.

As an indicator of when the speech may have been recorded, al-Zawahri references President Donald Trump’s recognition of the Golan Heights as Israeli territory, which was announced on March 25. He calls on Palestinians to seek ‘martyrdom’ by attacking Israelis with a suicide vest in response. 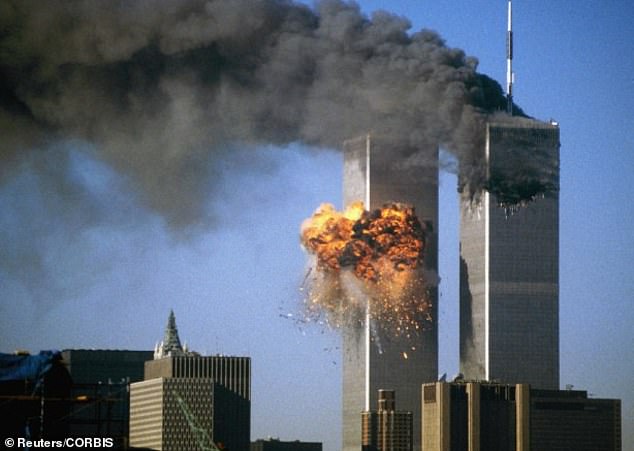 The World Trade Center south tower (left) burst into flames after being struck by hijacked United Airlines Flight 175 as the north tower burns following an earlier attack by a hijacked airliner in New York City on September 11, 2001

Al-Zawahri, an Egyptian, became leader of al-Qaida following the 2011 killing of Osama bin Laden in Abbottabad, Pakistan by U.S. Navy SEALs. He is believed to be hiding somewhere in the Afghanistan-Pakistan border regions. A July report by the U.N. cited reports that he is ‘in poor health’ but provided no details.

His speech came as Donald Trump observed an emotional moment of silence and recalled his horror watching the second plane hit the World Trade Center in the 9/11 attacks.

Thousands across the nation gathered for remembrance ceremonies on the 18th anniversary of the tragedy that took 2,977 lives and scarred America.

The president and First Lady Melania somberly bowed their heads at the White House South Lawn at 8.46am – the moment Flight 11 struck the north twin tower of the World Trade Center – on Wednesday morning.

Then Trump headed to the Pentagon memorial where he laid a wreath as a U.S. Army officer read the names of the 184 lives lost in the 9/11 attacks there. The president recounted seeing the second of two airliners fly into the World Trade Center from a nearby window. 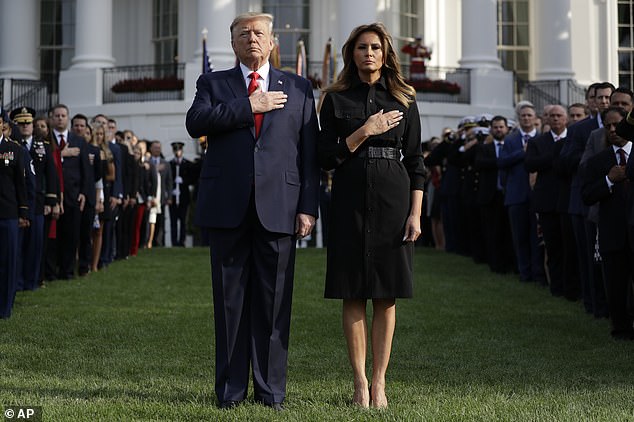 Over recent years, al-Qaida has been engaged in fending off competition in jihadi circles from its rival, the Islamic State group. IS exploded into prominence by seizing large swaths of Iraq and Syria in 2014, declaring a ‘caliphate’ and extending affiliates in multiple countries across the region.

IS’s physical ‘caliphate’ was crushed in Iraq and Syria, though its militants are still active and carrying out attacks.

The U.N. report said the ‘immediate global threat posed by al-Qaida remains unclear’ but warned that some would-be IS recruits could turn to older organization.

Al-Qaida militants, meanwhile, have taken a lower profile, using regional conflicts in Afghanistan, Syria and Yemen to entrench themselves. The Yemen branch has been the most active, exploiting the chaos of the civil war to carry out bombings, shootings and assassinations in an effort to expand its footprint.

Osama bin Laden’s son Hamza bin Laden had been viewed as an eventual heir to the leadership of al-Qaida but was killed in a military operation, U.S. officials have said. Al-Zawahri lauded Hamza in a 2015 video that appeared on jihadi websites, calling him a ‘lion from the den of al-Qaida.’