Lawyers assisting the aged care royal commission have recommended mandated staffing ratios in residential aged care, including the compulsory registration of aged care workers, and a new Aged Care Act that would protect the rights of older people.

After two and half years of hearings that have included appalling tales of neglect of aged care residents, counsel also recommended a new act to protect the human rights of older Australians and proposed replacing the existing regulator with a new and independent Aged Care Commission. 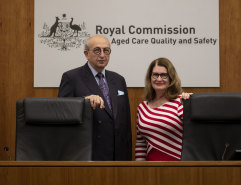 The recommendations are among 124 proposed by senior counsel Peter Gray, QC, and Peter Rozen, QC, assisting the commissioners. They are contained in a 500-page submission to commissioners, Tony Pagone, QC, and Lynelle Briggs. It was made public on Thursday.

Counsel also called for the proposed new Australian Aged Care Commission – and its new commissioner – to be independent of the Aged Care Minister. The Australian Quality and Safety Commission, the existing body, is with the Commonwealth Health Department.

Launching the final two days of hearings before the commission reports in February 2021, Mr Peter Rozen, QC, said the commissioners had a once in a lifetime opportunity to create a better system of care for elderly Australians.

The hallmark of a civilised society was how it treated its "most vulnerable" citizens, he said, quoting the former late commissioner Richard Tracey.

Before outlining the recommendations, Mr Rozen saluted the courage of the 641 witnesses who had shared harrowing stories and the most intimate details of their lives.

Mr Rozen said the commission had heard many disturbing accounts raising allegations of abuse of people living in residential aged care at the hands of caregivers and fellow residents.

One disturbing account came from Sydney's Shannon Ruddock, who travelled to Perth to give evidence a year ago about serious problems with palliative care that caused her father to live in excruciating pain. Her father Vincent Paranthoiene, 81, was diagnosed with terminal cancer – causing pain so bad he begged to be thrown under a bus.

Ms Ruddock drew on her experience of the staffing levels at the hospital and contrasted them to the levels at the aged care facility. She advocated for a rigorous form of accreditation before an aged care home could provide palliative care.

Merle Mitchell, who lives in aged care in Melbourne, told the commission that aged care wasn't home, but a place to live.

While all 124 recommendations were important, Mr Rozen said the most significant were:

Mr Rozen said the commission had heard evidence that the level of substandard care was too high, yet the term was not defined and hard to measure. Until recently there had been a surprising absence of quality indicators in aged care compared with health, which had a long history of measuring quality.

The most important news, analysis and insights delivered to your inbox at the start and end of each day. Sign up to The Sydney Morning Herald’s newsletter here, to The Age’s newsletter here and Brisbane Times‘ here.