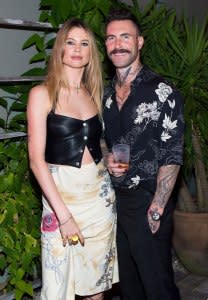 On the same page? Adam Levine and Behati Prinsloo were spotted together for the first time after multiple women claimed the Maroon 5 band member cheated on his wife with them.

Levine, 43, and Prinsloo, 34, were all smiles on Tuesday, September 20, as they picked up their daughters Dusty Rose, 5, and Gio Grace, 4, from school, according to photos obtained by the Daily Mail.

During the outing, the musician appeared to be in a good mood while sporting a simple band shirt and black shorts. The model, for her part, kept it casual with a white T-shirt and sunglasses.

This marks the couple’s first public appearance since an Instagram model named Sumner Stroh alleged that she had an affair with Levine. The internet personality took to TikTok on Monday, September 19, where she shared alleged screenshots from her conversations with the singer.

Levine, for his part, publicly denied cheating on Prinsloo in a social media statement.

“I used poor judgment in speaking with anyone other than my wife in ANY kind of flirtatious manner,” he wrote via Instagram Story on Tuesday. “I did not have an affair, nevertheless, I crossed the line during a regrettable period of my life. In certain instances it became inappropriate. I have addressed that and taken proactive steps to remedy this with my family.” 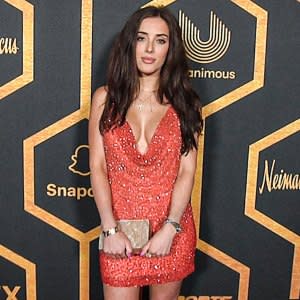 He added: “My wife and my family is all I care about in this world. To be this naive and stupid enough to risk the only thing that truly matters to me was the greatest mistake I could ever make. I will never make it again. I take full responsibility. We will get through it and we will get through it together.”

Stroh, 23, later seemingly addressed the California native’s response, writing via her Instagram Story, “Someone get this man a dictionary.” Since Levine’s denial, multiple other women have come forth with their own allegations that the songwriter was unfaithful with them.

A comedian named Maryka shared her own screenshots on Tuesday from alleged conversations between her and Levine. After she asked if Levine was married, he allegedly responded, “Yeah, but it’s complicated.”

Read articleCelebrity Couples Who Stayed Together After Cheating Scandals

Prinsloo, who has not publicly spoken about the scandal, recently announced that she is expecting her third baby with the former Voice coach. Amid reports that the pair were expanding their family, the Victoria’s Secret model showed off her growing bump in an Instagram selfie.

“Recent ,” she wrote in September 15, alongside a snap of her posing in a cropped T-shirt.