Britain’s liberalism towards same-sex relationships has declined for the first time in nearly 40 years, with experts suggesting levels of tolerance may have peaked.

In 1983 in the UK eight out of 10 people said homosexual relationships were wrong at a time when leaflets about HIV and AIDS were posted through people’s doors warning: ‘Don’t die of ignorance’.

But acceptance of lesbian, gay and bisexual Britons has steadily risen, reaching 68 per cent in 2017. Last year, however, that figure dropped to 66 per cent for the first time.

The British Social Attitudes survey claims religion could be to blame, citing a ‘marked divide between the attitudes of religious and non-religious people’. 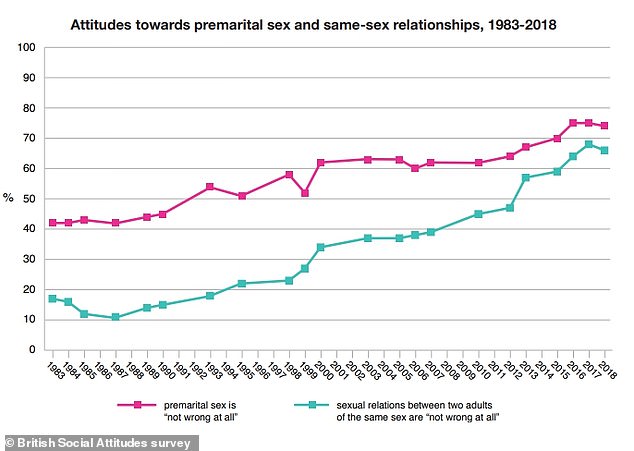 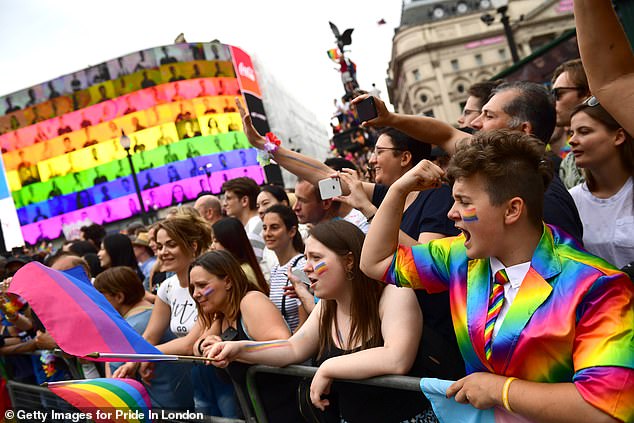 The British Social Attitudes survey has shown liberal attitudes towards same-sex relationships have declined for the first time since the AIDS crisis. Pictured: Pride in London 2019

Fears over the scale of poverty in Britain have risen over the past decade across the political divide.

But, the report said, inequality levels are in reality similar to those in 2008 when the financial downturn struck.

Nearly three-quarters of Labour backers and more than half of Tories thought there was a lot of poverty in 2018.

This was up 28 points for Labour supporters and five points for Tories over the decade.

There was also a class divide with more better-off people thinking poverty levels had risen.

The study, which quizzes 4,000 people and is backed by the government, found there are more people who believe in non-Christian faiths such as Islam, Hinduism, Sikhism and Judaism than previously.

It also revealed fewer people are accepting of sex before marriage than they used to be and there is still ‘some way to go’ on Britain’s views of the transgender community.

Experts claim it is still religion that creates a divide when it comes to premarital sex, with 93 per cent of non-believers having no objection.

In 1983 in the UK eight out of 10 people said homosexual relationships were wrong at a time when leaflets about HIV and AIDS were posted through people’s doors warning: ‘Don’t die of ignorance’ 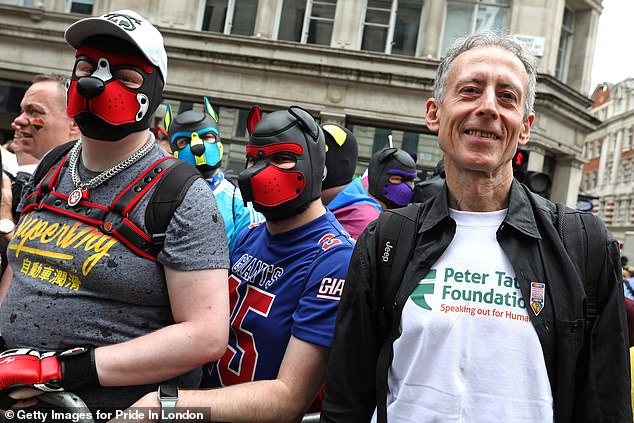 On the other hand, only 66 per cent of Christians and 35 per cent of those subscribing to non-Christian faiths thought likewise.

Britons are more likely to believe in scientists than God, according to the report.

It found that 52 per cent said they have no religion and 21 per cent have no confidence in churches.

Only one in 100 young adults between 18 and 24 regarded themselves as members of the Church of England.

But the number who mistrusted scientists has nearly halved since the 1990s and 85 per cent said they have trust in university scientists.

Meanwhile 16 per cent said they had no confidence in a Parliament mired in Brexit.

But the Christian Institute charity insisted that sex should be between a man and woman in the context of marriage.

They told the newspaper they were concerned about a ‘new orthodoxy that not to celebrate same-sex relations is homophobic’.

Recent clashes between the Muslim community and those supporting LGBT-inclusive sex education lessons in schools point to increased defiance of social liberalism among religious groups in the UK.

The ‘No Outsiders’ programme devised by Birmingham teacher Andrew Moffat has been hugely divisive in the West Midlands, where there is a large Muslim population.

Police were drafted in to calm tensions between Muslim parents, some of whom claim the lessons are ‘brainwashing their children to be gay’, and teachers. 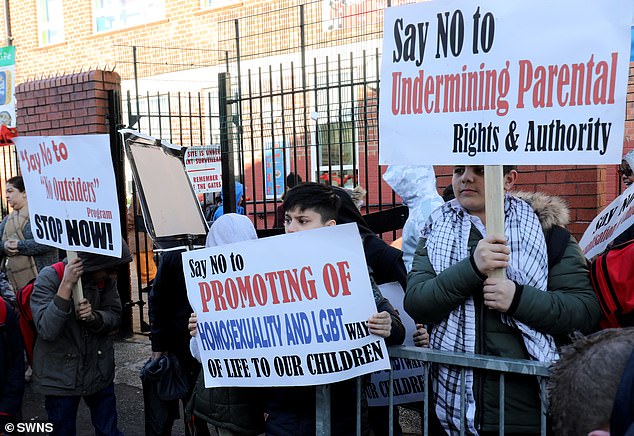 Recent clashes between the Muslim community and those supporting LGBT-inclusive sex education lessons in schools point to increased defiance of social liberalism among religious groups in the UK. Pictured: Protesters outside Parkfield Community School, Birmingham 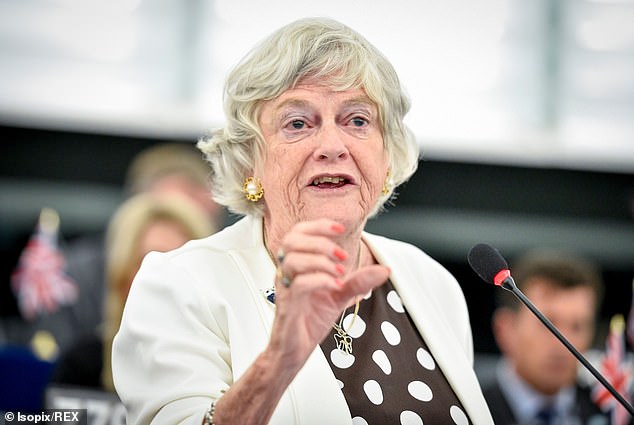 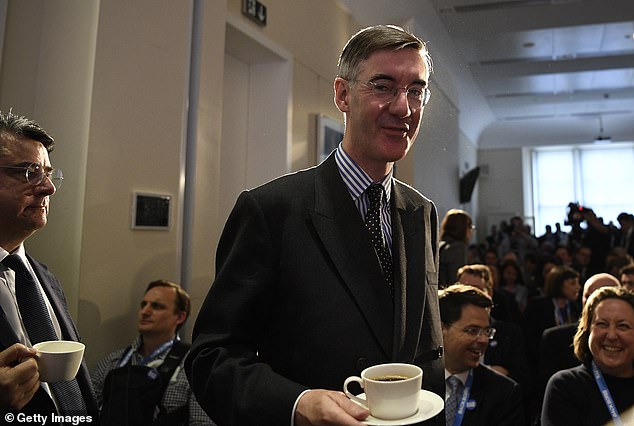 They argue that teaching children as young as four and five about same-sex relationships is not consistent with Islam.

Most adults resisted the idea that new mothers should leave their baby and go out to work to pursue their career.

The survey found that 51 per cent believed mothers should do most of the childcare for a new baby and that nearly one in five think mothers should stay at home while fathers work.

There was also scepticism over the importance of the gender pay gap. Only 48 per cent of women said this was wrong in organisations where men held mainly senior jobs and women mainly junior jobs.

Among graduates, only a third thought a pay gap was wrong in such a company.

Nancy Kelley, of the National Centre For Social Research which carried out the survey, said: ‘It is clear that practical barriers and cultural norms about women’s place in the home and at work persist.

‘We are still more likely to feel that mothers should be at home with young children.  While pay equality is seen as wrong, the public has far more mixed views about the gender pay gap.’

Politicians have weighed in on the debate on both sides, with local Labour MP Jess Phillips defending the inclusive curriculum, while Tories Esther McVey and Andrea Leadsom expressing their support of the parents’ rights to object.

Newly-elected Brexit Party MEP Ann Widdecombe caused outrage when she said there would one be a ‘scientific answer’ to being gay.

Other politicians have sparked controversy by expressing their conservative views on same-sex relationships, including Jacob Rees-Mogg, who opposes them on ‘religious grounds’.

Homosexuality was legalised in Northern Ireland in 1982, 15 years after the rest of the UK.

Elsewhere in the BSA survey, it shows the British public is not as worried about climate change as its political leaders.

It also reveals 51 per cent of people believe mothers should stay at home and do the majority of childcare duties.

Views on Brexit are divided along the lines of age and levels of education, the poll claims. 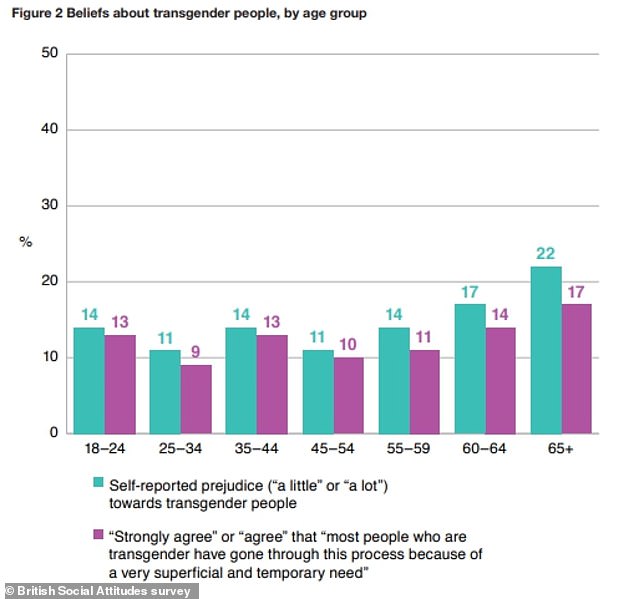