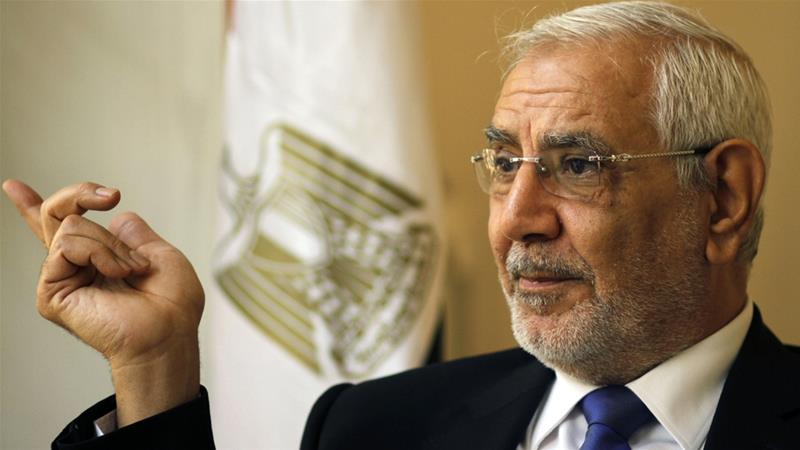 Egypt’s presidential election is a “referendum with guaranteed results” for President Abdel Fattah el-Sisi, according to a leading opposition figure.

In an interview with Al Jazeera, Abdul Moneim Aboul Fotouh said he encouraged citizens to boycott the “absurd” vote, expected to take place between March 26 and 28, saying “no sane Egyptian would accept” the poll.

A former member of the Muslim Brotherhood and leader of the centrist Strong Egypt Party, Aboul Fotouh ran as an independent candidate in the 2012 presidential elections, gaining nearly a fifth of the vote in the first round.

“That was the only free presidential election Egypt had ever witnessed,” he said.

“A boycott of this mockery is a duty, in our opinion, because we don’t accept for Egyptians to participate in a farce,” he said, of the March vote.

Egypt is currently governed by a “dictatorial police regime that hates politics and rejects it, even in a superficial manner”, Aboul Fatouh claimed, saying President Sisi wants the state to fully submit to him with its executive and supervisory authorities.”

Mubarak, who ruled for 30 years, was a “dictator” but understood that “display politics was an outlet for the people”, Aboul Fatouh said.

On January 28, Aboul Fotouh and four other Egyptian opposition figures called on citizens to boycott the elections and not recognise results.

Moussa, leader of the el-Ghad (Tomorrow) Party, reportedly submitted his papers minutes before the nominations deadline, in what was viewed as a last-minute effort by the Sisi government to legitimise the elections.

“This was not a candidacy but rather an assignment,” he said.

Opposition in ‘worst condition ever’

On Monday, Egypt’s prosecutor-general ordered an investigation into 13 opposition figures from the Civil Democratic Movement coalition over accusations of attempting to overthrow the government.

The group of eight opposition parties and more than 150 activists and political figures have also called for an election boycott.

Earlier this week, Moussa, Sisi’s only challenger, said people calling for boycotts would be put on trial for treason, saying they were “betraying” their country.

Egypt has cracked down on dissent since the military – then led by Sisi – staged a coup in 2013 against Mohamed Morsi, the country’s first democratically elected president.

Human rights conditions have deteriorated, with organisations reporting that at least 60,000 have been imprisoned.

The government has squeezed media freedom, while activists and journalists have been either imprisoned or barred from travel.

Under these circumstances, the opposition “has unfortunately declined to its worst condition ever”, Aboul Fotouh said.

Timothy Kaldas, a non-resident fellow at the Tahrir Institute for Middle East Policy, said the opposition was suffering even more so than in the late Mubarak years.

Moussa, Sisi’s only challenger, has repeatedly endorsed the current president.

Those images were later taken down.

Critics joke Moussa is “Al-Kombars”, which loosely translates to someone playing the role of an “extra”.

Moussa rejected such accusations, saying that he will not be a “background actor” to Sisi in the election.

“I am looking forward to a strong and real electoral competition with the president, especially as I have a strong platform that relies on young people and addresses the rising prices,” he said, according to local media.

Kaldas says the government is sending “a message of intimidation” with a candidate like Moussa.

“If I have someone that is completely absurd like Moussa Moustafa Moussa, then the situation is different, and I’m signalling that I don’t care, that I can do what I want and get away with it,” he said.

‘There is no election’

Prior to Moussa’s nomination, a string of potential candidates withdrew their candidacy after being subjected to arrests or intimidation.

Sami Anan, former army chief, quit in January, after being arrested following his announcement to run.

Army colonel Ahmed Konsowa was sentenced to six years in prison after he released a video last November announcing his intention to run.

Former Prime Minister Ahmed Shafik was deported to Cairo after announcing his candidacy from the UAE. He was then reportedly held at a Cairo hotel, before withdrawing on January 7.

In a statement, Amnesty International said Anan’s arrest was a “brazen attack” on freedom of expression and political participation in Egypt.

“It is clear that the Egyptian authorities are hell-bent on arresting and harassing anyone who stands against President Sisi,” the statement said.

The National Council for Human Rights (NCHR), a state-funded human rights organisation, recently said it will freeze the membership of members who take a public political stance or support a particular party during the election period.

“It’s not a question about who’s going to win the election,” says Kaldas of the Tahrir Institute. “There is no election, that’s not the issue. It’s how many people will actually bother to go vote in a voting event where the winner has already been determined.”