Prince Andrew on the ropes: A step by step guide to how Duke of York told HIS story in BBC interview that gripped millions of viewers

It was seen as his chance to finally set the record straight on one of the darkest episodes in modern royal history.

But to the millions at home watching Prince Andrew squirm while being quizzed about every detail of his private life, it posed more questions than it answered.

The Duke of York rebutted allegations that he had three sexual encounters with a teenage girl introduced to him by paedophile financier Jeffrey Epstein.

Insisting he had ‘no recollection’ of ever meeting Virginia Roberts, the prince put forward a series of sometimes unusual explanations as to how the pair could not have been together in the circumstances she has suggested.

Insisting he had ‘no recollection’ of ever meeting Virginia Roberts, the Duke of York put forward a series of sometimes unusual explanations as to how the pair could not have been together in the circumstances she has suggested, including a claim that he suffers from a rare medical condition which means he is unable to sweat. Pictured: Prince Andrew appears to suffer a sweaty moment as he leaves Chinawhite nightclub in London in 2000

Virginia Roberts – now a 36-year-old mother known as Virginia Giuffre – claims she was forced by Epstein to have sex with Prince Andrew three times.

The first occasion was allegedly in March 2001 when the 17-year-old was flown to London on Epstein’s private jet with alleged ‘madame’ Ghislaine Maxwell.

The prince claims he was introduced to Epstein through Maxwell in 1999, having met her while she studied at Oxford.

Miss Roberts claims that during their first meeting, the group had dinner and then went dancing at the Tramp nightclub in Mayfair.

In court depositions previously filed in the US, Miss Roberts said the group returned to Maxwell’s mews house in Belgravia, central London, where the pair took a bath together before having a sexual encounter.

Her claims were struck from the record by a US judge in 2015, who described them as ‘impertinent and immaterial’.

Andrew and Buckingham Palace have repeatedly denied the claims.

It was during this meeting – believe to be March 10, 2001 – that the prince is said to have posed for the now-infamous photo with his arm around Miss Roberts’s waist.

The Duke of York rebutted allegations that he had three sexual encounters with Virginia Roberts, introduced to him by paedophile financier Jeffrey Epstein

Responding to the allegations on BBC’s Newsnight, Prince Andrew said: ‘I have no recollection of ever meeting this lady, none whatsoever.’

On Miss Roberts’s claims that he bought her a drink, the prince said: ‘I don’t know where the bar is in Tramp’s. I don’t drink, I don’t think I’ve ever bought a drink in Tramp’s whenever I was there.’

The prince is a bona fide teetotaller and has been for a large part of his adult life. He said he didn’t know where the bar was. However, pictures taken on multiple occasions between 1983 and 1990 place him at Tramp nightclub. Flight records from Epstein’s private jet – dubbed ‘the Lolita Express’ – place Miss Roberts in London on the day in question following a whistle-stop tour from Palm Beach, Florida to Canada, Paris, Grenada in Spain and Tangier in Morocco, before touching down in Luton on March 9, 2001.

She left Luton Airport two days later to return to the US and allegedly developed the photograph of her and Andrew together on March 13.

Miss Roberts claims she and the prince had sex on a second occasion at Epstein’s palatial Manhattan townhouse.

Andrew said the property had so many people coming and going that it was more like a ‘railway station’.

The duke is said to have used a present – a latex puppet of himself from the TV series Spitting Image – in a prank to grope the breasts of Miss Roberts and another woman, Johanna Sjoberg. Miss Sjoberg spoke out about the alleged incident four years before Miss Roberts first went public with her allegations in 2011. In an interview with The Mail on Sunday in 2007, she said: ‘We had a picture taken. Virginia, another girl there, sat on a chair and had the puppet on her lap. Andrew sat on another chair, I sat on his lap – and he put his hand on my breast. 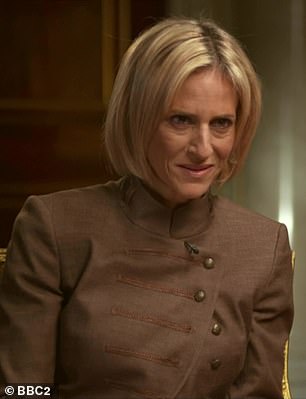 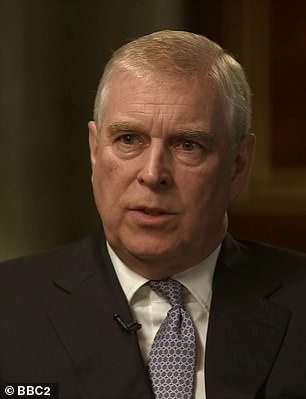 Putting the claims to the prince, Emily Maitlis (left) said: ‘In a legal deposition 2015, she said she had sex with you three times.’ The prince said the incidents had not taken place, but stopped short of accusing Miss Roberts of lying

‘Ghislaine put the puppet’s hand on Virginia’s breast, then Andrew put his hand on mine. It was a great joke. Everybody laughed.’

A Buckingham Palace spokesman said: ‘This relates to proceedings in the United States, to which the Duke of York is not a party. Any suggestion of impropriety with underage minors is categorically untrue.’

The duke said the alleged sexual encounter could not have happened because Miss Roberts had already departed New York for Epstein’s private island before the prince returned to the city.

‘I think that the date we have for that shows that I was in Boston or I was in New York the previous day and I was at a dinner for The Outward Bound Trust in New York and then I flew up to Boston the following day and then on the day that she says that this occurred, they’d already left to go the island before I got back from Boston,’ he said. The Court Circular shows that the prince departed London Heathrow on April 9 for New York. Flight logs of Epstein’s private jet suggest Miss Roberts arrived in New York from Florida the same day.

The following evening the prince did indeed fly to Boston for a meeting with the Outward Bound Trust – a UK-based educational charity of which he is patron – returning to New York on the afternoon of April 11.

Flight logs show that Miss Roberts, Epstein, Maxwell and a ‘Joann’ – thought to refer to Johanna Sjoberg – departed New York for St Thomas in the Caribbean at some time on April 11. Andrew suggests the timings mean the alleged sexual encounter ‘couldn’t have happened at all’. He added that a sexual encounter could not have taken place because he was staying with the Consul General – a premises on the same street as Epstein’s mansion.

Andrew’s third alleged sexual liaison with Miss Roberts is said to have occurred around the time of her 18th birthday on Epstein’s private Caribbean island – Little Saint James.

Putting the claims to the prince, Emily Maitlis said: ‘In a legal deposition 2015, she said she had sex with you three times.

‘Once in a London house when she was trafficked to you in Maxwell’s house. Once in New York a month or so later at Epstein’s mansion and once on his private island in a group of seven or eight other girls.’

Andrew said the incidents had not taken place, but stopped short of accusing Miss Roberts of lying. ‘I’m not in a position to know what she’s trying to achieve but I can tell you categorically I don’t remember meeting her at all,’ he said.

‘I do not remember a photograph being taken and I’ve said consistently and frequently that we never had any sort of sexual contact whatever.’ 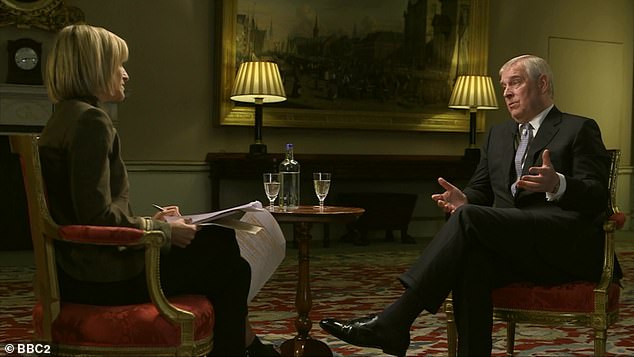 Andrew said the incidents had not taken place, but stopped short of accusing Miss Roberts of lying. ‘I’m not in a position to know what she’s trying to achieve but I can tell you categorically I don’t remember meeting her at all,’ he said

The Court Circular does not indicate where the prince was during this period, however by April 15 – Easter Sunday – he was reportedly in the Bahamas. He had been absent from the Queen’s Easter service at Windsor Castle, and a courtier told The Daily Telegraph that he was on holiday at the exclusive destination – about a two-hour flight away from Epstein’s island.

New claims unearthed by the Mail appear to place Andrew on the island around the time Miss Roberts alleges their encounter took place.

Miss Beck, a Donald Trump fan who was given thousands of pounds by Epstein when she unsuccessfully ran for congress in 2014, said she had been on Little Saint James in the days preceding April 16, 2001.

In a previously unseen email to a freelance journalist, sent in 2015, she claimed the prince arrived ‘very late at night’, stayed for the following day and left early the following morning.

‘He was in the bungalow next to me,’ she claimed. ‘I heard no strange noises or anything unusual. If anything, he was flirting with me, but as I mentioned before I was in love with someone else.’

WHY DID THEIR FRIENDSHIP CONTINUE?

The prince and Epstein continued to socialise well into 2006. In May of that year, an arrest warrant was issued for the financier for sexual assault of a minor. Despite this, Epstein was invited to Windsor Castle for Princess Beatrice’s 18th birthday party.

Defending the invitation, the prince said: ‘I was asking Ghislaine. But even so, at the time I don’t think I… certainly I wasn’t aware when the invitation was issued what was going on in the United States.’

Epstein was arrested eight days after attending the celebrations.

Prince Andrew told the BBC that he ‘ceased contact’ with Epstein ‘after I was aware that he was under investigation and that was later in 2006’.

In September of that year, Andrew flew on Epstein’s private jet. Epstein was not on board the Luton to Edinburgh flight, said to be to a private wedding, however Maxwell was.

He said he did not speak to him again until 2010, when they were pictured walking together in New York’s Central Park, shortly after the paedophile’s release from prison. 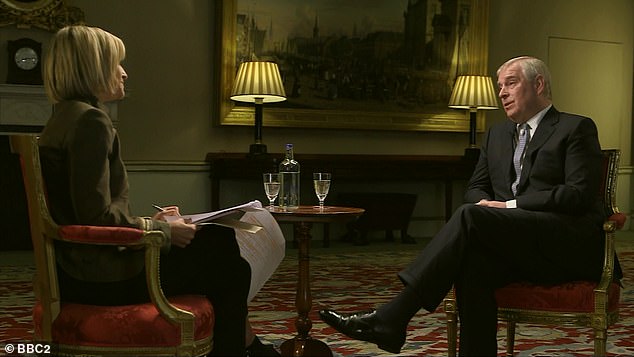 The prince stayed at Epstein’s New York home for several days, despite telling Miss Maitlis he had visited him solely to break off their friendship.

It was ‘a convenient place to stay’, he said. ‘With a benefit of all the hindsight that one can have, it was definitely the wrong thing to do.’

It was put to the royal that Epstein had held a party to celebrate his release from prison during that trip, with the duke invited as the ‘guest of honour.’ Andrew confirmed he attended a ‘small dinner party’.

His reason for visiting the convicted paedophile to end their friendship?

‘My judgment was probably coloured by my tendency to be too honourable, but that’s just the way it is,’ he said.

Responding to allegations about the prince’s timeline, a Buckingham Palace spokesman said: ‘His Royal Highness was very clear, as he has been consistently, that he did not have any form of sexual contact or relationship with Virginia Roberts.’