Two K-9s with a local sheriff’s office in Florida are recovering after an armed carjacking suspect shot both dogs during a police pursuit early Saturday, authorities said.

“There is no doubt that K-9 Ax and K-9 Endo took bullets that were meant for my deputies,” Sheriff Mike Chitwood said in a media briefing Saturday afternoon. “If the deputies would have gone into the woods, the first person to come in contact with Singleton, without a doubt, would have been shot.”

Chitwood praised the dogs, saying both had to be pulled away from the suspect even after they were shot. Both K-9s were back on their feet Sunday and are continuing to recover. 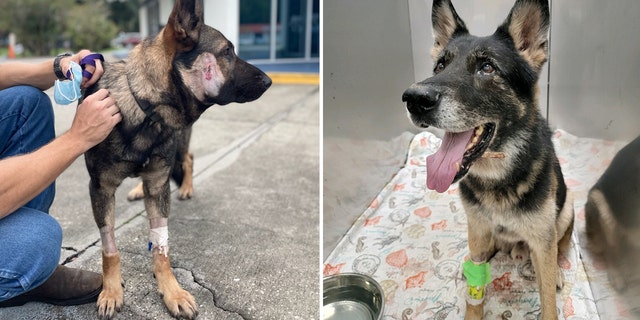 The incident happened early Saturday after the suspect directed his Lyft driver to take him to a remote road, where he then carjacked the white Kia Sedona minivan at gunpoint.

When deputies located the minivan, the suspect bailed out near the Deltona Gardens Apartments and ran into a wooded area.

The sheriff’s office released graphic bodycam footage of the shootings and deputies rushing to help their K-9 partners.

The first shooting occurred about 10 minutes after the suspect’s bailout when K-9 Ax tracked the suspect in the woods. K-9 Ax was then shot in the face while the suspect fled deeper into the woods.

As law enforcement from multiple agencies closed in on the suspect, he was spotted running out of a wood line around 2:20 a.m. Deputies moved in and exchanged gunfire with the suspect.

K-9 Endo was shot during the exchange. No deputies were injured during the incident.

The suspect, identified as 21-year-old Shedrick Singleton Jr., was struck multiple times. He suffered life-threatening injuries and was rushed to a hospital. 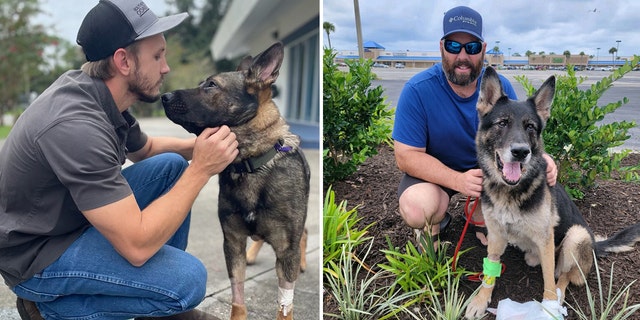 K-9 Ax was rushed to the Animal Emergency Hospital Volusia in Ormond Beach by his handler Deputy A.J. Davis. The Daytona Beach Police Department sent its own K-9s to the clinic to donate blood for Ax.

K-9 Endo was taken to the Veterinary Emergency Center of East Volusia in South Daytona by his handler Deputy Brett Whitson. Endo has previously been awarded the sheriff’s office Medal of Valor and Purple Heart after he was shot in the neck responding to a domestic violence call in 2015.

Singleton faces charges of armed carjacking and use of a deadly weapon against a police K-9.