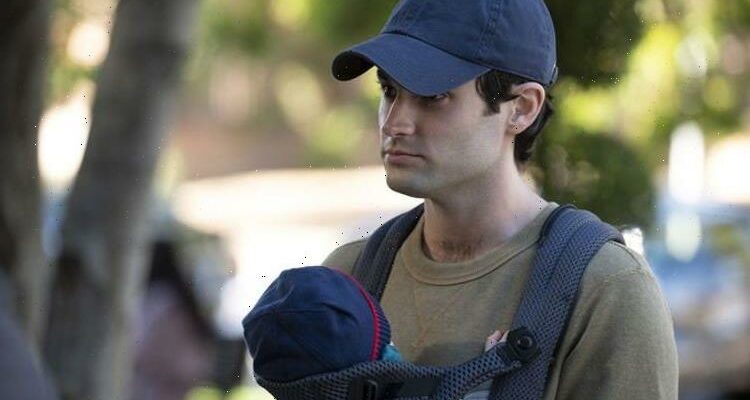 You is returning to Netflix for a third outing soon and fans are excited to see Penn Badgley return as serial killer Joe. In the season two finale, his new romantic partner Love Quinn (played by Victoria Pedretti) shocked viewers when she killed Candace (Ambyr Childers).  Love and Joe were then seen moving in next to an innocent family and it was suggested Joe may have his eye set on a new target.

The official Twitter account for the new series shared a photo of a slice of cake with the date 10.15.21 written on it.

They added: “Whoever said raising a child would be a piece of cake? YOU S3 is coming October 15.”

The video shows a cake being made and Joe’s voice is heard saying to his baby son: “For you, I can change. I’ll be a man you look up to.

“A man you will be proud to call Dad. So, what to call you? A name that’s strong, but not intimidating. Classic, but not basic. Literary, of course, because you will grow up in a house full of books. Henry.

“Choosing your name is the first of a lifetime of decisions I’ll make to give you the best life possible, to protect you, to shape who you will become. Who are you going to be, Henry?”

Fans took to the comments to share their thoughts on the next instalment, with one saying: “FORTY-SIX DAYS LEFT !! THE COUNTDOWN HAS BEGUN.”

Another added: “Terrifying parents but at least he’s got a cute name.”

Viewers were in shock in the season two finale when they saw Love turn against Candace as she tried to console her.

She found out the truth about her deranged partner, but this did not stop her from wanting to be with him.

Instead, she took a broken bottle to Candace’s throat and watched as she died in front of her.

This left fans wondering whether Love and Joe would become the ultimate evil couple in the third season.

As Joe is known to move on to a new target rather quickly, viewers are still expecting him to meet someone new in the upcoming season.

But, with a new baby and the prospect of fatherhood weighing him down, will he have the time and energy to keep up his harrowing schemes?

In the teaser he is heard saying: “People these days will name their kids anything to get attention.

“And despite your mother’s background and your Glamma’s determination to refer to you as Forty reincarnated, I know better.

“A boy is not what we expected, and I would be lying if I said the thought of a mini-me was purely exciting and not without… challenges. Let’s just say, I’m hoping you’ll do as I say, not as I do.”

From this, it seems Joe is determined for his son not to turn out the way he did, so he could be regretting his actions.

Fans have taken to the teaser comments to express how Joe’s vulnerable side comes through.

One said: “A literary name because he’ll grow up in a house full of books okay I’m a little soft.”

Another said: “Finally a date yess!!! I wonder why they chose Henry for the name?”

As for what viewers can expect from the third outing, Joe and Love are now married with their baby son and they have moved to Northern California.

Joe is getting used to his new role as a husband and father, but following the season two finale, he remains in fear of his wife’s impulsive behaviour.

Perhaps she will become the big bad of the third season as Joe starts to realise the error of his ways?

One fan added: “This will be a interesting watch I just became a parent recently can’t wait to see how joe and love parent there child.” [Sic]

Another said: “A show about a baby raised by homicidal/sociopathic parents, What’s not to like?”

You season 3 will air on Netflix on October 15.