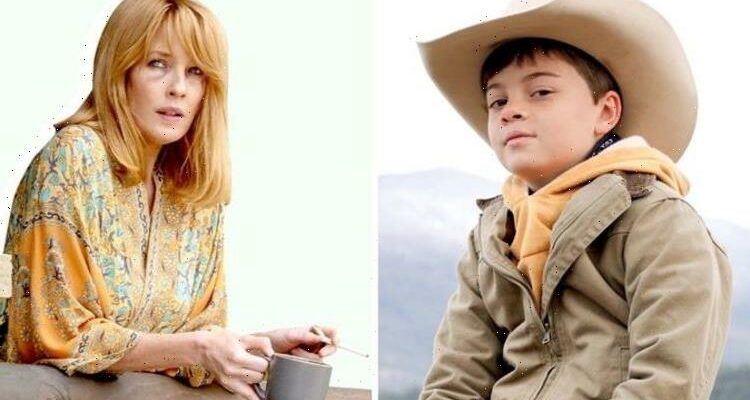 Both Yellowstone star Kelly Reilly and its showrunner Taylor Sheridan had their birthdays over the last weekend. To celebrate, Tate Dutton himself Brecken Merrill took to his Instagram account to share some exclusive insight from the set of the Paramount drama.

Brecken Merrill revealed his co-star Kelly Reilly was worried about a particular scene from the drama’s second season.

In the Western drama’s thrilling follow-up, John Dutton (played by Kevin Costner) goes up against the notorious Beck Brothers.

Malcolm Beck (Neal McDonough) had struck a deal with Dan Jenkins (Danny Huston) to muscle in on the Duttons’ land in the hopes of building a new casino.

When the ranch owner refused to budge, Beck sends a gang of men over to terrorise John’s daughter, Beth (Kelly Reilly).

After the assault, Beth is left with horrific bruises and scars over her face, which she retains throughout the rest of the season.

Although Kelly Reilly was perfectly comfortable wearing the fake injuries, she was concerned her young co-star would be uncomfortable with her new look.

As Merrill would have only been ten years old at the time of filming for season two, Reilly made sure he knew the makeup effects weren’t real.

On his Instagram post, the star recalled: “Tate doesn’t get much screen time with Beth, so I don’t have many #bts pics with her, but I have a great story.”

Beth was usually seen handling the ranch’s finances, but her attack meant she spent more time with the family and love interest Rip Wheeler (Cole Hauser) during season two.

Because of this, she went to great lengths to ensure Yellowstone’s young cast member wasn’t frightened by her convincing fake injuries.

Merrill continued: “There’s a breakfast scene right after Beth gets beat up and she has cuts and bruises all over her face.

“Kelly was so worried she looked scary she made a point of coming over to me and showing me it was all fake makeup.”

The young actor also recalled a similar moment with the showrunner Taylor Sheridan.

As the only child actor on set for most of the series, the cast are required to ensure Brecken Merrill is in a safe environment during his time on Yellowstone.

Unfortunately, this sometimes leads to the actors limiting their performances if Merrill is involved in particular scenes.

He explained: “The Taylor pics are from the scene at the hospital when Tate smacks a nurse.”

“The actress playing the nurse was very sweet and scared to hurt me, so she wasn’t really grabbing me hard enough.

“Taylor stepped in and showed her all my layers of protection and that it was okay to really grab at me and push me around. I had so much fun filming that scene!”

Brecken Merrill has gone from strength to strength as an up-and-coming actor throughout Yellowstone’s first three outings, and will undoubtedly put in another impressive performance in the upcoming season four.

Yellowstone season 4 will premiere in autumn 2021 on Paramount.