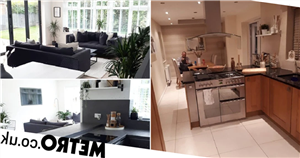 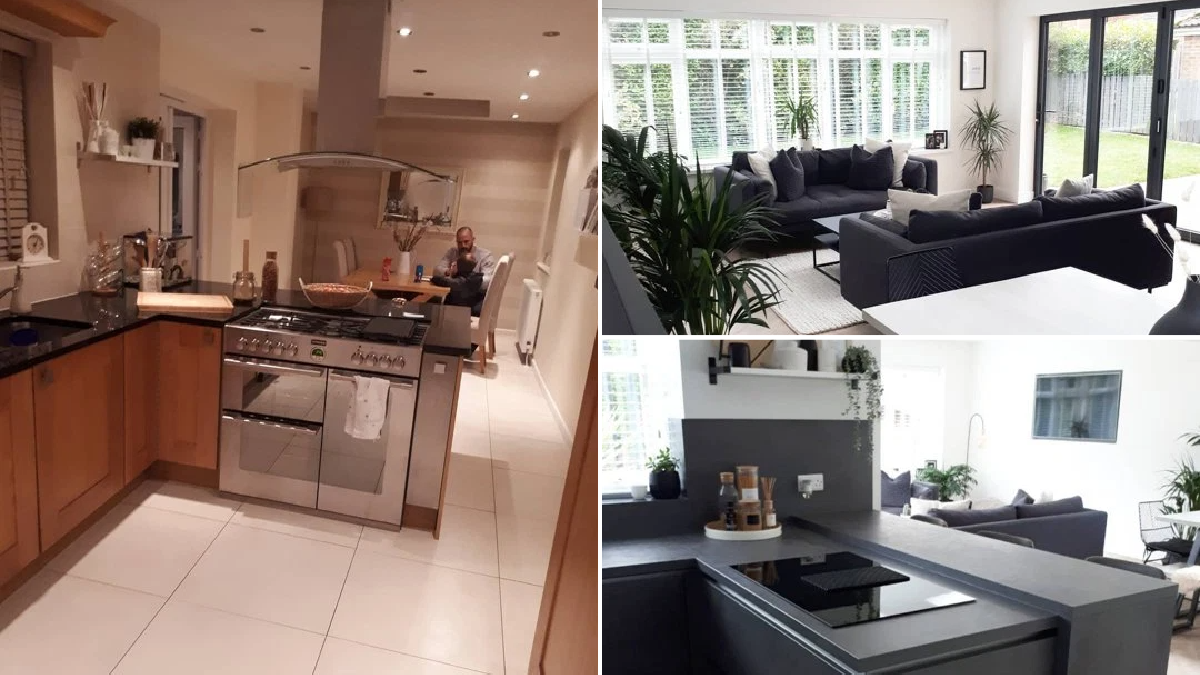 A woman has shared the incredible transformation of her 1990s home, which has been given a stunning Scandinavian makeover.

But the makeover came with a unique set of challenges, including surviving without a kitchen for three months – being forced to live off microwave meals and a BBQ in the garden during freezing temperatures.

They started renovations by ripping out the kitchen and had only planned to be without it for a week or two, but lockdown restrictions knocked them off course.

Alison and Richard were told they wouldn’t be able to have a kitchen fitted for several months.

‘We had been talking about doing the renovations for a few years but finally took the plunge and ripped out our old kitchen one week before the first lockdown in 2020,’ says Alison.

‘We didn’t know if we would be without a kitchen for months. At that point, we were going to live on McDonalds – but then that closed too.

‘People were stockpiling food and we couldn’t even get a few items as we had nowhere to store anything.’

So, they turned to their trusty microwave, BBQ and slow cooker as they did what they could to complete the renovations without tradesmen in the house.

Alison adds: ‘It was tricky, especially as all restaurants and cafés, even takeaways, [were] closed.

‘We were also not allowed to go to friends and family to eat as we couldn’t go into people’s houses or even gardens at that point.

‘We had a microwave, fridge and a slow cooker set up in a spare bedroom, so we had lots and lots of stews and used the BBQ outside.’

Over the last few decades, the property had had multiple extensions, so Alison, decided to knock through an exterior wall to create a larger, open plan kitchen-diner/living room with bifold doors leading to the garden.

But lockdown meant everything moved very slowly and the family spent three months living without heating and flooring in some rooms.

‘I was homeschooling two children with an upside-down house, working from home and with no kitchen,’ says Alison.

The couple hired local tradesmen to help with plastering, woodwork, rewiring, flooring and plumbing, Alison was responsible for the style and interior design.

‘I took inspiration from Instagram and Pinterest,’ she says. ‘I wanted lots of indoor plants in each room, the rest just came together bit by bit. We wanted the rooms to flow from one to another.

‘In the open plan kitchen/utility, living and diner, we knocked down an external wall to open up the whole back of the house and installed a new dark kitchen, along with the herringbone-style floor.

‘We then decorated in white paint to have a fresh clean space, with new bi-folds, radiators and furniture and a sunken TV in the wall, and all wires hidden for clean lines.

‘I added textured rugs, cushions etc. for a homely feel.’

The mother-of-two also updated her son and daughter’s playroom with toys hidden away to create a more grown-up space for the pair to play with friends.

After restrictions were lifted, Alison hired in a joiner to fit panelled cupboards in her bedroom and a long shelf above the master bed.

The couple also converted one of the rooms into a home office.

‘This is our second home together and our styles have really changed over the years,’ adds Alison.

‘We know what we like now, a mix of monochrome/neutrals and lots of greenery.

‘Richard and I have made the most of the space that we have so we can be together as a family as well as having our own space.

‘Also it’s now a great space for entertaining. The next project is the garden.’

They couple hired a plumber to install the new radiators in their home and a joiner who installed all the new woodwork including doors, skirting, building two TV walls and setting up their panelled wardrobe.

They also hired tradesmen for the plastering, new electrics, decorating and flooring.

Nine months later, upon completing the renovations, an unforeseen event struck – as a leaking pipe destroyed an area of the freshly-decorated open plan space.

‘It was such a blow as we had finally got everything finished and then it was a step back,’ says Alison.

‘We had to replace the skirting and redecorate some of the kitchen. Our friends chipped in to help as there was water spraying out everywhere.’

Despite the hurdles, the couple, who spent around £35,500 on the renovation, are now finally able to enjoy their new home.

‘We are so pleased and it was worth all of the stress, mess, sleeping on a mattress, sitting on outdoor furniture indoors and dust everywhere,’ she says.

Alison advises others to take their time and create a storyboard before starting their own renovation.

She also recommends sending messages to people who have done similar projects on Instagram and warns others to prepare for mess in every room, as well as things going wrong.