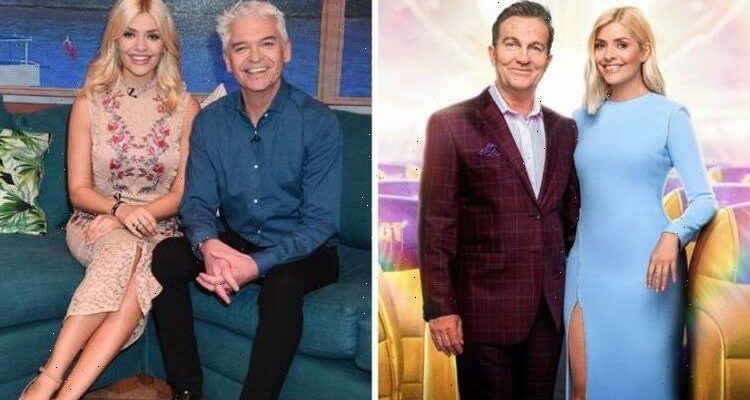 Take Off with Bradley and Holly trailer released by BBC

Holly Willoughby has been serving as the popular This Morning host for over 10 years on ITV. Now she is joining the BBC for a primetime TV show with Bradley Walsh. But will the star stay with ITV still?

Will Holly Willoughby stay on This Morning?

Holly Willoughby and Bradley Walsh’s new series, titled Take Off With Bradley and Holly, premieres this Saturday (July 24) at 6pm on BBC One.

The show will see contestants compete against one another for the chance to win the trip of a lifetime.

Fans will remember that the show originally debuted as a Christmas Special in 2019, but now it is back for a full run.

This Morning viewers might be concerned that this will spell the end of the star’s time on the ITV show.

Willoughby has been a co-host on This Morning alongside Phillip Schofield since 2009, delighting fans with their natural on-screen chemistry.

For any fans worried that this would be coming to an end now Willoughby is joining the BBC, they can rest assured the star is not leaving the ITV morning show.

A TV source recently revealed to The Mirror that Willoughby “has no desire at all to walk away,” putting fan speculation to rest.

The TV source continued: “Holly is more than happy on This Morning and is proud to have been involved for so long.

“She has no desire at all to walk away and there’s no truth in the stories that she wants to leave.

“Holly loves working with Phil and the ITV team and doesn’t want to stop now.”

Speculation originally grew due to the star currently being away from the ITV morning show.

Willoughby is on summer holiday right now, taking a break from the weekly show, which some took as a sign of her departure.

However, this is just the stars’ typical summer break and not an indication of her supposed intentions to leave The Morning.

The presenter did take some time from her break to share the trailer for the new BBC show, letting fans know what to expect.

Willoughby captioned the post: “Morning! How are you?… just got sent this through of my new show with @bradderswalsh it’s called Take off…

“It starts this Saturday at 6pm on @bbc… So much fun was had filming this one and working with a total genius/wally … #wallywalsh #takeoff #holiday!”

Fans also shared their excitement for the upcoming series, with many of them rushing to the comments to share their thoughts.

One fan said: “Fantastic! Some great TV on a weekend now!”

Another fan added: “Noooo you’ve dumped Philip!!! Weird seeing you host with someone else!!!”

“Looking forward to Take Off… It looks great. Also Wally Walsh… love it,” a third commented.

Take Off promises to include “hilarious games, celebrity surprises, inspirational stories and plenty of in-flight entertainment,” according to the BBC synopsis.

The trailer shows contestants on board a set up plane, with Willoughby and Walsh having a lot of fun on stage guiding them through the challenges.

This Morning airs weekdays from 10am on ITV.