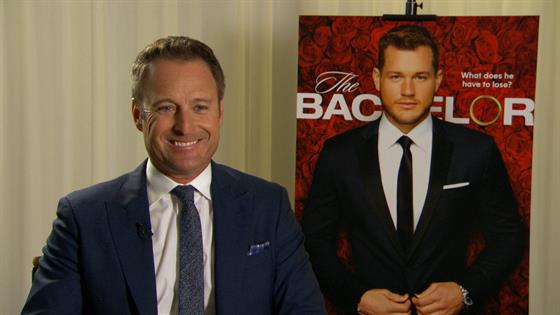 It sounds like we’re in for a wild ride when The Bachelor returns in a few weeks with new star Colton Underwood.

Normally, Chris Harrison would be happy to declare that whatever season is coming up is the most dramatic season ever, but this time, he’s hesitating.

“If you say it’s dramatic people are like, oh that means drama and villains and tears, and yes there will be that, but the emotional kind of journey you go through with Colton this season and the stories that come out between the women, between Colton, it’s a lot deeper than we usually get. I’ll just say that,” Harrison tells E! News in the video above.

He also acknowledges that yes, there’s gonna be a lot of virginity talk, jokes, and “cliches,” especially on night one, but he promises the show will move past that.

“I knew the cocktail joke part of the virginity was going to be a thing, and I”m ready to get past that. I know [Colton] is too,” he says. “And look, the good news is he has a good sense of humor about it. He’s a good sport. But all I can say is you’re going to have to watch. He’s ready.”

Now, we’ve also got to figure out what the heck is going on with this fence jump. We saw in the first promo for the season that at some point, Colton jumps over a fence while Chris Harrison is yelling after him, making it seem like it’s an actual bit of drama and not just Colton having fun hopping over fences.

Based on what Harrison had to say about the moment, it sounds like it actually was a “dramatic moment.”

“I thought I had him boxed in because of the fence. Little did I know, I did not, and I was dealign with an NFL athlete that could easily make waste of that fence,” he tells us. “Usually with these Bachelors I can keep up with them, Colton I cannot keep up with.”

Why on earth was Harrison wanting to box Colton in? Are they playing a game, or is this Colton trying to escape a date or tough questions from Harrison himself?

Whatever’s going on, we can’t remember the last time Harrison talked about a Bachelor or Bachelorette this way, like maybe he and the show got more than they bargained for.

For more on what to expect this season, watch the video above.

The Bachelor premieres Monday, January 7 at 8 p.m. on ABC.