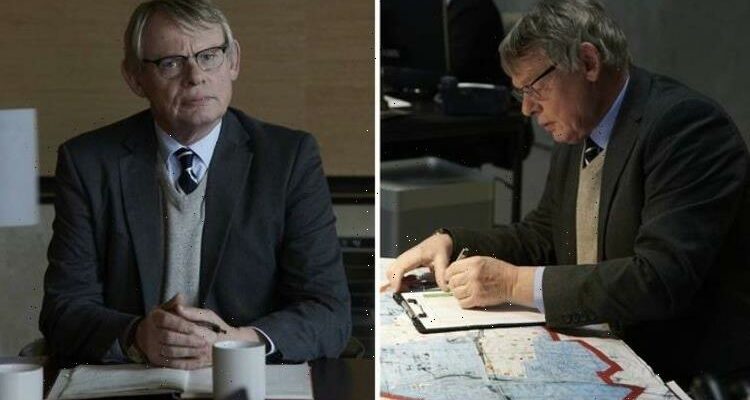 Actor Martin Clunes returns as Detective Colin Sutton for the second season of Manhunt on ITV. The series is based on the real-life detective, his work investigating murders that really took place and how he was able to crack some of the country’s most difficult cases. Season one aired in 2019 so fans have been waiting a while for the second series of the crime drama.

The first series of Manhunt saw Detective Sutton link the murders of Amelie Delagrange with those of Marsha McDonnell in 2003 and Milly Dowler the year prior.

The investigation led to the killer Levi Bellfield being found guilty and sentenced to life imprisonment.

For season two, Sutton will be introduced to the case 17 years after the police’s hunt for a serial rapist began.

The culprit robbed, sexually assaulted and raped elderly people for near on two decades.

Where is Manhunt on ITV set?

Manhunt, seasons one and two, are set around Greater London.

Detective Sutton was the SIO (Senior Investigating Officer) for the Metropolitan Police so his job took him all over the capital.

Series one kicked off following the murder of Delagrange on the Twickenham Green, in the southwest of Greater London.

Season two on the other hand sees the police follow the notorious rapist around south London generally.

Where is Manhunt on ITV filmed?

Despite the drama being set in London, the majority of the filming for season two took place in Bristol.

The old Bank of England which sits next to St Mary le Port Church on Bridge Street was turned into a London police station for the series.

Other key locations used include the Lord Mayor’s Reception Room in City Hall, Westbury on Trym, A Bond Warehouse on Bristol’s Floating Harbour and various residential streets in Stoke Bishop.

Some filming was also done in London with scenes shot in Berkeley Square and Woolwich where Clunes was spotted by a fan.

Speaking of the decision to film in Bristol, executive producer Philippa Braithwaite said: “It proved to be an extremely good decision.

“We started filming in mid-October 2020, when the Covid figures were rising again after the summer, and continued in Bristol right through until Christmas.

“Bristol went into Tier 3 during our shoot and we ended the Bristol shoot with all the government’s changes of plans over what was allowed for Christmas itself.

“Not an easy time to be working in close proximity to a large group of fellow professionals.

“Before that, we had to film in various locations around the city, often at night, but moving between locations was far easier than it would have been in London, and without exception, we found location owners helpful and understanding.”

The mini-series will be made up of four episodes in total which will all air on ITV before being released on the streaming service ITV Hub.

Manhunt series two is going to be shown over four consecutive nights, with the finale being released on Thursday, September 23.