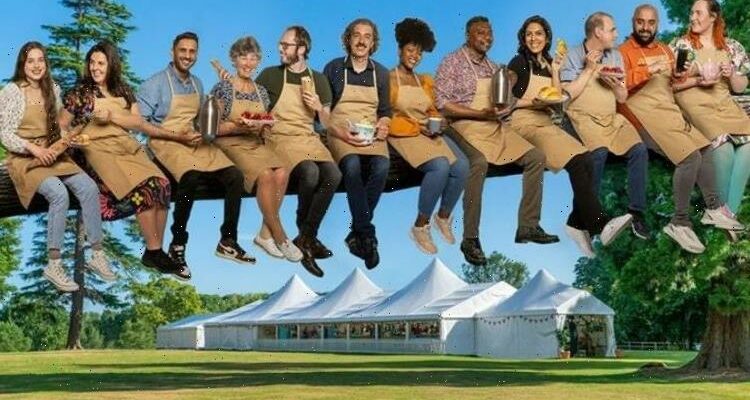 Great British Bake Off returns tonight (September 21) on Channel 4, bringing a fresh batch of enthusiastic amateur bakers. The 2021 series will see the team returning to the iconic tent to cook up culinary delights. Fans love the show, not just for the delicious desserts, but also for the idyllic location.

Where is Bake Off filmed?

With Bake Off back, fans are eager to see what this year’s contestants cook up in order to reach the finale.

There is still a long way to go before that, with all 12 of the bakers set to venture into the tent for the first time on September 21.

Yes, the iconic tent will once again be making an appearance, with the contestants, judges, and hosts diving into a whole host of new challenges.

However, the location of the tent has moved, no longer housed on the grounds of Welford Park Hotel in Berkshire.

This series has made Down Hall Hotel its home, which is located in Essex.

Production hasn’t been easy for the team this season, with filming first kicking off in May 2021.

Due to restrictions put in place as a result of the coronavirus pandemic, the typically relaxed atmosphere in the tent will be stricter this time around.

Co-host Matt Lucas shared the news to ITV’s Lorraine earlier this year, explaining that the restrictions were set to be much like the 2020 series.

“All self-isolating and getting tested and then we’re going into COVID-free bubble, so we can all taste each other’s bakes and there can be handshakes and all sorts.”

This was the reason for the move to Down Hall Hotel, as it allowed the crew to create a COVID safe bubble for the team.

A spokesperson for the show told Berkshire Live: “It has been well documented that the series was filmed in a covid-secure bubble this year, and the venue allowed for that.”

The cast and crew spent six weeks at Down Hall Hotel, which they enjoyed all to themselves as it was closed, once again because of the COVID-19 pandemic.

The hotel itself is once again open to the public, though the show’s tent has now been removed from the grounds.

Prices range from just under £200 per night, with 98 rooms available to choose from, all individually designed to reflect the grandeur of the building.

The contestants weren’t completely alone as they were allowed to bring their partners and children to stay with them over the six weeks.

Everyone involved was also subject to rigorous testing throughout the process to ensure the safety of all involved.

The results will mean that despite the move and restrictions the show will still appear seamless when compared to previous series.

The tent will remain the same, so many viewers will likely notice very few changes.

Noel Fielding will be joining Matt Lucas as host, who is returning after proving to be a popular replacement after Sandi Toksvig left the show.

As for the judges, both Paul Hollywood and Prue Leith are back again, with Paul remaining one of the show’s original voices.

Channel 4 has not made any changes to the judging for this new series.

Great British Bake Off 2021 premieres on September 21 at 8pm on Channel 4.