Clear your Thursdays, because The Sex Lives Of College Girls is going to leave you wanting more. Co-creator and executive producer Mindy Kaling made us a raunchy female gaze-y college comedy for HBO Max that hasn’t been done before. The series stars Amrit Kaur, Alyah Chanelle Scott, Reneé Rapp, and Pauline Chalamet (before you ask—yes) as suitemates at the fictional Essex College navigating, well… everything. Trust me when I say that you’re going to be begging for the next episode after your first.

Here’s everything you need to know about when more episodes of The Sex Lives Of College Girls will appear on HBO Max, because the release schedule is admittedly a little unconventional! 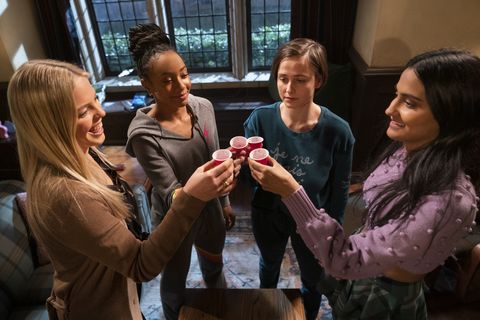 OK, the first two episodes dropped today (November 18) together. Then the next three new episodes will be released on November 25 a.k.a. Thanksgiving. The next three debut on Thursday, December 2—and the season will conclude with the final two episodes on December 9.

So it’s two, three, three, two. The episodes vary in length but most are about a half hour, so this is a nice little mini-binge you can knock out Thursday evening or spread out over the weekend. You do you!

This release date strategy is like a happy medium between a weekly show like Game of Thrones that you need a full seven days to recover from and a Netflix show that drops all at once like Stranger Things and you have to hibernate in order to avoid spoilers.

Yep! That’s the only downside. Don’t blink, because this Sex Lives of College Girl moment is going to be over before you know it. I’m honestly not mad, because there is a lotta good TV happening this month, but STILL.