Short of co-hosts Mark Humphries and Andrew Rochford remaking Dirty Rotten Scoundrels, the pair couldn't put their dynamic to better use than hosting this in-reverse quiz show where a correct but obscure answer provides victory. The format sounds odd, but on air it make swift sense, allowing viewers to do what all good quiz shows allow for: yell out their own answer at home. Humphries does the necessary contestant banter, but there's always an obtuse air to his accompaniment that suggests he's not about to be the next "Baby" John Burgess. The unanswered question that remains is whether Ten will give Pointless the time to build a loyal audience. It deserves a chance. CM 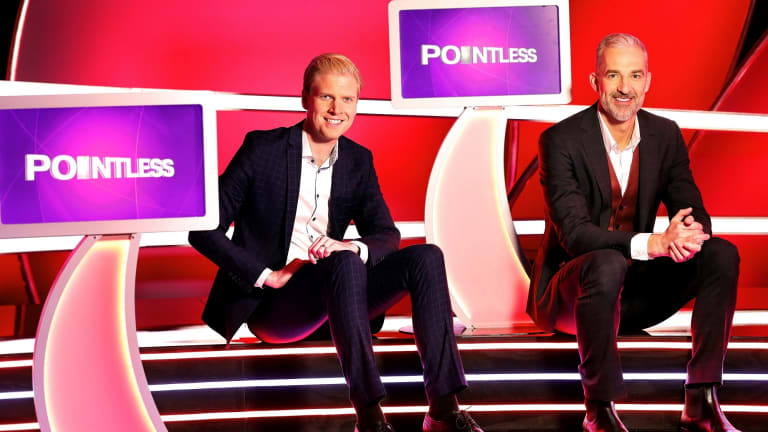 Europe's contradictions as a formal union are currently stark, but that's always been the case as Australian-born Cambridge University historian Christopher Clark explains in this glossy history. These back to back episodes, complete with dramatic recreations, cover Europe's thirst for expansion, which was equally driven by necessity and greed, and its vast and enduring cultural influence. It's an oversized topic, but Clark's appreciative warmth helps. CM

The guest's on this episode of Britain's top of the line talk show are wrestler turned Hollywood actor John Cena, martial arts icon Jackie Chan, and cheery cooking icon Jamie Oliver – even without the usual star power, there's enough incongruity in that selection to let the bubbling Norton generate some well-honed anecdotes and the odd moment of improvised hijinks. CM

Sammy Davis Jnr: I've Got to Be Me

"I'm coloured, Jewish, and Puerto Rican – when I move into a neighbourhood I wipe it out." In 1950s and 1960s America – a time when race was both a matter of life and death and a cultural crucible – the hyphenate entertainer Sammy Davis jnr was so popular that he crossed lines no one had previously tested. Samuel D. Pollard's feature-length documentary is a detailed, assured account of his life, revealing a natural entertainer whose talents always had to account for differing audiences; he survived his army service through impersonations of white movie stars and was later condemned by the black community for supporting Richard Nixon in 1972. Rat Pack aficionados can enjoy archival footage of Davis at work and play with Frank Sinatra and Dean Martin, although every public moment has a candid private reflection. CM