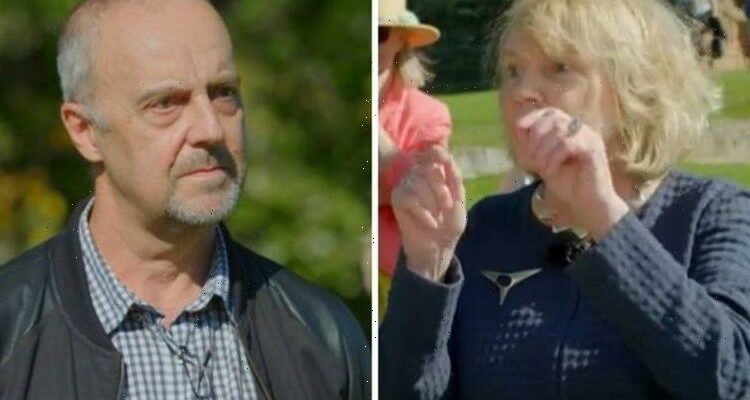 Antiques Roadshow was being filmed from Kenilworth Castle in Warwickshire. Judith Miller was delighted at the bright blue vases brought in by one person, and was quick to analyse their history. she was able to confirmed the age of the pottery creations, which would be worth thousands. The owner of the vases was left stunned on the BBC show after she surprised him with her estimation of the two hand painted items, which she described as being “rare.”

Upon seeing the two vases, Judith explained: “There some items on the Antiques Roadshow that you look at and you immediately go ‘this is Clarice Cliff’.

“There is absolutely no doubt about it. How did you get these?”

The guest replied: “They originally belonged to my grandmother. She worked in a China shop I believe in Shrewsbury in the late 1920s.

and this is very much the beginning of that period.”

She continued: “It’s totally Art Deco – this was so revolutionary.

“Most of the Staffordshire potters were still doing little flowers, and Clarice came along and said ‘No, I want something different’

and they often say about her that she was an ordinary girl with extraordinary talent.”

She added that the vases were “Incredibly creative.” Judith went on: “It’s a complete movement away from everything.

“And the funny thing was that the Staffordshire potters, the established ones, said it would never work, that nobody would ever buy these.

“Proved immediately, totally wrong. People like your granny loved them.”

“And if I look at the mark – Clarice Cliff, Newport Pottery, Burslem, England, Inspiration – the the Inspiration range – and this is the Persian, so that’s a hand-painted mark which tells me it’s an early example.”

When asked what he thought about the items, the owner said: “I was, as a young boy, attracted to the colours and sheer vibrancy.”

She explained that some ranges were very common but others, such as these vases, were far less so.

“This was quite an unusual range,” she commented. “So, we can’t say they’re a pair.

“We can say they’re two very similar vases and in terms of value, I would say that they are each worth about £2,000.”

“Goodness,” the guest said, taken aback. “I wasn’t expecting that.”

Antiques Roadshow airs at 8pm on Sundays on BBC One.