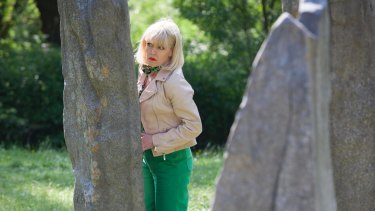 Agatha Raisin has well and truly picked up the Midsomer Murders mantle – given it a good wash and press and added a few sequins. The Cotswolds are as deadly a place as Midsomer ever was but Agatha and her gang bring considerably more quirk to the resolution of their murder du jour and one of the pleasures is seeing the way the "mood board" and other crime-solving accessories are deployed each week. Add Ashley Jensen's wonderful comic timing and gift for physical comedy and what's not to love?

The second of the Red Dog films never quite captures the magic of the first – not least because the dog isn't half the actor the original was. Seriously. Koko was just one of those dogs who always seems on the point of speaking. Phoenix, who stars here, is more your classic kelpie: good looking and athletic but with the sense that his mind is more on the paddock full of sheep than on you. On the upside the human performances, particularly from Jason Isaacs and Levi Miller, are very good and the Pilbara landscapes are superb.

Eurovision. Gold Coast. Ten Australian acts vying for a chance to perform at this year's competition. Need we say more? SBS is broadcasting the event live, hosted by Myf Warhurst and Joel Creasey, and the line-up is nothing if not eclectic. Everyone from Kate Miller-Heidke to drag superstar Courtney Act have put a heavily manicured hand up for a shot at stardom. And yes, you get to vote for the winner.