Mariana van Zeller is a badass. In just eight episodes of her new series on National Geographic, “Trafficked with Mariana van Zeller,” we watch the acclaimed investigative journalist talk to counterfeit money makers in a Peruvian strip mall, walk into the jungles of Mexico to have a talk with cocaine dealers, and learn about underground steroid experimentation in the quiet suburbs of Sacramento.

“I’ve always been attracted to the underworld,” van Zeller told IndieWire, ever since her first story as a journalist saw her moving to Syria at the start of the Iraq war. “I wanted to be close to the action,” she said. Close is an understatement; van Zeller is in the thick of the action throughout every episode and she thinks part of that might have to do with the fact that the worlds she’s walking through are often exclusionary to women. “I was filming a meth lab, for Season 2…and they [the dealers] told me ‘This is the first time we’ve ever had a woman here,” she said. “I think that helps in breaking [down] the walls. They feel more compelled and comfortable opening up to me, as a woman, and more likely to share their stories.”

In mulling on the question more, van Zeller believes that this desire to upturn the boys club that is investigative and undercover journalism compelled her to put herself in sticky situations. “No one is going to tell me that I can’t do something because I’m a woman, and I take that as a personal challenge,” she said. Van Zeller said the world of investigative journalism is one where women can thrive particularly well. “We are more powerful, as women, doing this kind of reporting. We are better in many ways at doing this kind of reporting than men are,” she said, especially with regards to empathy and listening.

The need for empathy is important, especially considering van Zeller’s goal is to show how black markets are not created in a vacuum but as part of a series of systemic breakdowns in a country, and the world, at large. “We seem to be surrounded by judgement,” van Zeller said. “Empathy is incredibly important and I wanted it, from the start, to be a huge part of this show.” But that’s not always easy to do, especially when the people she’s talking to are more often than not participating in truly heinous activities, like human trafficking. Van Zeller explains that talking to a self-proclaimed pimp who plies his trade on the streets of Los Angeles — “15 minutes from my house,” according to the journalist — was certainly a struggle. 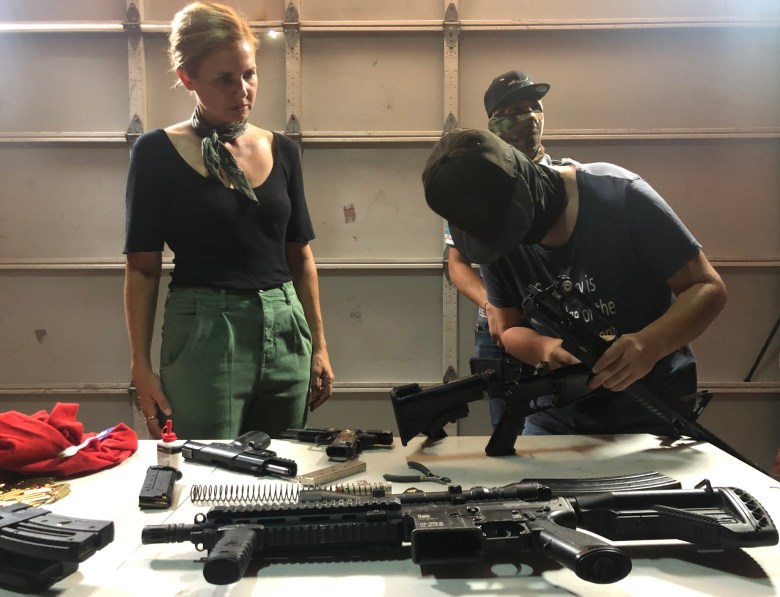 Mariana van Zeller observes Sinaloa Cartel gunsmiths as they work on their arsenal.

Once she started diving deeper into the man’s life, though, learning about the conditions of his upbringing and his lack of opportunities caused her to reevaluate her thinking. Many of the heroes in his neighborhood were pimps themselves. Van Zeller wanted it made clear that she doesn’t condone the actions of this subject, or any of the black market figures she talks to, but it’s understandable why many fall into that life. “By criticizing and closing our eyes to it, are we going to change anything in the world,” she said. “A lot of the change happens when there’s understanding.”

Something to be more cognizant of is the fact that the majority of van Zeller’s subjects are Black and brown people. “If you look at — not just here in the West but around the world — how our systems are put in place and how minorities are at an enormous disadvantage compared to the rest of the population you realize that it’s not really a choice, it’s much more lack of opportunities,” she said. Trafficking, in many ways, affords these people a level of power and respect on top of the financial security they’re missing in regular careers. “Black markets show how they operate but…[also] portray the people who operate [them] as a lot more like us than we like to believe.”

This could explain how van Zeller is able to get facetime with some of the most notorious figures engaged in these black markets. Access is a hot commodity, and van Zeller says she cultivated trust with high-level sources over the years as she rose up the ladder as a journalist. When she pitched “Trafficked” to National Geographic, she promised she would deliver never-before seen interviews, and it was a guarantee she almost didn’t deliver on. While filming the first episode on counterfeiting, van Zeller met with her contacts, free of cameras and audio.

“We call that our underground first date,” she said. At the end, the counterfeiter told van Zeller to prepare “to see amazing things tomorrow.” “I called National Geographic immediately,” she said. “I said, ‘We’ve got this. The show is off to an amazing start.’” The problem? The counterfeiters ended up ghosting van Zeller and her crew. “I was just thinking ‘I’m about to do my dream show…and everything just crashed and burned on the first try.” It wasn’t until she started from scratch, utilizing local journalists in the area, that everything came together.

But when dealing with people who could potentially harm you, van Zeller draws a line when it comes to chasing a story. “No story is worth a life,” she said, and while security and situations are planned and vetted there’s always a chance for something unpredictable to happen. In the episode focused on gun trafficking, van Zeller and her crew spent all day with a group of sicarios (hitmen) in order to understand their day-to-day routine. “We ended up going to see their gun bunker, where they keep all their weapons and didn’t realize a few of them had been snorting cocaine all day,” van Zeller said.

The combination of drugs, guns, and inadequate weapons safety training culminated in a shot being fired. “It was two inches from my foot and two inches from the entry to that bunker where [their director of photography’s] head was,” she said. “I got really angry with the gunmen and the head of the gunman that we were interviewing that day and told them this is unacceptable, you have to be accountable for the men you’re in charge of.” Who else but van Zeller could stand up to a Mexican sicario and tell them to be more responsible?