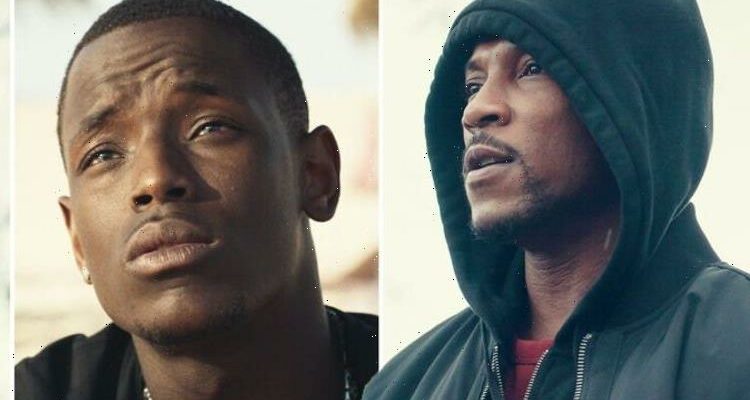 Top Boy: Walters says some of the show is not filmed in Hackney

Dushane (played by Ashley Walters) and Sully (Kane ‘Kano’ Robinson’) were back at Summerhouse in Netflix’s newly released Top Boy season two. And while the show’s characters and gritty drama have been keeping viewers hooked ever since the story’s early days on Channel 4, Top Boy has also become synonymous with its realistic depiction of working-class London.

However, during a recent chat on BBC Radio 2 with broadcaster Steve Wright, Ashley revealed there were one or two parts of London they weren’t allowed to show on camera.

“It’s got everything in it,” Steve began on Tuesday’s show. “There’s even a comedic side to it as well.

“But I mean, it’s fairly dark, isn’t it? And it’s so realistic – there is a mood, I don’t know what it is about the performances and the lights and the actual buildings and what have you.

“Presumably, it has been filmed at the estate in Hackney and out and about in Hackney, right?” Steve probed.

Delving into the details, Ashley replied: “We’re only allowed to use specific places in Hackney.

“Hackney Council don’t let us use everywhere – they have their own reasons for that which we respect.

“So we do have to move around a bit,” the Top Boy star went on.

He continued: “But the base of where we shoot is in Hackney and most of our places are on location.”

However, with filming taking place throughout the pandemic, Ashley admitted some scenes had to be filmed behind closed doors.

“This season we had to use a studio for some of our sets because of Covid,” he said.

Ashley clarified: “But usually, we’re 100 per cent on location which kind of helps to give it that realistic feel you’re talking about.

“The main element for that is the actors that we choose… we’re very sort of specific about street casting before every season.

“At least 70 per cent of our cast have never acted before,” Ashley admitted. “Our casting director Des Hamilton will go out before we start shooting,

“Literally, (he’ll) pick people from the streets, he’ll go into schools, goes into youth clubs and that’s what gives it that raw side.

“I think that’s what people pick up on,” Ashley concluded.

Among these undiscovered stars include the likes of Ats actor Keiyon Cook, Aaron star Hope Ikpoku Jr, and Araloyin Oshunremi who plays Stef.

The second season of Top Boy soared to the top of Netflix’s charts within days of its release.

And while a third season of the Netflix revival is yet to be confirmed, there are a number of cliffhangers which have left fans on the edges of their seats.

None least the shocking murder of Jamie (played by Micheal Ward) in the season two finale’s final moments.

His feud with Sully came to an emphatic close as, despite a newfound alliance with Sully’s righthand man Dushane, the drug dealer shot Jamie twice in the chest and head, leaving his brothers inconsolable.