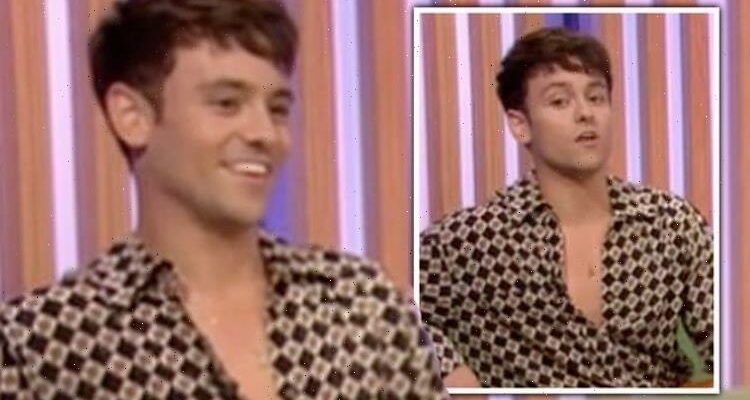 The One Show: Tom Daley makes his presenting debut

Alex Jones returned to The One Show on Thursday to take a break from her maternity leave for two instalments of the BBC show. On Friday, she was joined by Tom Daley who was making his presenting debut and BBC viewers couldn’t help but comment on the Olympic diver’s choice of 70s inspired attire for the evening.

Tom opted to wear an geometric pattern shirt with a few buttons undone tucked into a pair of flared trousers.

Commenting on the look, viewer @VillaClaretBlue tweeted: “Tom Daley has turned up as 1972 #TheOneShow.”

@Howardabull shared: “Do your shirt up for goodness sake! #TheOneShow.”

Kicking off Friday’s show, Alex announced: “Last night we promised you a bumper show of guests and we hope it’s not going to disappoint.”

“And now she’s joined forces with best selling author Louise Penny to write a gripping tale of drama and intrigue in the White House something she knows all about – it’s Hillary Rodham Clinton and Louise Penny,” Tom introduced.

“It’s good to see you again [Hillary] because we’ve met before.”

“I know we have Tom and I just want to start by congratulating you,” she replied.

“You just thrilled me at the Olympics because I had met you and of course I know your husband [Dustin] Lance [Black] and [we have] mutual friends.

“I was in your corner all the way even though you were on another team.”

The Olympic diver said: “Thank you for supporting Team GB with that.”

Alex added: “Well that is the perfect opening very nice to see you too Louise we’ll talk to you both about the new novel very shortly.”

Duran Duran’s Simon Le Bon and John Taylor appeared on The One Show to discuss their new album Future Past.

The co-stars spoke to Alex and Tom about their new BBC comedy The Outlaws.

The One Show airs on BBC One on weekdays at 7pm.