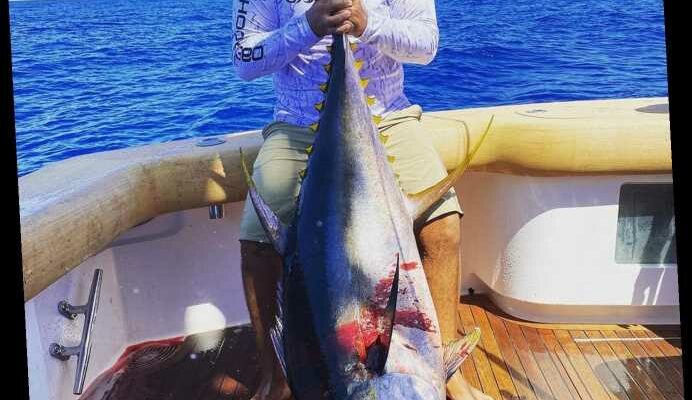 Connor Cruise is still cruising in the open waters.

The son of Tom Cruise and Nicole Kidman recently posted a rare photo of himself on Instagram showing off his latest catch. The avid fisherman tagged his location in Costa Rica and said the fish is a yellowfin.

"Yellowfin were chewing today," he wrote alongside the pic, in which he's holding the tail of the massive fish while sitting on his boat.

Connor, 26, continues to lean into a fishing over a year after a source told PEOPLE he was getting into the hobby.

"Connor lives in Clearwater, which is the church's main hub. He still deejays but he has really become a big fishing guy. He's content with living a quieter life," the source told PEOPLE of the Florida beach town, where the Church of Scientology has its headquarters. His shared beliefs with his superstar dad have helped the two remain close, the source previously said. Connor and sister Bella, 28, also adopted by Cruise and Kidman, have been part of the religion since they were kids.

"Connor and Isabella grew up in the church of Scientology, they've been members since they were kids," the source said, adding that the siblings "are completely dedicated scientologists just like Tom."

Although Connor mostly stays out of the spotlight, he does step out with his father from time to time, and the pair were most recently photographed together in London in October 2019.

A source previously told PEOPLE that "Connor has a pretty simple life in Clearwater."

"He lives in his own home in a Scientology community. His life is deep-sea fishing. He has a lot of friends and seems very well-liked."

Bella, a fashion designer who uses her parent's famous last names as her professional name, lives in London with her husband Max Parker, whom she married in 2015.