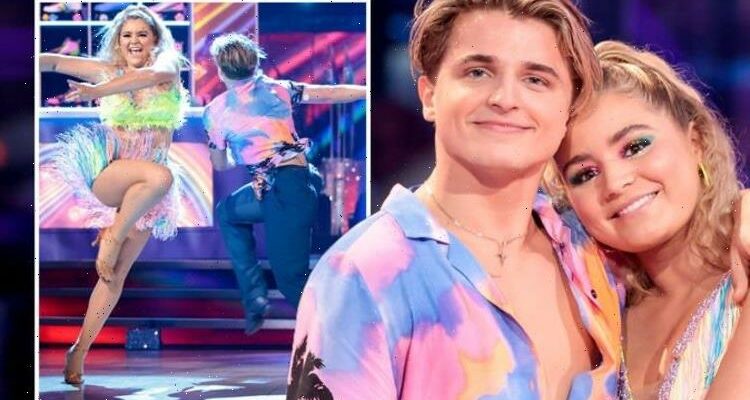 With Strictly Come Dancing now in its quarter-final stage, the competition is as fierce as ever among the celebs to see who will lift the Glitterball Trophy. Narrowly missing out on a place in the final stages was Tilly Ramsay and her pro partner Nikita Kuzmin after the two lost in this past weekend’s dance-off to Rhys Stephenson and his pro Nancy Xu. Speaking on Tuesday’s Good Morning Britain about the BBC competition, former professional AJ Pritchard discussed the remaining stars and admitted Tilly’s final performance “didn’t go well”.

Tilly and Nikita had decided to take on the Samba for their Week 10 routine this past Saturday but it didn’t land them in good stead on the leaderboard.

In fact, the pair ended up finishing bottom of the pack with a score of 30, behind Dan Walker’s 31, and Rose Ayling-Ellis’ 33.

CBBC’s Rhys landed in the dance-off with Tilly and was unanimously saved by the judges to remain in the competition.

Debriefing about the weekend with Susanna Reid and Ben Shephard on GMB, AJ began by defending BBC Breakfast’s Dan against some fans who’ve angrily claimed the show is “fixed” to keep him involved.

Discussing the different routines, AJ continued: “I think Rumba is definitely one of the worse ones, if not the Samba just kind of knocks it off the leaderboard for being kicked out -“

“So he’s got through the Rumba, hasn’t he?” Susanna interjected, highlighting the hurdle Dan has gotten over.

“I think that’s his partner’s favourite though, isn’t it?” Ben added, referring to Nadiya Bychkova.

AJ then tipped Dan to make it all the way to the final before Ben weighed in: “Why – and I’m sort of nervous to be asking – why is the Samba more dangerous than the Rumba?”

Delving into the details, AJ explained all to Susanna and Ben.

“Ummm, you’re quite exposed and using those hips, there’s a bent leg to strengthen the straight leg – the technique is much harder,” AJ began.

He continued: “And therefore, because it’s quicker the technique’s harder, it never goes too well.”

Delivering his first slice of rather brutal assessment of Tilly’s routine, he commented as a clip of her Samba came up on-screen: “As we can see on the screen right here.”

Continuing his critique, he said: “Tilly Ramsay, it didn’t go too well for her either.

“She gave it everything, she’s quite clearly living her best life here but an extra week would’ve helped, I have to say.”

Ben and Susanna then chimed to joke: “Avoid the Samba, avoid the Rumba!”

With Tilly no longer on Strictly Come Dancing, the competition has been whittled down to just five famous faces.

Rhys kept his spot in the contest after surviving the dance-off and he finished above both Dan and Rose on Saturday’s leaderboard.

Leading the pack heading into the quarter-finals, however, are John Whaite and Johannes Radebe.

The pair narrowly missed out on a perfect score of 40 while AJ Odudu and Kai Widdrington also look poised to put up a challenge for the coveted trophy.