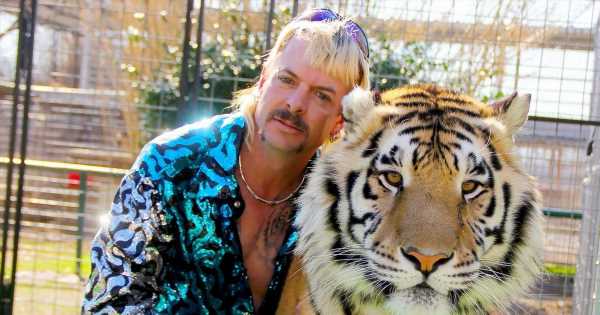 Joe Exotic has announced he has been diagnosed with aggressive form of cancer as he shared a health update from prison.

The 58 yes old, whose real name is Joseph Allen Maldonado-Passage, took to his Instagram feed via his team on Wednesday 3 November to plead for his release from jail in order to seek treatment.

He also made a remark claiming his Tiger King co-star Carole Baskin, who will star in the second season of the show, will be overjoyed by the news of his illness.

"Everyone, It is with a sad face that I have to tell you the doctors called me in today to break the news that my prostate biopsy came back with an aggressive cancer, I am still waiting on the results from other test as well," he shared in the caption.

He then quipped: "Right now I don’t want anyone’s pity and I’m sure Carole Will have her own party over this!"

Joe went on to ask his 367,000 followers to be "his voice" to ask for his release from prison, where he is currently serving a 22 year sentence for 17 charges of animal abuse and two counts of murder for hire.

He wrote: "What I need is the world to be my voice to be released, they have the proof I DID NOT DO THIS! And there is no reason for the district attorney to drag this out,

"So I can go home and get treatment on my own or enjoy what life I have left with my loved ones! Say a prayer everyone & be my voice love #joeexotic #exclusive #breakingnews," followed by a crying emoji.

Joe first shared his prostate cancer diagnosis in May this year. At the time, he took to Twitter to explain the situation as he wrote: "John Phillips has received my medical records from FMC Fort Worth and my PSA count came back very high for prostate cancer.

"The prison has approved testing to verify what stage it is in.

"My body is tired, I have lost a tremendous amount of weight, the mouth sores are out of control, I throw up more than I eat."

He then asked for help to get President Joe Biden and Vice President Kamala Harris to pardon him after former leader Donald Trump previously said he would "look at" the conviction.

"I don't want anyone's pity, what I need is when John Phillips gets the evidence he is working on, I need the world to help him get President Biden, VP Harris and the Attorney General to listen to the evidence and see that it’s not just city cops out of control with corruption, but his very own Department of Justice and make this right and sign that pardon that Trump left behind so I can go home and get proper medical care and proper food," Joe went on to explain.

He added: "Thank you for all the love and support from all over the world.

Stay up to date with all the latest on Joe Exotic by signing up to OK!'s daily celebrity newsletter.