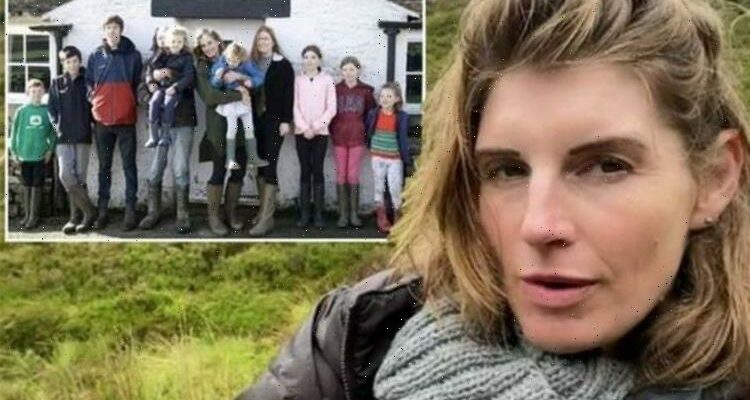 Amanda Owen is known to fans as the Yorkshire Shepherdess on her Channel 5 series Our Yorkshire Farm. The 47-year-old has always been open about her personal life and her nine children, regularly sharing family photos on her social media sites. However, when she spoke with Sophie Ellis-Bextor about motherhood, the farming star decided to share details about the traumatic birth of her second child.

Amanda met up with singer turned podcast host Sophie in London last year to have an open conversation about parenting, birth and farm life.
In the unearthed episode of Spinning Plates with Sophie Ellis-Bextor, Amanda explained two of her nine children were born prematurely.
She told the host her second child, with her husband Clive, was born at just 31 weeks old.
“I had him at home and I thought that he was dead,” she explained. “I was at home and it was so quick and there was blood and a baby, but there was no sound whatsoever. “

The shepherdess told Sophie the local river was flooded at the time so medics could not get an ambulance across the river to tend to her and the newborn.
“We really live out in the sticks,” Sophie said when describing her Yorkshire home.
Medics eventually arrived and set off on a two-hour journey to the nearest hospital with Amanda and newborn baby Reuben.
She recalled: “I remember I was in a daze and it felt like it hadn’t happened to me and I was looking across at Reuben who was three pounds.

“They [medics] had an oxygen mask and I remember they were trying to scrunch it [to make it fit] and then one of his lungs collapsed. I got a phone call in the middle of the night to say one of his lungs had collapsed.
“Then I got another phone call to say his other one had collapsed and it’s horrible when you look back at it. But somehow you kind of put it aside don’t you?”
Sophie agreed and explained she had a similar experience with her second child, but she said she never wanted anyone to feel sorry for her.
“I wanted to set the tone and people to say congratulations, and not to worry”, Sophie told Amanda.

By the time Amanda gave birth to her daughter Nancy, who was her ninth child, she was quite accustomed to giving birth in hospital and driving 70 miles back to her home in Upper Swaledale.
“You’ve got your other eight at home and they need you too,” Sophie interjected.
Amanda replied: “Yes, and that’s when it gets a bit complicated doesn’t it? You’ve got other things going on and you have to keep it real.
“And I think working with livestock and animals you have to keep it real.”

Spinning Plates with Sophie Ellis-Bextor is available on Spotify and iTunes, and Our Yorkshire Farm episodes are available on My5.