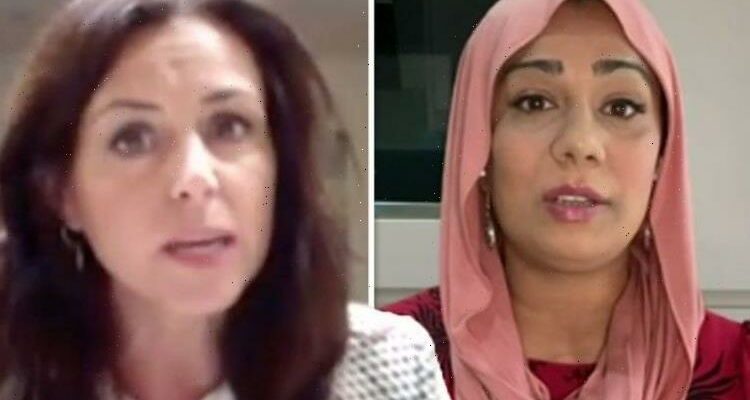 This Morning: Debate over whether children should be vaccinated

Eamonn Holmes and Rochelle Hume chaired a discussion on whether the UK should vaccinate healthy 12 to 15 year-olds on Tuesday’s This Morning. The Pfizer-BioTech vaccine is currently available for all 15 and 17 year-olds and vulnerable 12 to 15 year-olds. Dr Nighat Arif strongly recommended children receiving the Covid vaccine while guest Beverly Turner furiously disagreed. This Morning viewers weren’t impressed with the debate and took to Twitter to comment.

Beverly argued: “I’m hearing daily from parents who are saying, ‘I’m not sending my children back to school in September because I’m so frightened that they’re going to give them a drug that I don’t want them to have.’

“At the moment these schools can’t give our kids Calpol without our consent.

“Have we truly lost our minds that we’re talking about giving them an injection that they do not need?”

Dr Nighat replied: “We need to look at the vaccine programme that’s being rolled out in other countries.”

Read more: ‘How did the Yanks leave behind £62bn of armoury?’ Eamonn Holmes rages

“We already have America that’s been vaccinated 12 year-olds and above,” she continued.

“We have Germany, Italy, Spain that have been vaccinating [children].

“In China, they’ve been vaccinating 12 year-olds and above and their finishing their programme in that age group in October this year.”

“The vaccine is far safer than infection from Covid-19 and that is what we need to focus on,” she added.

“We need to focus on getting numbers low as well and keeping children in school.”

Summarising both of their points, Eamonn said: “Dr Nighat Arif who believes children are safe to have the vaccine and mass vaccination is the best way to combat Covid and keep our children in school.

“And Beverly Turner there, commentator, who doesn’t want her children to have the vaccine.”

One tweeted: “Why do you keep inviting on Beverley Turner regarding COVID vaccinations? I absolutely think you need to represent both sides in a debate however she is always SO angry when she talks about her side of the debate, in contrast to the doctor who was very calm.”

“How that doctor managed to keep calm during that meltdown. I don’t even know. #ThisMorning,” another argued.

Someone else shared: “@thismorning – why does Beverly Turner have to express her views in such an angry and patronising manner – I would be more inclined to listen if she calmed down a bit and stopped interrupting!”

However, another viewer disagreed: “@beverleyturner Thank you so much for putting our side of the argument across so well on @thismorning today.”

While a sixth pointed out: “#ThisMorning I do wish on important issues you would have contrasting opinions from equally qualified people.

“It’s so unfair to use a doctor arguing for vaccines for children and a journalist against. There are plenty of equally professional people with opposing views.”

This Morning airs on weekdays on ITV at 10am.